University research administrators from across Canada gathered at U of A to discuss common issues in an age of increasing global partnerships. 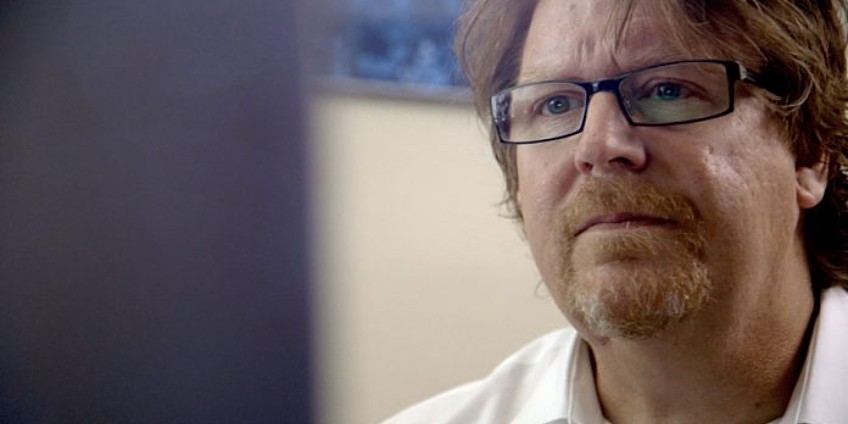 U of A criminologist and sociologist Kevin Haggerty was among a group of researchers at a recent U of A symposium on the ethical complexities of technology development and international research. (Photo: Research2Reality)

Don’t ask Kevin Haggerty about 1984. Or The Handmaid’s Tale.

The University of Alberta professor of criminology and sociology studies surveillance for a living, so he’s not one to indulge in dystopian fantasies.

Over the past quarter-century, Haggerty has studied the steady rise of cameras, smart devices, drones and facial recognition. Technology has coalesced into a network system capable of repressing ethnic minorities, as is occurring with the Uighur Muslim minority in northwest China.

“Maybe this wasn’t planned, but it was foreseeable,” Haggerty said. “For somebody in my world, who’s been studying surveillance for 25 years, this was screamingly predictable.”

Haggerty was among a group of researchers who gathered at the U of A last month for a day-long symposium on ethical tripwires like “dual-use” technologies—beneficial advancements that can also be used for undesirable ends. Dual-use concerns also plague fields like genetic engineering, artificial intelligence and virology. The symposium also tackled thorny issues around international research, including data sharing, ethical standards and partnering with institutions that fall under regimes with very different worldviews.

The U of A is just one of hundreds of institutions grappling with the recent fallout over Huawei, the telecom giant facing research moratoriums and sanctions because of security concerns with the Chinese government.

For Matthias Ruth, vice-president of research at the U of A, it’s a much broader topic than any one country or company. Huawei has been a wake-up call to think about how Canadian post-secondary institutions function in a changing world.

Knowing that security is a pressing concern among other universities and government agencies, Ruth spearheaded the idea of a national symposium bringing academics together at the U of A.

“As soon as I started to talk to people, it totally resonated,” Ruth said. “It’s a set of questions we should have probably asked 20 or 30 years ago.”

Easy answers are unlikely, Ruth acknowledged. Public universities are necessarily international institutions, partnering with companies and organizations transcending national borders. They’re also local institutions and economic engines, training a workforce and incubating ideas that will shape the future. The curiosity of individual researchers—from around the world—drives the question of the day.

You can’t simply disrupt that ecosystem without major consequences. As an institution, it’s not enough to simply shrug or wait for the federal government to intervene. That could have drastic implications for a university positioning itself not only as an incubator of ideas, but also as a global leader in ethics, Ruth noted.

“There’s only so much we can do as a university. We can protect ourselves, our researchers and our students,” Ruth said. “We need to find some balance.”

Within Canada’s post-secondary sector, Ruth sees a national conversation as an important way to prevent ethically problematic projects from getting shopped around until a buyer is found. The symposium is a first step to make researchers across Canada aware of potential pitfalls in their fields. Another will be developing guidelines and training modules, along with finding ways to help researchers hone their own smell tests.

Haggerty sees the conversation as a sort of return to the “nuclear physicist problem,” the ethical quandaries researchers grappled with during the Cold War. Then, as now, technology and research itself wasn’t inherently good or bad. But it wasn’t neutral, either.

Conversations need to happen at early stages, Haggerty said, or researchers risk defaulting into well-trodden answers about academic freedom and the unpredictability of technology. Restrictions on animal testing or use of fetal tissue have improved research without grinding science to a halt. Firewalls and safeguards don’t happen by accident.

In the realm of surveillance, Haggerty believes a technological halt is impossible. We’re in the midst of an irreversible “world-historical transformation,” he said, a shift similar to the historic changes that led to human migration to urban centres. It was a sociological transformation that altered nearly every aspect of life.

While the speed of this change has already spawned a renewal of Orwellian fictions, Haggerty has enough real-life worries to occupy his days.

“It’s something that’s massively transformative,” Haggerty said. “If I’m going to go somewhere else to relax, I’m not going to be reading sci-fi.”