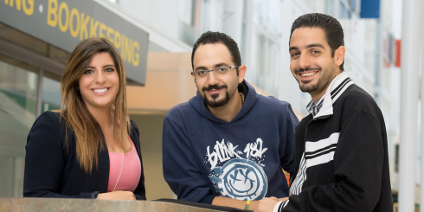 (From left) U of A alumna and volunteer Deanna Dow with Bassel and Aref Sayegh in HUB Mall (Photo: Richard Siemens)

Crew of volunteers step up to offer ongoing support. 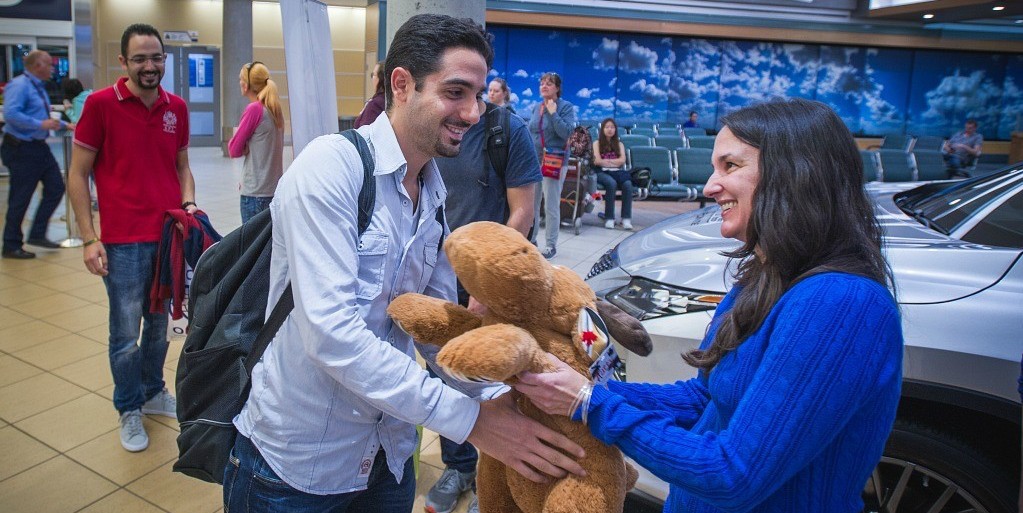 When Aref Sayegh, 27, stepped off a plane at the Edmonton International Airport in late August from Lebanon, his twin brother Bassel was waiting to give him a hug—along with a group of University of Alberta volunteers bearing a toy moose.

The stuffed animal, a fun Canadian icon which now has its own chair in his home, serves as a reminder to Aref—who was raised in the war-torn Syrian city of Aleppo—of the warm welcome he received from the U of A contingent as he and his brother start their studies on campus.

“I’m lucky to be in this group; I feel grateful,” Aref said. He joined Bassel—who arrived on campus last December supported by church members of St. Joseph’s College—and are now waiting to be joined in Canada by their parents and a younger brother who are living in Lebanon. The family is waiting for an arrival date from the Canadian embassy.

The Sayeghs are among seven Syrian students starting classes this fall through the U of A’s President’s Award for Refugees and Displaced Persons. They’re being supported for the next year by teams of volunteers who’ve pledged their time to help the refugee students settle into their new lives on and off campus. The teams were pulled together recently by University of Alberta International (UAI), which reached out to the campus community asking for help.

Volunteers step up to help out

For 26 years, the U of A has welcomed one refugee student annually through a long-standing campus program run by a student committee of the World University Service of Canada (WUSC), but the club didn’t have the volunteer capacity to assist such a large number of people. Four of the Syrian students came to the U of A this year via the WUSC program. To welcome them, UAI got busy building a volunteer program and putting out a call for willing helpers, said Nancy Hannemann, director of global education for UAI.

The response was swift, with 60 applications eventually whittled down to a crew of 22. Each team is a mix of students, staff and alumni, all with different skills they are using to guide the new arrivals through their first months here.

“We wanted the volunteers to have a diversity of knowledge and experience, so they can offer a broad perspective on what life is like here and provide as much guidance as possible,” Hannemann said. Whether applying for a social insurance number or opening a bank account, “students need to have assistance in terms of understanding how the system works.”

Each group includes a volunteer who speaks Arabic and, if possible, someone from the same area of study as the student.

The new arrivals get a hand with picking up basic skills, including how to use the telephone system, dressing for winter, shopping for groceries and using city transit. The volunteers, who took training that included an overview of Syrian geopolitics and the needs of newcomers, also provide social support, checking in with their students at least a couple of times each month.

Aref said he’s been getting plenty of help—he hears from at least one of his six new friends every day, usually by text or email. “I feel like every week they have something new for me, something to do. They are introducing me to the Canadian culture.” So far, he and his brother have gone picnicking at Hawrelak Park and attended orientation week events with UAI volunteers, with more plans in the works.

Aref plans, for instance, to check out sports activities with fellow student Mohammed Elyasi, who has also toured him around campus and helped him apply for a campus ID card. The pair, both graduate students in the Faculty of Engineering, also share a class—and similar situations as newcomers to Canada.

Elyasi, who arrived from the Middle East 14 months ago, has an idea of what Aref is experiencing. “I wanted to help because I know it is hard coming to a new place. It is hard to be an international student and to have difficulty speaking English and communicating with colleagues doing research, learning new course material. The beginning is not easy.”

Elyasi wants to help Aref get a smooth start with his studies. “Knowing that he is doing well in his courses and is settled, these things make me happy.”

Also giving Aref a hand is Deanna Dow, a U of A alumna and staff member. Of Syrian heritage herself, Dow feels a kinship with the Sayeghs. “I feel like I’ve got two new brothers, and I want them to feel like Edmonton is home.”

As an exchange student in Scotland some years ago, Dow also knows the feeling of being alone in a foreign country. She learned how to speak Arabic as a student, and chats with them in their native language—a gesture Aref appreciates.

“Sometimes when you cannot express yourself in English, it is helpful,” he said. Dow has also offered to drive them when they need to go places and, like the rest of the volunteers, will continue to include them in social events, especially around holiday time.

Long-term support is key to helping newcomers settle in.

“After the first flurry of excitement passes, international students adjusting to a new culture may sometimes feel stress and that has a potential impact on their mental health,” Hannemann noted. “We ask the volunteers to be friends to the students, to call them, to include them in social activities, to invite them to dinner, to support them throughout the year.”

Enrolled in the faculties of arts, business, engineering and science, the Sayeghs and the other new arrivals join two students from Syria who began their studies at the U of A last January. The President’s Award, announced last year, covers the cost of tuition and living expenses for up to 10 undergraduate or graduate Syrian students in 2016. The students were welcomed by U of A President David Turpin at a reception Sept. 12.

Ultimately, UAI wants to make sure the students, forced from their homeland and leaving behind their lives and families for the privilege of a university education, feel comfortable enough to succeed on campus.

“We want them to succeed at whatever they are pursuing,” Hannemann said, “and our volunteers are committed to helping them get there.”