Violence and hardship made it impossible for Ghada Bachour to do research or teach in her homeland. Now she has found a welcoming place to continue her work. 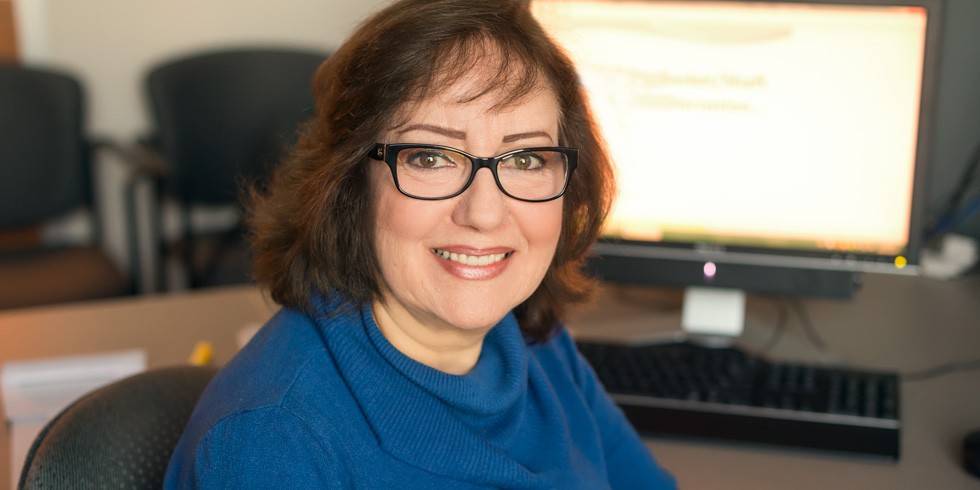 Ghada Bachour is the second researcher to come to UAlberta from Syria through the Scholar Rescue Fund. (Photo: Richard Siemens)

Among the new faces that arrived at the University of Alberta in September is a professor and researcher whose journey to campus was longer than most.

Ghada Bachour, a researcher in the pharmaceutical sciences, came from the University of Aleppo in Syria as the second scholar to receive a fellowship at the U of A through a program that supports visiting appointments for threatened scholars to continue their work in safety at partnering academic institutions.

Bachour was on faculty at the University of Aleppo for more than two decades, even through recent years that have seen its city, formerly Syria’s commercial hub, turn into a frontier of the country’s civil war. The influx of extremist groups such as ISIS has intensified the hardship of daily violence and the scarcity of basic amenities.

“I decided to leave Syria this year when conditions became very difficult and unacceptable there,” Bachour said. “We were under constant threat of bombs and falling missiles, which sometimes reached the classrooms at the university. Teaching and research became impossible under these circumstances.”

Fortunately Bachour found out from a colleague about the Institute for International Education and its Scholar Rescue Fund. The U.S.-based institute is a not-for-profit organization committed to international education and training. Since 2002, it has assisted more than 570 scholars from 50 countries, placing them at more than 300 host partner institutions around the world. Bachour is the second scholar to come to the U of A through the Scholar Rescue Fund since the university formally agreed to jointly fund participation in the program in 2013.

“University administration and the people who work at University of Alberta International as representatives of the Scholar Rescue Fund there had a great role of helping me to come and work at the U of A in a safe and secure atmosphere,” Bachour said. “They also helped me to find an appropriate residence and obtain the necessary documents for my residence in Canada.”

She added that her new colleagues in U of A’s Faculty of Pharmacy and Pharmaceutical Sciences have been welcoming, and are helping her find opportunities to work on research in her area of specialization.

Britta Baron, vice-provost and associate vice-president (international), said she hopes the U of A will serve as an example to other post-secondary institutions in accommodating and supporting Syrian scholars and students looking for safe places to teach, conduct research or pursue their education.

"There are now two professors from Syria on campus as visiting scholars. We are hoping that the University of Alberta can set an example by providing much-needed support to professors and students who wish to continue their research and studies in a safe environment,” Baron said. “The campus community has provided a great deal of support—many people have helped out in a number of ways. The Faculty of Engineering and the Faculty of Pharmacy and Pharmaceutical Sciences have shown great flexibility and hospitality in this effort. If other universities in Canada and beyond follow, we can all make a real difference."

Last year, Abdul Ghafoor Al-Shehabi became the first foreign academic to come to the U of A under the auspices of the Scholar Rescue Fund. A researcher in aerospace engineering, Al-Shehabi also taught at the University of Aleppo before coming to the U of A’s Department of Mechanical Engineering. He obtained refugee status shortly after his arrival, and is in the process of obtaining permanent residence in Canada. His fellowship under the Scholar Rescue Fund has been extended into 2016.