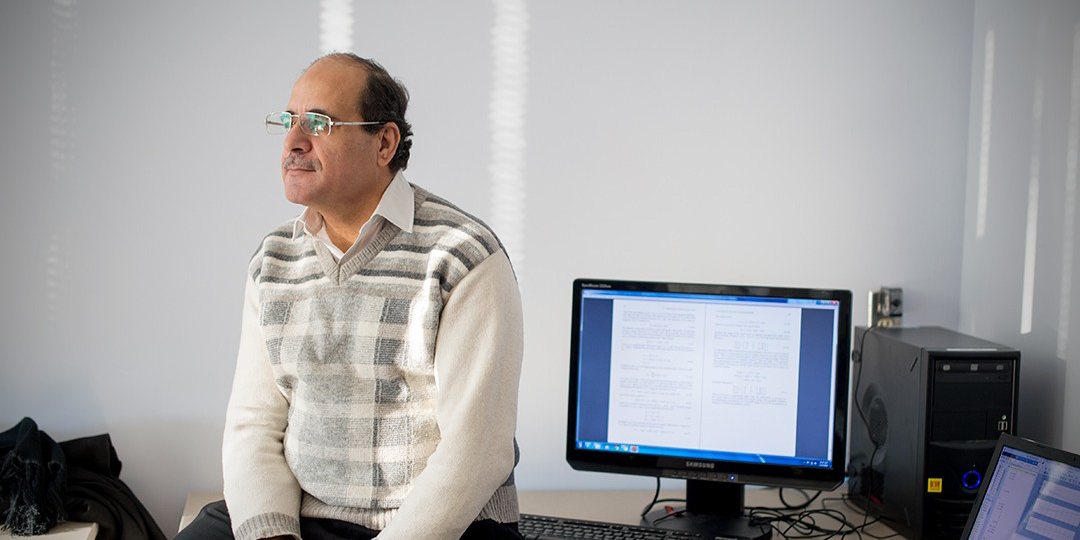 Abdul Al-Shehabi came to UAlberta from the University of Aleppo in Syria thanks to a partnership with the International Institute of Education and its Scholar Rescue Fund. (Photo: Richard Siemens)

(Edmonton) As an advanced scholar of aerospace engineering, Abdul Ghafoor Al-Shehabi has had many opportunities in recent years to leave his native Syria for short-term visiting positions at western post-secondary institutions. But he always returned to his job at the University of Aleppo’s Faculty of Mechanical Engineering in the hope that the turmoil gripping his country could somehow be resolved.

But living and working in Aleppo became increasingly untenable for Al-Shehabi as the war in Syria intensified and the campus itself became a target of attacks. In addition to the danger presented by battling civil factions and the influx of extremist forces into what had been the commercial hub of Syria, runaway inflation compounded the hardship brought on by war-ravaged infrastructure and scarcity of the amenities of life.

“Imagine, water only comes out of our taps once a week, you get maybe one hour of power a day,” Al-Shehabi says. “Some people take advantage, bring their generators and sell power. I bought two amperes of electricity for less than 10 hours of power a day—it cost me one-fifth of my salary.”

With his financial resources stretched to their limits, Al-Shehabi took an American colleague’s advice and sought help from the Institute of International Education (IIE) and its Scholar Rescue Fund, which supports visiting appointments for threatened scholars to continue their work in safety at partnering academic institutions.

Within a few months of being accepted to the program, he was on his way from Syria to begin a 10-month post-doctoral fellowship in the University of Alberta’s Department of Mechanical Engineering.

“If I had wanted to leave, even as a professor, I didn’t even have the salary to manage my life,” Al-Shehabi says. “I really appreciate the U of A accepting me and hosting me. Without the IIE and the U of A, I would not have been able to leave.”

The IIE is a U.S.-based not-for-profit organization committed to international education and training. Since 2002, it has assisted more than 570 scholars from 50 countries, placing them at more than 300 host partner institutions around the world. The U of A's Faculty of Agricultural, Life and Environmental Sciences hosted a scholar from Africa four years ago. However, Al-Shehabi is the first scholar to come to the U of A under the Scholar Rescue Fund since U of A President Indira Samarasekera formalized the university’s commitment to jointly fund participation in the program in 2013.

Britta Baron, vice-provost and associate vice-president (international), says the U of A is honoured to provide a safe, secure space for collaboration.

"The University of Alberta is firmly committed to the protection of academic freedom ​at all levels. We are glad that our university can make a contribution to this initiative, and I am particularly grateful to the Faculty of Engineering for welcoming a scholar to their team and making an important and meaningful contribution to human rights and the protection of academic freedom."

Al-Shehabi arrived in Edmonton at the beginning of October and, having earned his PhD in flight dynamics and control at Old Dominion University in Norfolk, Va., says the adjustment to North American culture has not been too difficult. He’s keen to resume his research into fuzzy logic control and navigation systems for unmanned helicopters, and excited by the prospect of potential collaboration with Canadian academics in his field.

“I must achieve something while I’m here,” he says. “For the last three years in Syria, it was difficult to achieve anything. I thank the U of A for a safe place to live and do my research.”