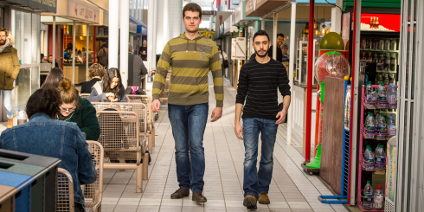 Alrayes and Jabbour both say they've been welcomed with open arms at UAlberta and in Canada.
“

I thought, which is closer, death or graduation? 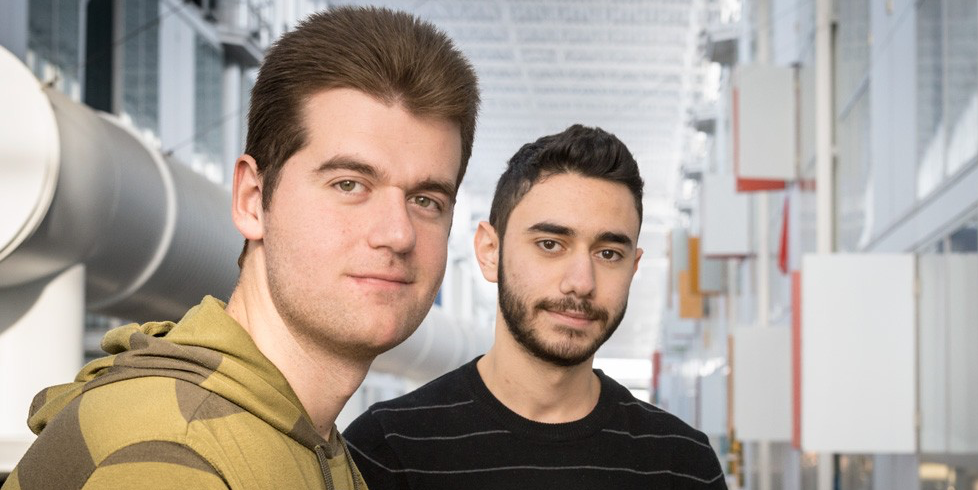 Naseem Alrayes (left) and Badi Jabbour are the first recipients of the President's Award for Refugees and Displaced Persons, which covers tuition and living expenses for up to 10 Syrian students in 2016. (Photo: Richard Siemens)

While full of mixed feelings, Naseem Alrayes is for the most part elated to be starting a fresh chapter in Edmonton. Life was becoming unbearable in Damascus, with missiles flying overhead and “death chasing me everywhere I went,” says the Syrian student.

It was an excruciating decision to leave the Syrian capital, because he was so close to finishing his fifth and final year of medical school. Coming to Canada could mean having to do that training all over again, this time in English and separated from family. But the country’s devastating civil war was escalating all around him.

“In my last days there, a missile landed not far from my home, and the whole building was levelled. On another day a bus exploded just down the street from university housing. So I thought, which is closer—death or graduation?”

Alrayes’ parents, both doctors, had already fled to Saudi Arabia, so he was able to apply from there for a permit to study in Canada. He applied to, and was accepted by, a number of Canadian universities, but in his mind the choice was simple. His mother had already heard about the University of Alberta while finding a school for his younger sister in Ontario, and she felt it offered the most fruitful opportunity, “a chance that will never come again in your life,” she told her son.

And according to Alrayes, the U of A welcomed him with open arms. “When they accepted my application, they also sent a letter to the Canadian embassy, which is something that really expedited my permit. I really felt the touch of humanity, and the U of A’s reputation was truly great." So far, he says, he’s never encountered a “more caring environment than this university.”

Because of his outstanding academic record, Alrayes was also offered the U of A’s President’s Award for Refugees and Displaced Persons. It covers the cost of tuition and living expenses for up to 10 undergraduate or graduate Syrian students in 2016.

Alrayes arrived at the U of A this month and has begun taking courses toward a fast-tracked science degree. Repeating medical school is still an option, he says, but he may choose instead to pursue pathology or genetics.

Although there is much to look forward to in his newfound home, he carries “a true pain” in his heart for the mother he was forced to leave behind in her time of need.

“She was diagnosed a few months ago with an advanced level of breast cancer, and I am her best friend. She is now getting chemotherapy in Saudi, but for such a condition you need psychological support, and I was that support. I truly feel sad I left her in this situation. So if I had one wish, it would be for her to come here and continue treatment."

On that score, at least, Badi Jabbour was somewhat luckier. This Syrian student was able to travel to Edmonton about six months ago with his mother Ghada Bachour, who landed a research appointment in pharmaceutical sciences at the U of A through its Scholar Rescue Fund.

Jabbour had just finished his first year of medical school when the violence became too much to bear in his home city of Aleppo, the largest in Syria.

"We just couldn't live in our house anymore,” he says. “We were living between two very dangerous areas, and there were missiles that several times hit our apartment block."

Once his mother secured her job at the U of A, the university reached out to make his own application process as smooth as possible, says Jabbour. "At that time I didn't have a study permit or any official documents, so they really made it easy."

He’s now taking one science course and some ESL training to begin his science degree. He admits the language barrier is tough, however, because he has only rudimentary high-school English.

Like Alrayes, he’s also thinking about re-entering medical school in the future, but says he could also change his mind. His plan is to head back to Syria one day, but that depends on a peaceful resolution in the country, which seems a long way off at this point.

In the meantime, Jabbour says, he’s been overwhelmed with support here in Canada, especially from U of A International who are “always contacting me to make sure things are going well.”

"I've never seen a country like Canada, how they treat immigrants and especially Syrians at this time. It's really different than any other country. I would say 99 per cent of the people are friendly, open-minded, welcoming and understanding. It feels like home here, it really does."