Campus forum draws large crowds to learn about budget process and 4% reduction for 2018-19. 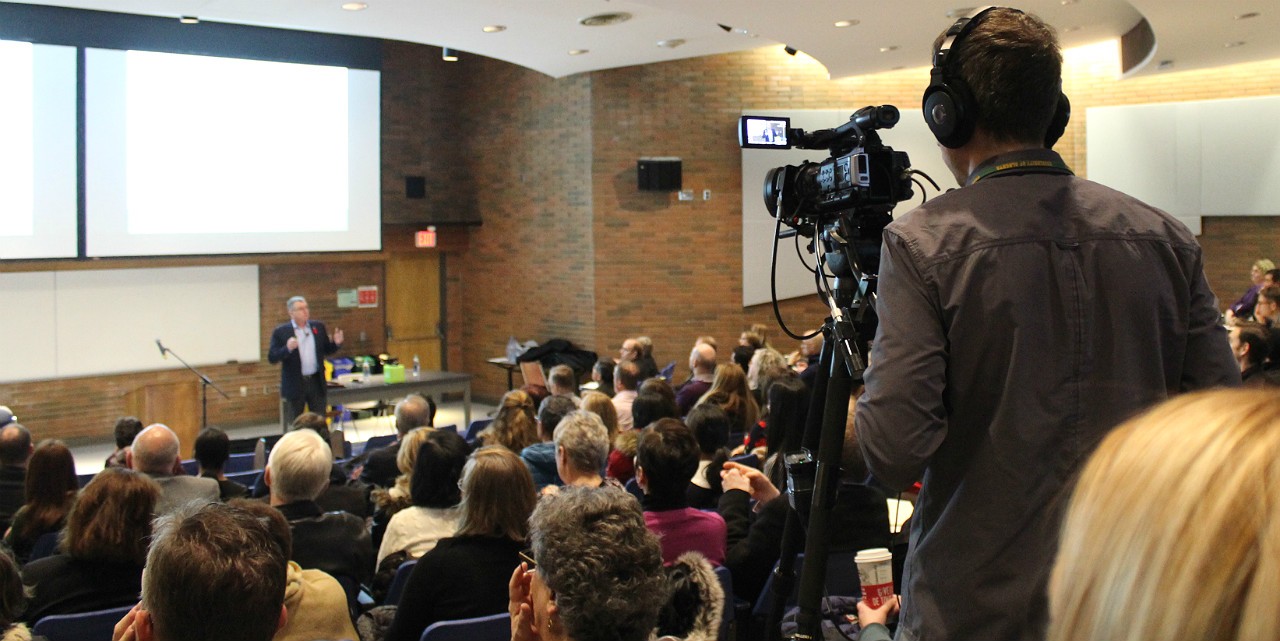 The University of Alberta has to make tough choices to eliminate its $14-million structural deficit—especially given uncertainty facing the institution and province, said president David Turpin.

“We have to get that done, especially when we look at what might be happening in the future—those storm clouds on the horizon,” Turpin said Thursday, referencing fiscal realities facing Alberta in the form of rising debt and declining resource revenues.

Turpin made the comment at a campus forum on the U of A’s budget challenges. The lunchtime session allowed students, faculty and staff to learn and ask questions about the budget process.

Last month, the university announced a budget reduction target of four per cent for all faculties and administrative units for 2018-19. Preliminary budget planning reductions of 2.5 per cent have also been projected for each of the following two years.

In his overview of the university’s fiscal challenges, Turpin said the U of A has received “wonderful support” from government for the last three years through two per cent annual increases to the Campus Alberta grant. But given the province’s bleak financial outlook, the university has to plan for an uncertain future, he said.

The provincial government has frozen tuition and mandatory instructional fees for the last three years, providing funding or tuition “backfill” for only the first two years. The university’s budget planning includes the assumptions that there will be no increase to the Campus Alberta grant and that the tuition freeze will remain for the next three years.

In addition to budget reduction targets, the university plans to implement multi-year budgeting and accountability planning. Each faculty and administrative unit are being asked to develop three-year strategic plans that outline budget, enrolment and staffing plans, along with research priorities, new programs or initiatives, space and infrastructure needs and other strategies.

When questioned about how the university will prevent short-sighted decisions like staffing cuts to generate short-term savings, Turpin said multi-year budgeting will be crucial for strategic and creative planning.

“If you’re looking at three or five years, you can go, ‘OK, here are some structural decisions we may be able to make in our unit, and this will then allow us to protect those positions or to make a better decision in terms of the life of the university’s sustainability,” he said.

When asked if the university will look at severance or retirement incentives, vice-president of finance and administration Gitta Kulczycki said it’s too early in the process to know what specific budget strategies will be used.

On the subject of vertical cuts—where a program or unit is collapsed—Turpin said that in the Canadian experience, such strategies don’t work, though differential reductions within units do. Provost and vice-president academic Steven Dew added that strategies that make sense for one part of the institution might not work elsewhere.

“We’re not expecting that we will be very prescriptive at all about how everyone has to address the challenges we have,” Dew said. “We have deans, and the deans in turn have their own executive team that really understands their areas better than we possibly could at the centre.”

One thing the university has no plans for is clawing back faculty or unit “flex” dollars—operating dollars that carry forward from year to year. Many of those dollars are already committed based on faculty strategic plans and priorities, and such a move would upset a lot of planning work that’s already been done, Kulczycki said.

“That would be a very blunt instrument—and probably not a very good one,” she said.

Provincial reviews of post-secondary funding and tuition add another layer of uncertainty to the U of A’s fiscal outlook.

“The funding review is not focused on increasing the pie. It really is looking at how the existing pie may be divided up,” Turpin said.

Compounding problems, the U of A’s costs are outpacing revenues due to a variety of factors such as the carbon levy, minimum-wage increase and increases for contractors and library acquisitions.

A structural deficit of $14 million is projected for 2017-18—a number that would be even higher without investment income. The university forecasts earning $19 million in interest on short-term investments, all of which will go to operations.

“If you’re allocating and funding base expenses with revenue that may or may not be there, you’ve got a risk,” Turpin said, adding those dollars would be better spent on strategic research and teaching initiatives or one-time expenses.