Tailored education could increase use of city’s bike lanes 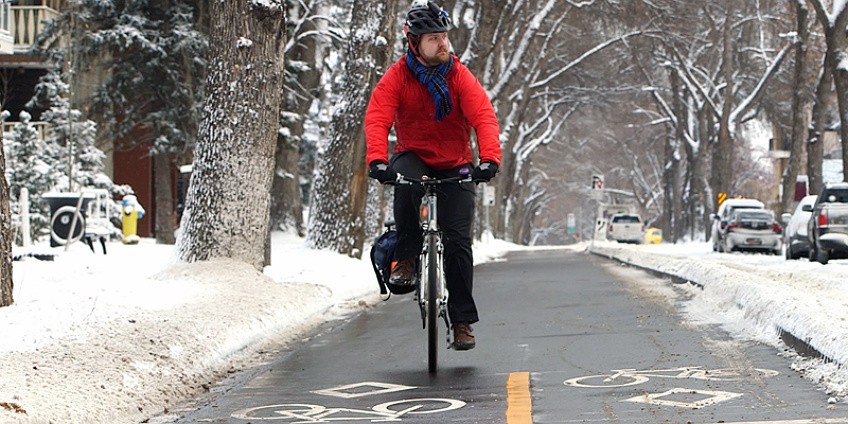 Cities with bike lanes, like Edmonton, should also invest in outreach programs that coax more cyclists to ride during the winter, says a University of Alberta researcher.

Offering tailored public programming could help boost usage for fairweather cyclists to use the roomy new bike lanes all year round, said urban planning expert Manish Shirgaokar. An assistant professor in the Faculty of Science, he conducted a study that explored how the desire to bike sways a rider’s decision to cycle depending on the weather.

“The ‘want’ to bicycle drives the usage—or lack of usage—of bike lanes,” he said. “It plays a key role in maximizing the utilization of the biking infrastructure we are putting in place, especially during our long winters.”

His findings, drawn from a review of other studies and a 2014 City of Edmonton survey, suggest that public education and season-specific training programs, particularly aimed at adults and women, have the potential to accelerate year-round bicycling. Programs could benefit people who don’t bike at all, those who bike only in the summer and low-income individuals who may feel stigmatized by using bikes to get around.

“The idea of offering education programs is to nudge all the groups forward in their riding habits,” Shirgaokar said, adding that year-round cycling is very realistic for a northern city like Edmonton. “If Scandinavian countries can do it, so can we.

“The city’s relatively flat topography makes for easy biking, and there are added benefits of sunlight and exercise—necessities during the winter—and less greenhouse gas. If we got more people walking, biking and taking transit to work, we would see a gradual drop in carbon emissions.”

The City of Edmonton and local bicycling advocacy groups offer a sprinkling of classes for adult biking, but “this research suggests a need to customize programs towards specific groups,” Shirgaokar said. And tailored programs would be a smart municipal investment in terms of getting the most out of tax-funded bike lanes, he believes.

“Connectivity between formal policy and how the city lives its life needs to happen,” he said. “City-building is not just about investing dollars in hard infrastructure, it’s also about soft programming, and you could reach a lot of people that way.”

Catering to specific demographics—like professionals who work in Edmonton’s downtown core—has the potential for programming to reach far and wide, he added.

“It could be part of their professional development. That’s a huge chunk of Edmonton.”

Similarly, studies have shown that women are more risk-averse, so a program that teaches them how to safely navigate winter roads could get them cycling year round, Shirgaokar said.

“We want to encourage more people to buy into this idea of bicycling, to create a small chain reaction.”

Tailored education could increase use of city’s bike lanes