Taking another look at tailings ponds, ducks and cannons 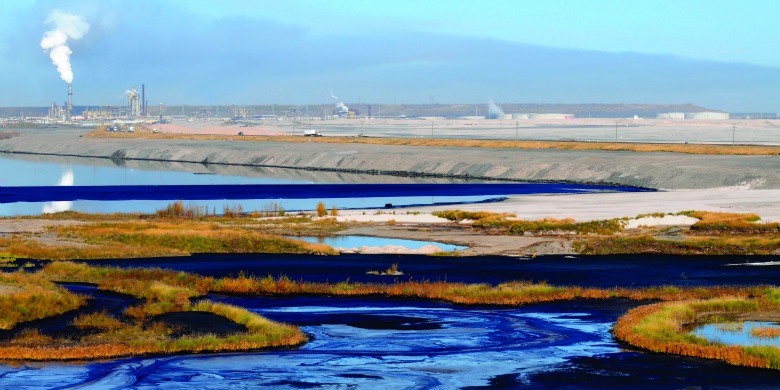 (Edmonton) A University of Alberta researcher is taking a new look at what happens when birds come into contact with oilsands tailings ponds.

Colleen St. Clair, a professor in the Department of Biological Sciences, studies human-wildlife conflicts—such as the incident that killed 1,600 ducks that landed in the Syncrude tailings ponds in 2008. The deaths led to an intense effort by the provincial government and U of A researchers to find ways to mitigate the consequences of human-wildlife interactions through the Research on Avian Protection Project (RAPP).

The project came about when St. Clair was asked to work with the courts to design a creative legal sentence, which imposed a fine that was partially allocated to creating RAPP. The ongoing research is shedding light on the interactions of birds and tailings—waste from bitumen refining composed of sand, clay, water and residual bitumen that are stored in large open-air ponds. The ponds are widely criticized as a significant environmental hazard, especially given the proximity of industrial operations to the Athabasca River, a major migratory corridor, and the risk of bitumen fouling the feathers of birds.

Over the past three years, St. Clair has identified tens of thousands of bird landings every year, but found fewer than a hundred dead birds. This interpretation is supported by experiments with captive ducks that were exposed repeatedly to tailings pond water with no measurable health effects. These findings could play an important role in redefining deterrent systems—instead of preventing birds from landing on ponds altogether, a more effective and cheaper alternative could be to reduce landings in bitumen. This can be accomplished by confining the bitumen, and distributing deterrent systems accordingly.

As deterrents go, long-range acoustical devices, or “sound cannons,” have become increasingly popular because they can be deployed automatically and emit a variety of programmed sounds. But St. Clair warns that the cure may be more harmful than the disease itself. Her research has shown that sound waves from LRADs travel into the surrounding boreal forest, potentially harming birds and other animals. As alternatives, the research team is experimenting with coloured lasers and with robots that mimic predators. They hope to identify solutions that pose less harm, while offering significant savings to industry.

In the oilsands and elsewhere, birds seem to be attracted to artificial lights, particularly on dark, overcast nights. Birds trapped by the lights at mine sites may be more likely to land in bitumen. A simple solution, employed on offshore oil platforms, is to replace conventional illumination with green lights, which are less attractive to birds.

St. Clair says her work exemplifies the role of science in informing decision-making, and her students have gone on to work in the private sector, government, environmental NGOs, academia and even ethical farming. She refers to the relationship between government, industry, and academia as a “three-legged stool,” in which each leg must fulfil its role for the system to function effectively. She believes that if these complementary roles are clearly defined and a positive relationship is maintained between the three bodies, science can play an important role in identifying actions that balance the needs of industry and the environment.

Taking another look at tailings ponds, ducks and cannons
Newsroom