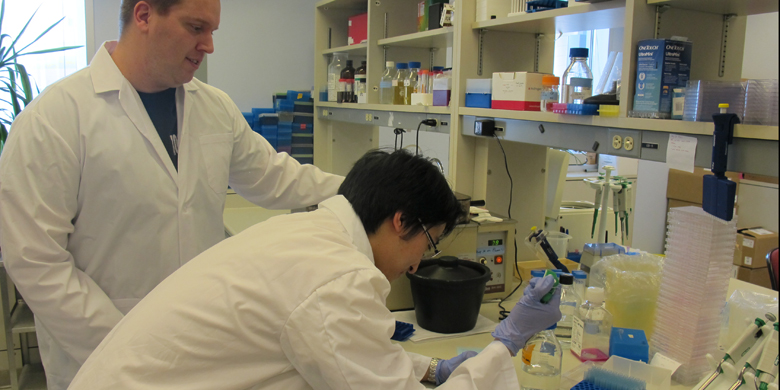 120306-troybaldwinbanner
Troy Baldwin (left) and Alex Suen have found that a regulatory molecule in T-cells might hold the key to fighting autoimmunce diseases.

Baldwin, a researcher in the Department of Medical Microbiology and Immunology, and graduate student Alex Suen looked at a specific molecule, known as BIM, which is vital in regulating T-cell death. He explained that when BIM was removed from auto-reactive T-cells, rather than being killed off and eliminated from the blood, the T-cells actually survived and were rendered inactive.

Baldwin, whose study was published in the Proceedings of the National Academy of Sciences, says his research also found there is a mechanism that controls T-cells beyond the reach of BIM. Looking specifically at the T-cells that target the pancreas, which is a cause of diabetes, Baldwin explains that the auto-reactive T-cells that survived in the absence of BIM weren’t able to kill the insulin-producing cells in the pancreas.

“Our future work is going to look at the mechanisms controlling these cells,” said Baldwin. “Even though T-cells are present in the body and should be able to target, in this case, the pancreas and cause diabetes, they don’t.”

Baldwin says understanding why these cells don’t target the pancreas and why they are inactive could lead to new therapies to control auto-reactive T-cells and help people with autoimmune diseases.

“Something is telling them not to become active,” said Baldwin. “If we can figure out what that something is we could then potentially use that information to try and either suppress cells that would normally become activated and cause autoimmunity or, vice versa, we could now take T-cells that are not active and make them more active.”

Baldwin says cancer therapies, for example, are one instance where physicians want to boost T-cell response. “If we turn that suppressive mechanism off, then perhaps we can make a cell that wouldn’t normally respond, responsive,” he says.

The next step will be to begin searching for the other mechanisms that regulate T-cells.

“First we want to try and understand if there are other cells that are controlling this auto-reactive population, or if it is something in the cells themselves that is preventing them from being active,” said Baldwin.

“If we can break those control mechanisms, then we can understand how autoimmune diseases can progress,” added Suen. “That will give us an idea of what to target to generate therapies to either try to prevent breaking that control or enforcing that control more strictly.”