Taking the next big leap 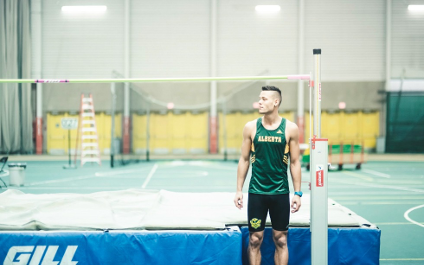 As a member of the Golden Bears track and field team, Isaac Tyler had his best high jump ever, placing third in the CanWest championships this year by clearing a bar nearly two metres high. 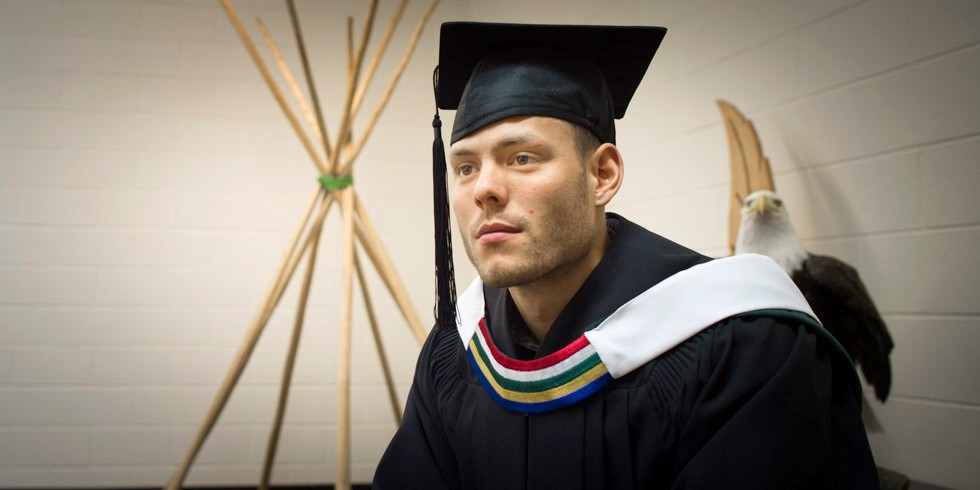 This year, Isaac Tyler had his best jump ever. A member of the University of Alberta’s varsity track and field team, he took third at the CanWest championships—a big accomplishment. Now he’s ready to take an even bigger jump into life after graduation and a new job as a curriculum support instructor with Edmonton Catholic Schools’ Aboriginal learning services.

Working with youth has been a passion of Isaac’s for several years. In 2010, he took a summer job with the City of Edmonton as a skate park host. “The job was basically just to hang out with the kids, play some cards, skateboard, hand out Band-Aids.” There, he discovered a talent for working with youth, finding it easy to connect with the kids at the park. He wondered whether it would be possible to do more, telling his boss that he wanted to find a way to continue working with youth in his community. She helped him find funding to launch a program in his neighbourhood, Evergreen, a mobile home community with a small-town feel in Edmonton’s northeast.

The community hired Isaac and another youth leader and opened the doors on a Saturday drop-in program for teens. Initially a broader youth program, it eventually evolved to support teen boys specifically as one of a number of programs provided by the Association for Evergreen Youth. With the program open every Saturday from 3–10 p.m., the teens know they can come and go as they like or stay for the whole time.

Isaac explains, “We’re trying to build responsible citizens who contribute back. So we try to teach basic life skills like cooking, even just putting on deodorant—they’re teenage boys, it’s a big thing! We just try to create a safe place for the kids to come: to come play sports, to come hang out. A lot of kids have made some of their best friends there.”

That work with youth in Evergreen led to his new role with Edmonton Catholic Schools. One of his tasks will be to help establish an after-school program for high-school boys. “The boys want to work out, they want to play basketball, so it’s almost what I’ve been doing—making a safe place for kids to come, hang out, stay out of trouble as well. Maybe somewhere safe to talk about what’s going on at home, work on extra homework, get extra help.”

Along with the after-school program, Isaac will be helping to develop content for a high-school native studies course. He’s excited to be able to put his academic knowledge to use: “I get to use all of my knowledge of history and native studies and finally put it towards something really valuable that someone else is going to learn at a younger age.”

Native studies wasn’t his original plan when he first started university. A transfer student from MacEwan with an interest in history, he was initially drawn to Middle Eastern and African studies. But when he learned about the Faculty of Native Studies, he knew he’d found his path. “I didn’t know what it would lead to when I was finished, but I knew it was going to be information I could use for a long time and something I could use to contribute back when I was done.”

“People always ask me when I say I’m in native studies, ‘Are you native?’ That’s the first or second question they ask.” His answer is yes and no. He describes his father, who moved here from Oklahoma, as Black, German and Choctaw, but he emphasizes his dad has always just said that he lives in Canada. For Isaac, Native studies isn’t about his personal identity. “I didn’t come back to school until I was 21. You kind of see what everything is like out there in the world, and then you come into university and you learn, oh, so that’s why that’s that way. It’s kind of putting all the pieces together.”

Now that he’s graduating, Isaac is hoping to connect his academic knowledge back into the world in the same way that he saw the world reflected in his undergraduate studies. But grad school isn’t far from his thoughts.

“If I could, I would do it right now. I like coming here so much. I love learning, and I love school so much. But I think this is a great way to get on the ground. It’s groundwork.” He wants to build a real-world understanding of young Indigenous people’s experiences and challenges living in Edmonton: “Ideally, I’ll learn from there, and then when I come back here, maybe I can apply that to some type of thesis or research initiative.”

Until then, he’s looking forward to having the chance to make a difference in the lives of high-school students and to keep growing his understanding of concrete issues.

“Ideally within a few years, I’ll have more of a complete picture of everything. I’m excited for that.”

Taking the next big leap
Newsroom