Taking UAlberta innovation to the bank 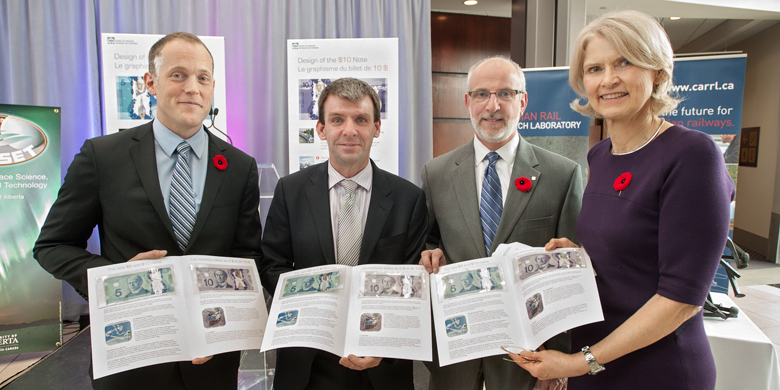 (Edmonton) It’s a long way from the last spike to the final frontier, but today, two institutions—the University of Alberta and the Bank of Canada—celebrated Canada’s technological leadership with the release of the final banknotes in the Frontiers of Innovation series.

The last two bills in the series of polymer notes—each with a distinctive back cover displaying examples of Canadian pioneer spirit—display Canadian contributions to space exploration and to the establishment and development of the Canadian railway on the $5 and $10 notes respectively.

At the unveiling today, University of Alberta researchers Ian Mann and Michael Hendry spoke of the proud technological achievements that Canada has made and continues to make on a global stage.

The university’s Canadian Rail Research Laboratory, launched last year, builds on the country’s tradition of train travel as a conduit for moving goods and people. Their research, which delves into making rail travel safer and more efficient, strives to find improvements to technology and practices that will maintain the viability of rail transportation. Hendry says that Canada’s railway system, one of the most extensive rail networks in the world, is vital to growth and prosperity—and the University of Alberta is well poised to improve the safety and efficacy of the lines.

“For Canada to continue to grow and prosper, it is critical that the railway transportation system evolve to become more innovative, more efficient and more resilient to our harsh and changing environment,” he said. “The Canadian Rail Research Laboratory and the Railway Ground Hazard Research Program are important steps towards addressing these challenges and are instrumental to Canada in becoming a global leader in railway safety.”

Beyond the Canadarm—a project helmed by a U of A alumnus—the university’s Institute for Space Science, Exploration and Technology embraces a variety of scientific and engineering disciplines related to space exploration. From providing equipment to monitor space storms to working with the Canadian Space Agency to assist in the development of software for Canada’s CASSIOPE satellite, Mann says, the University of Alberta is actively engaged in building Canada’s reputation in stellar exploration and discovery.

"Space research is at a tipping point. From servicing of the International Space Station to launch services and space tourists, space is increasingly driving private enterprise. This new aerospace industry promises huge returns, and Canada must ensure it takes advantage of this opportunity," said Mann. "Critical to this will be training of the next generation of space scientists and engineers—and the University of Alberta will be at the heart not only of providing this training for a new space industry, but also of driving miniaturization of space technology."

Phyllis Clark, the University of Alberta’s vice-president of finance and administration and a director of the Bank of Canada, said the Frontiers series is a source of pride for the bank and should be for all Canadians, as the bills mark technological achievements—in and of themselves—that all Canadians can be proud of.

“It’s a great honour to be representing the Bank of Canada at my university, the University of Alberta, as we mark the issue of Canada’s new $5 and $10 polymer banknotes—the final two notes that complete the launch of the Frontiers series,” she said. “The images on the banknotes also speak to the theme of frontiers, and that is why the University of Alberta, comprising faculty, staff and students who operate on the new frontier of innovation, is proud to host this special event today.”

Taking UAlberta innovation to the bank