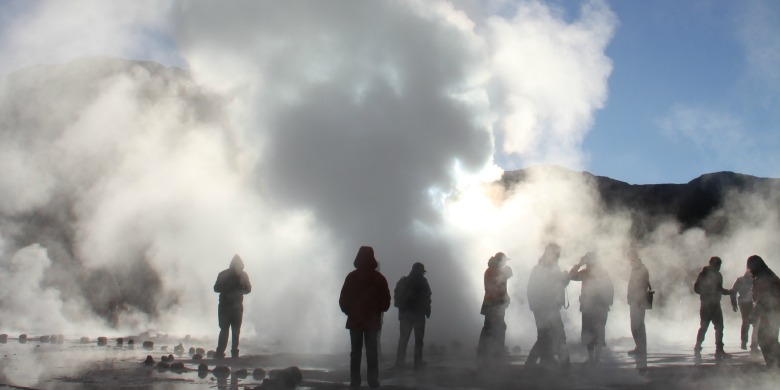 (Edmonton) Northern Alberta's oilsands region gets a lot of bad press for its high carbon emissions. A big part of that is the volume of natural gas used to heat water for bitumen processing, which accounts for about six per cent of total Canadian consumption. But what if the oilsands could be powered by green technology?

University of Alberta researchers Martyn Unsworth and Inga Moeck are exploring the potential of using geothermal energy to generate power for the oilsands region. Unsworth, jointly appointed to the departments of physics and Earth and atmospheric sciences, is an expert in natural geothermal exploration, with years of experience working with volcanoes in Latin America and around the world. Moeck’s expertise is in geothermal energy production. Together, they are working under the umbrella of the Helmholtz-Alberta Initiative—a collaboration between the U of A and the Helmholtz Association of German Research Centres, Germany’s premier scientific institute.

Moeck is splitting her time between Potsdam and Edmonton, but will be in Alberta most of the time in the coming years after receiving a new Campus Alberta Innovates Program Chair in Enhanced Geothermal Energy Systems at the U of A.

“There are lots of benefits that I bring from Germany,” she says. “Geothermal is more advanced there, and there is a lot of experience that we can input into our research here.”

So far, Unsworth and Moeck have spent three years trying to determine whether geothermal energy can benefit the oilsands, with plans for another five years of collaboration. To date, they have mapped geothermal potential in the Fort McMurray area and in the Peace River oilsands region.

Because geothermal resources (warm rock and hot water) in northern Alberta are much deeper in the Earth than in naturally volcanic regions, Unsworth and Moeck are proposing an “enhanced geothermal system,” or EGS. This technique involves fracturing the rock and pumping water through to harness the heat—demonstrating that fracking can also be used for green purposes. “Even if the heat we extract isn't sufficient for energy generation, we can still use that hot water for direct use in heating,” Unsworth points out.

So far, though, EGS has not proven to be economically viable for the oilsands, mostly because of depressed natural gas prices. “EGS is nearly economic, but not quite,” says Unsworth. “If natural gas prices rise again, or if we ever get a realistic carbon tax, geothermal energy will have an edge.”

However, there have already been a host of other benefits to the study.

“We've had so many requests from companies that want to develop and use EGS in Alberta,” says Unsworth. “They want to generate geothermal energy but they don’t have the expertise.”

“In Alberta, geothermal is really intriguing for this reason,” adds Moeck. “Energy companies use water to flush out oil, and hot water comes out of the well. This tie-in between the conventional energy industry and geothermal potential is a magic thing and is unique to Alberta.”