Teaching parents about weight while they wait 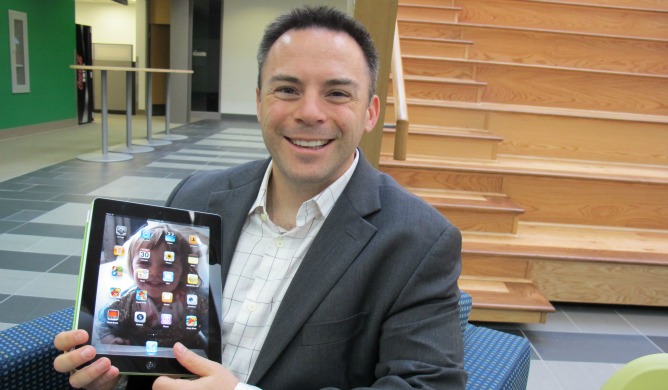 120730-geoffball01-banner
UAlberta medical researcher Geoff Ball is part of a study that will use an iPad survey to engage and educate parents about healthy lifestyles for children.

(Edmonton) Want to teach parents about healthy lifestyles for their children? There’s going to be an app for that, thanks to researchers in the Faculty of Medicine & Dentistry at the University of Alberta.

Today’s technology often gets blamed for contributing to the growing problem of childhood obesity, but these researchers are taking advantage of smart technology to see whether it can be part of the solution. They will soon launch a unique pilot study that uses iPads to engage and educate parents and families waiting in the doctor’s office.

Working with the IT company Evolution Health Systems, the researchers are specifically designing an e-survey that focuses on healthy lifestyles for children, and also provides immediate feedback and information for parents. It’s hoped this use of tablet technology will give health professionals one more tool to tackle the sensitive problem of childhood obesity.

The study will be launched at the Edmonton Oliver Primary Care Network. All parents will be asked to participate, not just those with children who are overweight. While parents are waiting for their family doctor or pediatrician to see their child, they’ll be asked whether they want to take part in the voluntary survey.

“I think getting feedback from an iPad is more objective and makes it easier for health professionals to talk about weight and health, because it moves the issue beyond just someone’s judgment,” says Geoff Ball, a researcher with the Faculty of Medicine & Dentistry in the Department of Pediatrics, and an adjunct professor with the School of Public Health and the Faculty of Agricultural, Life & Environmental Sciences.

“It’s an easier segue into the conversation, and puts the onus on parents to talk about it and identify healthy weight as a priority. We hope the feedback provides motivation for parents and gives them insight they didn’t have before.”

Colleen Enns, executive director of the Edmonton Oliver Primary Care Network, says her organization is excited to play a key role in the research.

“This innovative iPad pilot is the first of its kind in Canada, and is designed to objectively provide evidence-based health information to technologically savvy parents and their children. This information supports the extremely important wellness messages provided by family physicians and pediatricians, and reinforced by the Edmonton Oliver Primary Care Network team of dietitians, nurses, kinesiologists, psychologists and other interdisciplinary team members who work closely with patients and family physicians.”

Following planning and development with families and health professionals over the next year, Ball hopes the tablet survey will be launched next fall. His research team would like to recruit between 100 and 150 families over the duration of the study. Ultimately, he hopes the survey will engage parents who have children in the “grey zone” when it comes to healthy weight.

“The really tricky part is reaching out to kids in the grey zone—they are a bit overweight, but not severely obese,” says Ball. “We know interventions are more effective with those kids. If we can intervene earlier, before intensive and aggressive therapies are needed, that’s a better situation for everyone.”

Ball is the principal researcher in this study, which just received $440,000 in funding over three years from the Canadian Institutes of Health Research and Alberta Innovates – Health Solutions. Angela Estey, executive director of provincial chronic disease programs with Alberta Health Services, is the co-principal investigator on the initiative.

Teaching parents about weight while they wait
Newsroom