Team takes on unhealthy slums for shot at Hult Prize 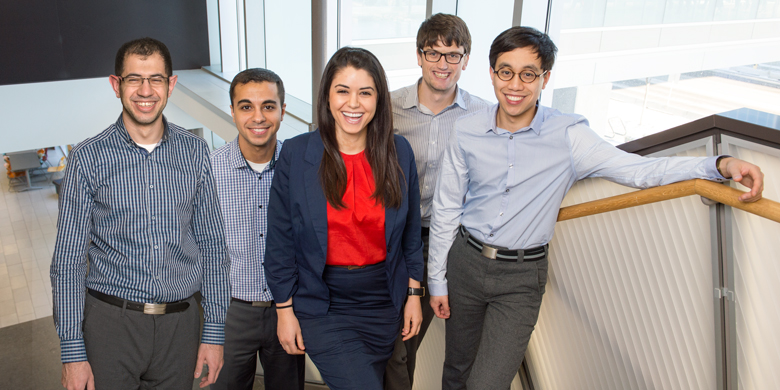 (Edmonton) A team from the University of Alberta with a mission of helping vulnerable populations through efforts like making clean drinking water a reality in Kenya now has its sights set on an even tougher task: making the world’s slums healthier.

The team of Abdullah Saleh, Abraam Isaac, Badeia Jawhari, Byron Berenger and Phil Bach—all U of A grads with the not-for-profit Innovative Canadians for Change, or ICChange—has advanced to the regional finals for the Hult Prize. Backed by the Clinton Global Initiative, the Hult Prize is a startup accelerator for social entrepreneurship, offering $1 million in seed funding and support to the winning team of post-secondary students and recent grads.

The ICChange group was one of 300 teams to advance to regionals—out of more than 10,000 applicants from around the world.

“We are a small group trying to do very large things,” said Isaac. “Just making it through to the regional finals is humongous. We already feel like we’ve won, essentially, even if we don’t move on to the finals. Just getting ICChange’s name out there, having our ideas expressed on such a large scale, will do wonders for our organization.”

ICChange has its roots at the U of A, where co-founders Saleh and Isaac met as medical students. Today, the pair and fellow Hult Prize teammates Berenger and Bach are now medical residents in the Faculty of Medicine & Dentistry, while Jawhari, who earned a BCom at the U of A, is a master’s student in health informatics.

Since its founding in 2006, their goal has been to use their entrepreneurial skills for global development projects that not only help local populations, but also can be sustained over time with the help of local partners.

Much of their efforts, like the Kenya Ceramic Project, have focused on access to clean drinking water, with the group now expanding efforts to places like southeast Asia and improving cooking stoves for Burmese refugees.

At the Hult Prize competition, ICChange will be tasked with improving the health of the world’s slum dwellers suffering from chronic diseases. The team can’t say much about their approach to the problem before the March competition, but Isaac says they’re focusing on using existing health-care networks and creating a model that can be used anywhere in the world.

At stake is a spot in the finals next fall and a chance to meet former U.S. president Bill Clinton. Isaac said the experience can only benefit the organization’s long-term growth and ability to attract not only funding partners, but talent as well. It’s a successful formula that started at the U of A, which Isaac adds has always lent support through time, dollars and mentorship—even providing access to labs to develop their ideas and technologies.

“The U of A really gave us the momentum to build our ideas, rather than kibosh a bunch of students who were trying to do something new.”

Team takes on unhealthy slums for shot at Hult Prize