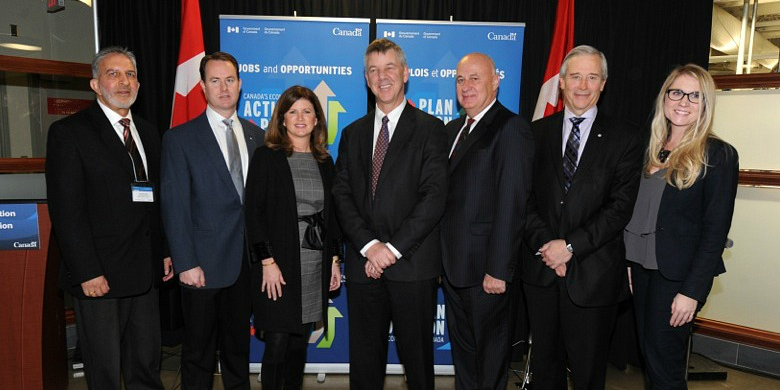 (Edmonton) Two major technology accelerators that will influence Alberta’s economic future have been given the go-ahead with $6 million in federal funding.

The Canada Accelerator and Incubator Program, part of the Government of Canada's Venture Capital Action Plan, is allocating the funding over five years for TEC Edmonton to set up and run the TEC Health Accelerator and for Innovate Calgary to do the same with its Kinetica Ventures.

Hon. Rona Ambrose, minister of health, was at the TEC Centre in the University of Alberta's Enterprise Square campus Nov. 21 to announce the funding. The small- to medium-sized, technology-driven enterprises that will be helped, Ambrose said, are "the beating heart of the Canadian economy: 98 per cent of our businesses are SMEs, and nine of 10 jobs in this country are created by SMEs."

The TEC Health Accelerator will assist promising startup health-care companies throughout Alberta to grow. Kinetica Ventures will work with new companies with technologies applicable to the provincial energy sector.

The Government of Canada turned to the country's leading business incubators for proposals to put the $100 million allocated to the Canadian Accelerator and Incubator Program to work.

A joint proposal was submitted by TEC Edmonton and Innovate Calgary through the U of A, to build on the strengths of each region and agency.

TEC Edmonton, a joint venture of the U of A and the City of Edmonton, has expertise in building health-care companies because of health research commercialization at the university. Innovate Calgary is experienced working with energy-based new technology companies. Both organizations are not-for-profit, and the funding will be split between the two partners.

City councillor Michael Oshry announced further funding would be coming from the City of Edmonton, through the Edmonton Economic Development Corporation, to ensure the success of the TEC Health Accelerator.

"Health care is one of the last sectors not being completely disrupted by technology," remarked Brad Ferguson, CEO of Edmonton Economic Development. "We all know it is coming, and it's exciting, through the TEC Health Accelerator, to be a part of it."

TEC Edmonton CEO Chris Lumb reviewed the ongoing collaboration between the two city-based business incubators, leading to the joint funding proposal. Each has "deep expertise in specific sectors," Lumb noted. “The partnership will bring that specific expertise to startup companies throughout the province."

Both Lumb and Innovate Calgary's Henry Kutarna are confident this seed capital will produce excellent results down the road.

The funding, Kutarna said, will be the "a spark to ignite" the growth of new, world-leading energy technology companies from Alberta.

In the health-care industrial sector, Lumb predicted that in 10 years’ time, Alberta should be a leading region in the world for health-care companies.