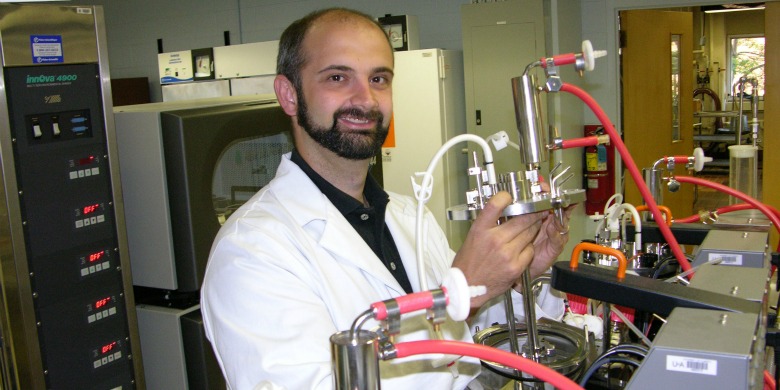 120504-davidbressler-banner
U of A researcher David Bressler has developed leading-edge technology to convert agricultural waste into useful products.

(Edmonton) Technology developed by University of Alberta researcher David Bressler to convert agricultural waste into useful products is getting a boost from the federal government.

Western Economic Diversification Canada announced a $970,000 investment May 4, towards establishing a pilot industrial plant at the U of A’s Agri-Food Discovery Place. Once it is refined and tested, the technology could lead to the establishment of an Alberta-based industrial plant and U of A spinoff company.

A grant from the Alberta Livestock and Meat Agency is also helping to support the initiative.

The leading-edge research, called Lipid to Hydrocarbon technology, was developed over the past several years by Bressler, an associate professor in the Faculty of Agricultural, Life and Environmental Sciences, and his team. The technology can convert waste like animal fats—such as tallow from the beef industry—as well as vegetable oils, oil from plant algae and restaurant grease, to high-value byproducts such as hydrocarbon fuels, solvents and chemicals.

These end products take the form of jet fuel, gasoline and solvents for use in the crop, oil and gas industries. As well, one of the solvents developed in Bressler’s lab would be the first of its kind used in the cosmetics industry. A spinoff company would produce and supply these products to various industries for commercial applications.

The project has taken biodiesel to the next level, Bressler said.

“This research is a great example of technology that was developed from scratch at the U of A and, if successful, has a chance to make biodiesel obsolete.”

Bressler’s patented conversion process results in fuels that are more environmentally friendly because they perform better, burn more cleanly and have lower emissions.

Partnerships with agencies such as Western Economic Diversification Canada have been crucial in getting the technology to its current successful state, Bressler noted.

“It’s been a long road, and we’ve been supported all the way by industry and funding agencies, including Western Economic Diversification Canada, the Alberta Livestock and Meat Agency, Natural Sciences and Engineering Research Council of Canada, Alberta Agriculture and Rural Development, Alberta Innovates Bio Solutions and the Alberta Agricultural Research Institute.”

Besides producing exciting new technology and economic opportunities, the research project also benefited budding U of A scientists, said Bressler, noting that several graduate students, a post-doctoral student and a research associate were all trained through the ongoing work. Several scientific papers were also published along the way.

Bressler is pleased to see U of A research like his breaking barriers and moving into the marketplace. “We want to take the discovery process as far as it can go.”