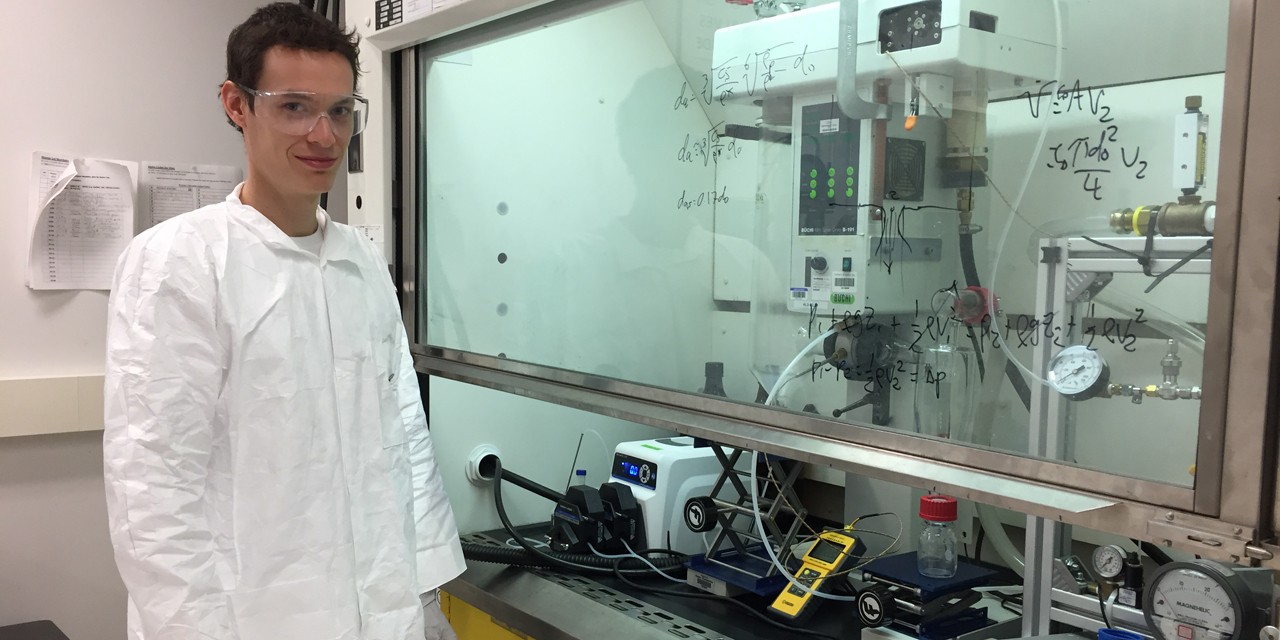 PhD student Nicholas Carrigy is part of the engineering team that was tapped to develop a powder that employs a virus to kill harmful bacteria found on food found primarily in Kenya.

The UAlberta engineering team that demonstrated the formula for killing bacteria by unleashing a virus that can be manufactured in a powder has been asked to turn that technology on a food-borne bacteria that kills scores of Kenyans every year.

Mechanical engineering professor Reinhard Vehring recently secured funding to help develop a new bacteriophage product to combat Campylobacter jejuni, a bacterium prevalent in Kenya that kills nearly nine per cent of people it infects, most of them children.

A bacteriophage is a virus that attacks a bacterium by injecting it with viral DNA. The virus replicates inside the bacterium, which bursts, releasing more viruses that attack more bacteria. Because antibiotics aren’t used, bacteriophages are seen as an emerging tool that has the potential to address the rise of antibiotic resistance and a therapy against multi-drug-resistant strains of a number of bacteria.

For this project, the team envisions dry powder bacteriophage products that can be applied to foods, like poultry, to decrease the bacterial load on the food before it is delivered to consumers.

“Our goal is to see that it can be inexpensively produced on a large scale and that it has long-term stability at temperatures encountered in Kenya,” said PhD student Nicholas Carrigy, who added that when stabilized in a dry powder, the bacteriophage won’t require refrigeration and will tolerate high temperatures, which is important for its success in the east African country.

The team is working with the University of Nottingham in the U.K. and the Kenya Medical Research Institute. Ultimately, the goal is to begin manufacturing the powder in Kenya starting in 2019 using the technology Vehring and his team develop. Meanwhile, collaborators in Kenya are busy laying the groundwork for its introduction.

“Our collaborators, linked with us through the non-profit organization Phages for Global Health, are engaging with policymakers, consumers and processors in Kenya,” said Carrigy. “We need to ensure that the product gets to market, is accepted by the local culture, and can be manufactured locally.”

He added he was excited about the humanitarian and engineering aspects of the projects.

“It has the potential to save lives.”

The project is funded by the Biotechnology and Biological Sciences Research Council situated in the United Kingdom.