Telling changes on the tundra 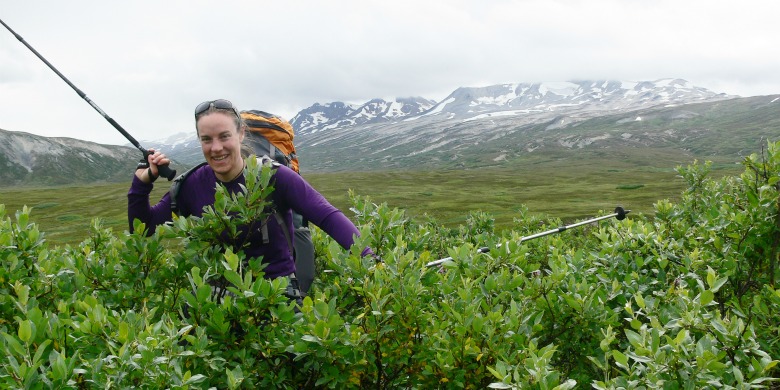 120411-islainshrub-banner
Researcher Isla Myers-Smith studied shrub growth on Herschel Island off the coast of the Yukon.

(Edmonton) University of Alberta researchers are part of a groundbreaking, multinational study of the effect of global warming on tundra vegetation in various regions around the world.

U of A biologist David Hik says the work, by a total of 47 contributors and published in the journal Nature Climate Change, is very timely.

“In just the last three decades summer temperatures in the Yukon are about 1.5 degrees warmer. In winter the temperature differences are even larger, around six or seven degrees above the mean,” said Hik. “These temperature changes affect plant life and will eventually affect everything else.”

Isla Myers-Smith, who did her PhD research at the U of A, studied shrub growth on Herschel Island off the coast of the Yukon and documented the dramatic growth rate of normally low-lying shrubs. “Shrubs have responded much more quickly to global warming than northern trees,” said Myers-Smith. “Between 1999 and 2009, one species of shrub in our study plot doubled in height, going from four to eight centimetres high.”

Myers-Smith explains that most tundra shrub species that currently hug the ground along the Arctic coastline of Canada have seen increased growth over the last decade. She says that changes in the size of shrubs are relatively small when measured over just a few years, but when forecast over decades or centuries, could result in a very different tundra landscape in the North of Canada 100 years from now.

The researchers say this increase in shrubs is an example of the problems a global warming growth spurt could cause for tundra ecosystems. “Taller shrubs can shade out surrounding plants and cool off the soil in summer, and they can trap snow in winter, keeping soils warm. Also, by changing soil temperatures, they can alter the tundra nutrient balance,” said Myers-Smith.

“The accelerated growth of the Herschel Island shrubs could also affect small mammals,” adds Hik. “Predators like foxes and snowy owls will go undetected, which will affect the population balance of predators and prey in these sensitive ecosystems.”

The U of A researchers say their research was made possible by the long-term study plots that have been established by university and government researchers across Canada’s North. “Other vegetation studies in remote areas have to use remote sensing data from satellites and aerial photography,” said Myers-Smith. “But we’ve been able to get out on the ground and measure the plants for a few decades now, and that means we can put together a more accurate picture of how the tundra is changing.”

Interest worldwide in the reaction of tundra shrubs to warming has prompted Myers-Smith to use social media to spread the word about shrub research and encourage researchers to share data. “I created a website called The Shrub Hub and so far our research network includes 40 different research sites and almost 100 researchers worldwide.”

Myers-Smith adds that the massive collaboration required for the tundra vegetation project points to some weaknesses in obtaining a complete picture of the problem. “Looking at a map of where the research came from, there are gaps such as in the Russian Arctic and even in some areas of the Canadian tundra,” said Myers-Smith. “We’re hoping that funding agencies will see what our collaboration has accomplished and will help to fund future efforts so that vegetation monitoring can cover all tundra regions around the world.”

Telling changes on the tundra
Newsroom