U of A tennis team comes up aces to claim its first ever national championship title. 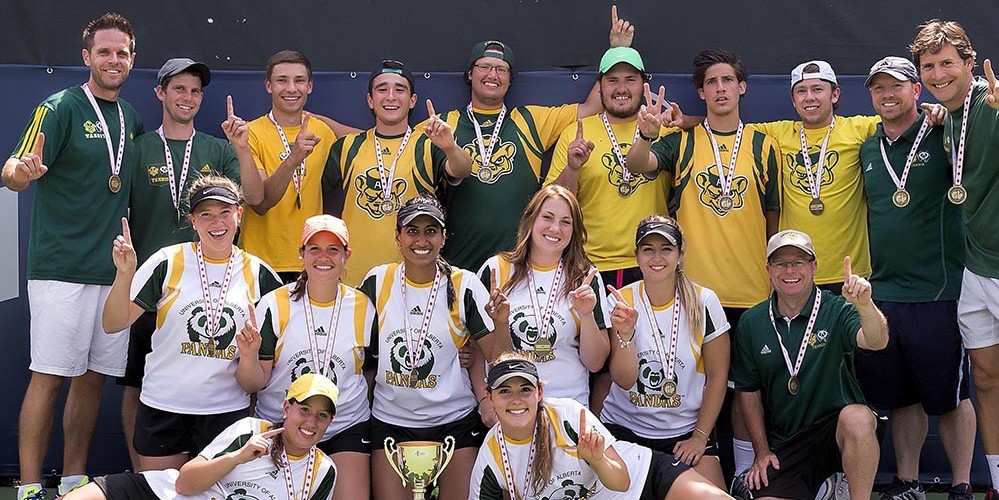 The University of Alberta Golden Bears and Pandas tennis program made team and Canadian university tennis history Aug. 10 when it claimed its first national championship title.

It is the first national championship title in the history of Golden Bears and Pandas tennis. In the six years of the current championship format, which occurs at the same time at the Coupe Rogers/Rogers Cup, the U of A has recorded four medal performances, including three consecutive silver medals (in 2011, 2012 and 2013). Prior to that, the Evergreen and Gold tennis program competed in the NAIA and against predominantly American programs at championship tournaments held in various places in the United States.

"I am so very proud of the team," said head coach Russ Sluchinski. "We have been so close for so many years, and to finally win means so much to student-athletes and coaches in the tennis program."

The Canadian championship tournament is a co-ed format that sees singles and doubles play rolled into one overall team score for the school. All of the competing teams play a mixture of singles matches (three men and three women) and doubles matches (two men, two women and one mixed) for an overall match score.

The Bears and Pandas combined to win both of their matches in Montreal, including a 6–5 win over McGill on Aug. 8 that represented the program’s first-ever win over a team from Quebec, the province that has produced five of the last six national championship teams. After losing to Alberta on Friday, McGill defeated Western Ontario to set up a rematch of the 2013 championship against Alberta. Prior to Alberta winning this year, and McGill winning last year, the University of Montreal had won four straight national championship titles from 2009 to 2012, making the U of A the first team from outside Quebec to win the title.

Although the U of A tennis program can trace its roots back to 1913, the modern history began in 1999 when Golden Bears and Pandas tennis was officially made a varsity sport at the university. Sluchinski, a graduate of the U of A who is originally from Drayton Valley, Alberta, has been coaching the program since 1995, when it was a club team. The program joined the NAIA in 1999, the same year tennis became an official varsity sport at the U of A, and now consists of two head coaches—Corey Stewart coaches the Bears and Sluchinski coaches the Pandas—as well as 15 student-athletes and a full youth tennis development program located at the Saville Community Sports Centre.