To our knowledge, we are the only toxicology researchers with access to examine these fluids as they are actually produced in the well.

Assessing the impact of hydraulic fracturing on aquatic animals. 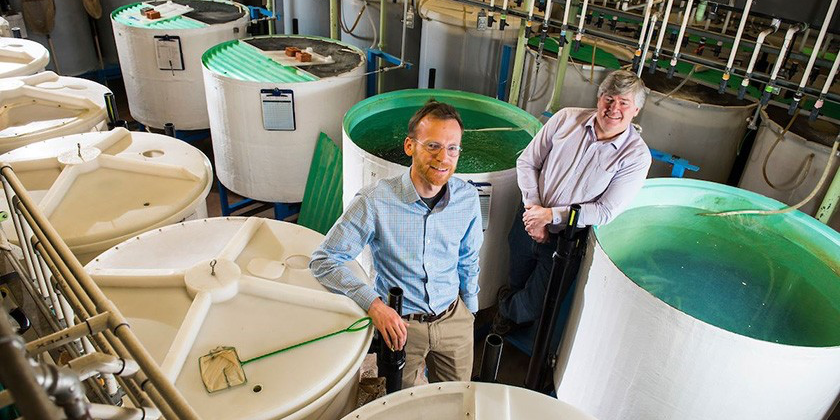 Dan Alessi and Greg Goss are studying the effects of hydraulic fracturing fluids on aquatic animals.

Researchers at the University of Alberta have conducted the first-ever study to use hydraulic fracturing fluids to examine effects on aquatic animals, such as rainbow trout.

Horizontal drilling with high-volume hydraulic fracturing is a practice used globally for extracting oil and gas from tight reservoirs. Hydraulic fracturing uses large quantities of water and poses many environmental hazards in water, from contamination to spills.

A recent study examines the impact of the fluids produced by hydraulic fracturing on freshwater rainbow trout. Conducted in collaboration with industry partner Encana, the study was led by Daniel Alessi and Greg Goss in the Faculty of Science and Jon Martin in the Faculty of Medicine and Dentistry.

“The end goal is to understand the effects of the spills, should they occur, on native aquatic animals,” explains Greg Goss, professor in the the Department of Biological Sciences. “This will help in both environmental policy, water treatment options for onsite water management and improved mitigation policy and programs.”

This is the first-ever study to use fluids actually produced by hydraulic fracturing to examine their impact on aquatic animals. Comparable to many other species in northern countries, rainbow trout are a freshwater fish with cultural and economic implications, making them the ideal subject to study.

“To our knowledge, we are the only toxicology researchers with access to examine these fluids as they are actually produced in the well,” says Daniel Alessi, assistant professor in the Department of Earth and Atmospheric Sciences. “We are fortunate enough to have a company such as Encana provide us the fluids to perform this study as a means to improve their environmental stewardship.”

In their study, they found that fluids produced by hydraulic fracturing have significant negative effects on rainbow trout, even at greater than 100 fold dilutions and these effects include oxidative stress, endocrine disruption, and biotransformation which may lead to longer term impacts on populations where spills have occurred.

The results provide a basis for both regulators and industry to develop policies and procedures that will help reduce the negative effects of spills, as well as ensure that the clean up of the zone of impact is done appropriately.

The team of researchers plan to conduct long-term studies to examine the potential effects of these hydraulic fracturing, fluids being present in a stream, mimicking the actual values present after a spill.

“We are only just starting to examine these effects and examine some of the other characteristics of spills,” says Goss. “From here, we hope to inform industry, government and the public alike about the potential impacts of hydraulic fracturing, on our water and the animals who live there.”

The paper, “Effects on Biotransformation, Oxidative Stress, and Endocrine Disruption in Rainbow Trout (Oncorhynchus mykiss) Exposed to Hydraulic Fracturing Flowback and Produced Water”, was published in Environmental Science and Technology.