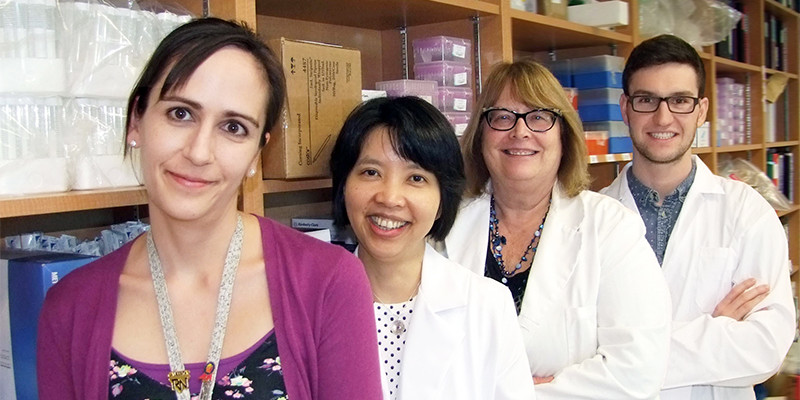 The complete team that performed the clinical study. From left to right: Brandi Roach (nurse), Dina Kao, Karen Madsen and Braden Millan (graduate student and first author of the paper).

Clostridium difficile is a very common type of infection to which all of us are potentially exposed. However, some people find it harder to heal and traditional antibiotic treatments do not seem to have good results for everybody. A new study published in journal Clinical Infectious Diseases, led by Karen Madsen and Dina Kao from the Faculty of Medicine & Dentistry’s Division of Gastroenterology, sheds some light on the benefits of fecal microbial transplants as a prospective way to overcome this recurrent health problem.

Their clinical study confirmed that patients with recurrent Clostridium difficile infection (RCDI) tend to harbor larger numbers of antibiotic-resistant microbes, which makes it harder to find an adequate treatment that can actually bring them back to health. Antibiotics, in fact, play a big role in the growth of the infection in the first place.

“A lot of people get Clostridium difficile infection in the hospital,” explains Madsen. “The treatment with antibiotics wipes out the regular bacteria and allows for the growth of the pathogen – the patient then gets a recurrent colitis, so the problem is that antibiotics caused it, and then they are treated with more antibiotics. It’s a vicious circle.”

Conventional treatment eliminates the healthy organisms in the patient’s gut that usually keep the infection under control, leaving not only Clostridium difficile to proliferate, but also allowing for other bacteria with antibiotic-resistant genes to spread the infection.

“We all have a small number of bacteria with antibiotic-resistant genes, but there are certain bacteria that are resistant to all known antibiotics so you can’t treat these patients with anything,” adds Madsen. “There are hundreds of these genes and they are present in different types of bacteria, which ‘swap around’ genes with other bacteria, passing the antibiotic-resistant ones along. The more you give antibiotics to patients, the more likely it is for them to become colonized with bacteria that have more resistant genes.”

Through this process, patients with RCDI may ultimately get colonized with bacteria that cannot be eliminated with any type of antibiotics. Thanks to Kao and Madsen’s team, fecal microbial transplantation has now been demonstrated as a viable solution with long-term results.

Dina Kao and Karen Madsen started the fecal microbial transplant program in Alberta in 2012 and have treated over 200 patients. “We started treating patients and had a success rate of about 90 per cent,” says Madsen. “The results were sustained, patients were completely cured in 48 hours.”

After performing a transplant of fecal matter from healthy donors into those affected with RCDI, the results were very promising. Not only were patients quickly healed from their chronic infection, but further monitoring confirmed the positive outcome was maintained after more than one year. While fecal microbial transplants were known to be helpful in treating Clostridium difficile colitis, this study examining the presence of antibiotic-resistance genes in these patients provided proof of principle to show the treatment successfully eradicated the antibiotic-resistant bacteria that makes it so hard for RCDI patients to heal.

The next step for Kao and Madsen will be to work with infectious disease doctors at the University of Alberta and try this approach in patients who are already colonized with antibiotic-resistant bacteria, to confirm the effectiveness of the transplants in such advanced cases.

Although it may sound strange for some, fecal microbial transplants are not completely new. According to Madsen, this technique was first utilized centuries ago but did not have follow-up in human health, being mostly used on cattle. The technique re-gained interest in the past few years for its potential benefits for humans; in Canada, just a few facilities are performing the procedure. Only the U of A has focused on antibiotic-resistant genes.

These initiatives have received funding from Alberta Innovates – Health Solutions (AIHS) to develop new ways to perform the transplant. Kao and Madsen are currently carrying out a clinical trial comparing the effectiveness of an oral Fecal Microbial Transplantation alternative—pills—with traditional colonoscopy and, most recently, a country-wide grant of $12 million was awarded by the Canadian Institutes of Health Research (CIHR) to further study the vast role gut microbes have in overall health, the advantages of fecal microbial transplants and how it all affects mental state and brain function in patients. Alberta and Ontario facilities will receive part of this grant to continue their research into fecal transplants.

Karen Madsen, a member of the Faculty of Medicine & Dentistry since 2008, has focused her research on the role microbes have in the gastrointestinal tract, and how to manipulate them to control how they affect human health and disease. She plans to continue innovating with new techniques to alter the gut microbiome, in order to understand how specific microbes—or the lack of them and their metabolic products—may be causing distinctive health issues. Madsen also aims to personalize treatment for patients through a combination of diet and medications.  She definitely predicts a large amount of exciting breakthroughs will be coming out of this area of research in the near future.