The dawning of the Higgs era 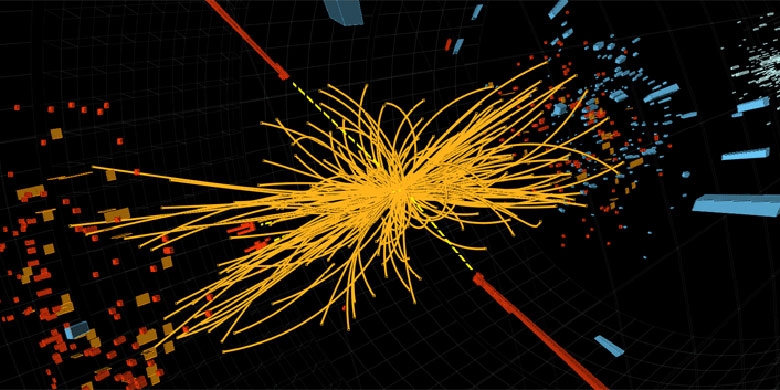 Two experiments at the Large Hadron Collider at CERN in Geneva, Switzerland, have revealed a new subatomic particle that could be the long-sought Higgs boson.

A University of Alberta researcher who helped design and build equipment used in the experiment is cautious about the results but bullish on the future of particle physics research.

"We can say we are entering the Higgs era of the LHC, says James Pinfold, a professor of physics who says the chances that the finding is a blip in the system is about 1 in 1.7 million. "If this new particle is not a Higgs boson, it would herald revolutionary new physics, beyond the Standard Model. We are in that best of all situations—a win-win situation."

The Higgs boson is a theoretical particle that is not made up of smaller particles, thus making it one of the building blocks of the universe.

Pinfold is one of two professors in the U of A’s Department of Physics who has been with the ATLAS experiment since its inception. Along with Doug Gingrich, Pinfold brought construction of parts of ATLAS to the University of Alberta. Associate professor Roger Moore joined the effort when he arrived at the university in 2003.

With assistance from physics researchers, graduate students, technicians and support staff, the group took key roles in the development, design, construction and installation of equipment for ATLAS. The main contributions include:

• designing, testing and overseeing the fabrication of all the digital electronics for the calorimeter, which measures the energy of particles

• designing and building a trigger mechanism that identifies interesting physics, like a Higgs boson decay, and takes a picture of it

• designing, building and installing a subdetector called LUCID, built largely at the University of Alberta, that provides crucial information for calculating the number, frequency and pattern of particle collision events in the ATLAS detector.

Jonathan Schaeffer, dean of the Faculty of Science, saw U of A researchers’ work first hand when he visited CERN last year. "My most profound realization of visiting CERN is the vision of people like Jim Pinfold, who over 20 years ago, decided to work in a team, all in the spirit of science," Schaeffer said.

Indeed, members the particle physics group have spent countless hours working on design, construction and data analysis on the U of A  campus. In addition, professors, researchers, students and technicians have made dozens of trips to CERN to install equipment, run beam tests and take results directly from the ATLAS detector.

The next step will be to determine the precise nature of the particle and its significance for our understanding of the universe. One of the biggest questions is the nature of dark matter, a substance thought to make up over 80% of the mass in the universe but which we don’t know much about.

U of A researchers are already taking the lead in dark matter research. The work being done by Aksel Hallin, Carsten Krauss and Darren Grant is going into detectors at the Sudbury Neutrino Observatory and the IceCube neutrino observatory at the South Pole.

"This initiative in astroparticle physics is vitally important if we are to understand the full implications of the discovery we are celebrating today," said Pinfold

Today’s results are preliminary. They are based on data collected in 2011 and 2012, with the 2012 data still under analysis. Publication of the analyses shown today is expected around the end of July. A more complete picture of today's observations will emerge later this year after the LHC provides the experiments with more data.

However, the magnitude of today’s announcement is immense, especially for those who have seen the vision through.

"This is a moment particle physics has been waiting for," says Gingrich. "It renews the dream many of us first had 20 years ago when we set out to discover the Higgs boson. The page turns, as we now proceed to study the properties of this new particle and determine its true identity."

The dawning of the Higgs era
Newsroom