The days are getting longer

Scientists reveal that the rotation of Earth's core holds a clue to understanding global sea-level rise. 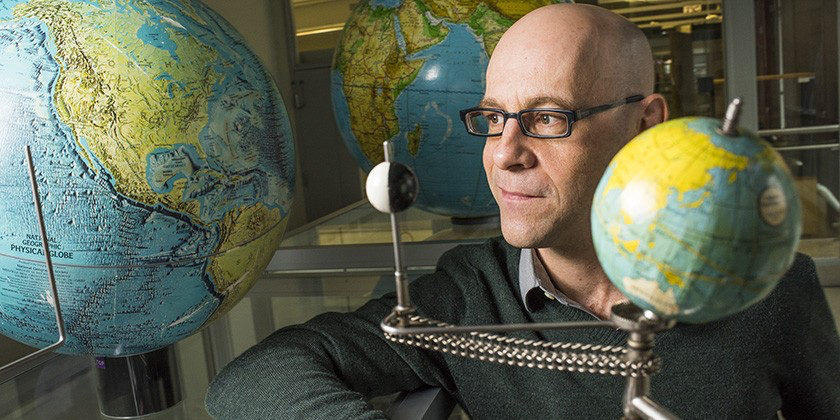 The days are getting longer

Scientists are studying past changes in sea level to make accurate future predictions of this consequence of climate change, and they’re looking down to Earth’s core to do so.

“In order to fully understand the sea-level change that has occurred in the past century, we need to understand the dynamics of the flow in Earth’s core,” says Mathieu Dumberry, a professor in the Department of Physics at the University of Alberta.

The connection is through the change in the speed of Earth’s rotation. Meltwater from glaciers not only causes sea levels to rise, but also shifts mass from the pole to the equator, which slows down the rotation. (Picture the Earth as a spinning figure skater. The skater moves his or her arms in to spin more quickly or out to slow down.) The gravity pull from the Moon also contributes to the slowdown, acting a little like a lever brake. However, says Dumberry, the combination of these effects is not enough to explain the observations of the slowing down of Earth’s rotation: a contribution from Earth’s core must be added.

One of only a few people in the world investigating changes in Earth's rotation, Dumberry contributed his expertise on Earth’s core–mantle coupling to the study.

“Over the past 3,000 years, the core of the Earth has been speeding up a little, and the mantle-crust on which we stand is slowing down.” As a consequence of Earth rotating more slowly, the length of our days is slowly increasing. In fact, a century from now, the length of a day will have increased by 1.7 milliseconds. This may not seem like much, but Dumberry notes that this is a cumulative effect that adds up over time.

Based on their work reconciling these discrepancies, the scientists involved in the study are confident in predicting sea levels to the end of the 21st century. “This can help to better prepare coastal towns, for example, to cope with climate change,” says Dumberry. “We’re talking billions of dollars of infrastructure here.” Dumberry notes that this study serves as a stimulus for more work to continue investigating the deep interior of our planet.

The findings, “Reconciling past changes in Earth’s rotation with 20th century global sea-level rise: Resolving Munk’s enigma,” were published in the Dec. 11 issue of the journal Science Advances.

The days are getting longer
Newsroom