The education of a minister 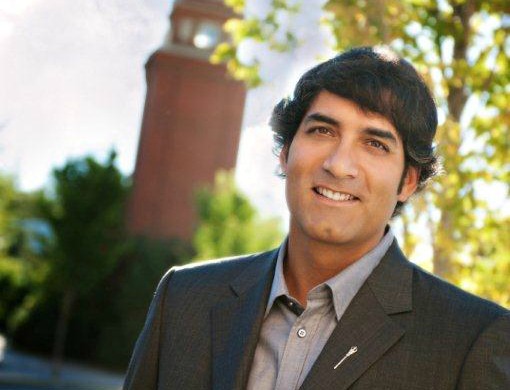 121026-stephenkhan-banner
UAlberta alumnus Stephen Khan was appointed as Minister of Enterprise and Advanced Education in April 2012.

(Edmonton) In his life’s journey from student to businessman to one of the province’s top politicians, Stephen Khan is happy to say the University of Alberta has flavoured his experiences along the way.

Newly elected this past spring as MLA for St. Albert and then appointed as Minister of Enterprise and Advanced Education by Premier Alison Redford, Khan still has some green and gold in his blood, 24 years after graduating.

His time at the U of A still triggers happy memories.

“Whenever we go by the campus, I always get a little sentimental about what a wonderful place it is, about what a special place it is. It brings back so many rich memories,” said Khan, reflecting on his years on campus. “I had a wonderful personal, social and educational experience at the U of A.”

While at the U of A, he played for three years on the Golden Bears volleyball team, courted the girl who would become his wife and forged lifelong friendships with “people who still play a prominent role in my life.

“The University of Alberta is a special place—and I’m not alone in those thoughts. In our house when you were growing up, you went to elementary, junior high, high school and then to the U of A. The U of A has always been there, a part of our family’s life.”

Khan’s father, mother and sister all hold U of A degrees, and even as a youth, Khan was immersed in what would become his alma mater, tagging along with his mother while she took evening classes—one by one, over a decade—to earn her education degree. “I got a taste of what university was like.”

Khan’s turn at the U of A came when he pursued a bachelor of arts after graduating from Paul Kane High School in St. Albert. An introductory class in anthropology taught by professor Owen Beattie captured the young man’s imagination and set Khan on a path that resulted in an anthropology degree in 1988.

“He was a marvellous teacher and I tried to take as many classes as I could from him,” Khan recalls.

Beattie, now retired, was deeply involved at the time with his world-renowned exploration of the lost Franklin Arctic expedition, and wasn’t teaching many classes, but Khan flourished in his education all the same, savouring the journey as much as the destination.

“That’s what the university experience is about; you get there and try to find your way and try to discover what interests you.”

For Khan, the field of anthropology and its focus on differing cultures and beliefs opened his mind to the useful concept of critical thinking.

“Anthropology is a holistic study, and what compelled me was being taught to put your personal bias and societal opinions aside and approach a task as objectively as you can. It’s that level of objectivity and analysis that was such a good thing for me.”

Khan carried those skills forward into life after graduation, dabbling in Alberta’s film industry before settling into the business world where, for 20 years, he owned and operated his family’s software development company. Each step of the way was guided by what he learned through his arts education at the U of A.

“It is such a well-rounded degree. You know how to write, how to communicate, how to listen, all of those different elements that helped me achieve some success in the business world.”

Those skills also aid in his duties as minister of one of Alberta’s key portfolios.

“Every day in this line of work you are listening and striving to bring a certain level of objectivity to issues and challenges you face. You develop a level of analytical thought.”

Moving forward in his new role, Khan says the ministry is collaborating with the province’s post-secondary institutions, including the U of A, to “fashion a vision” for educational excellence.

“We’re excited about what we are going to do in the future to make Alberta the best place in the world to get a post-secondary education.”

The education of a minister