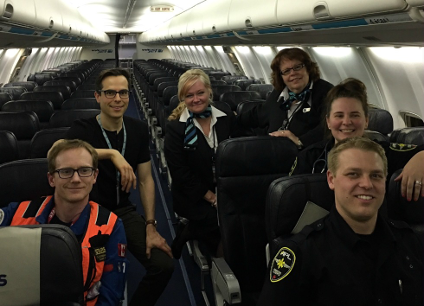 The evacuation flight team (from left): Domhnall O'Dochartaigh and Kevin Lobay with STARS, Janie Adam and Robin Feldberg with WestJet, and Chantel Rosenthal and Matt Lazarowich with APL

Emergency physician Kevin Lobay had been on plenty of medical transfer flights, but helping fly 100 hospital patients out of the Fort McMurray fire zone was beyond anything he’d ever faced. 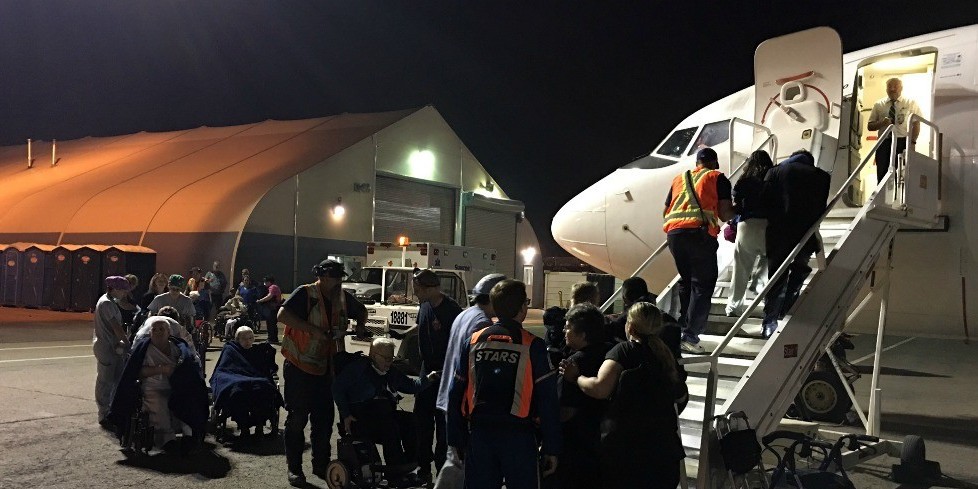 On May 3, 2016, as the citizens of Fort McMurray fled the devastating wildfire that threatened their entire community, the Northern Lights Regional Health Centre was evacuated. After the centre’s staff got their patients out of the hospital and to the airstrip at the Suncor Firebag Aerodrome, the next step was to get the patients to safety. Assistant clinical professor Kevin Lobay with the University of Alberta's Department of Emergency Medicine explains what happened next.

Urgent medical transfer flights happen on an ongoing basis across Alberta. Teams of skilled professionals—including STARS nurse-paramedic teams, air ambulance providers, ground EMS paramedics, and emergency medicine physicians—all play a part in getting people to the care they need. But last week’s fire in the Fort McMurray and Wood Buffalo region was a challenge on a scale the system had never yet faced.

A member of Alberta’s celebrated STARS Air Ambulance team, emergency physician Kevin Lobay has been through more than a few flights helping patients in need. But he had never before been involved in a disaster evacuation, let alone one on the scale of the wildfire that saw more than 80,000 people evacuated, including the regional hospital staff.

When the call came, Lobay joined his STARS colleagues, a team from Advanced Paramedic Ltd. (APL) and WestJet. Along with the usual air ambulance medevac planes, they would use a commercial Boeing 737 to assist in the transfer of more than 100 patients out of the fire zone and safely to hospitals in Edmonton.

When the evac team landed on the tarmac at the Suncor Firebag Aerodrome, busloads of evacuees from the hospital had already begun to arrive, accompanied by health-care workers who had put their own evacuation needs aside. When asked about the mood of personnel from Northern Lights Regional Hospital in Fort McMurray, Lobay replies, “There wasn’t really even a mood. Although many were exhausted, they were all focused on providing care for their patients.” In the face of enormous stress and fatigue, they’d moved everyone out of Fort McMurray safely—but now the team faced a daunting challenge of its own.

“One of our greatest challenges was to sort out who could be moved on the commercial flight and who would have to be transported using the more specialized medevac airplanes,” says Lobay. Working with the local doctors, paramedics and nurses on scene, the team helped to prioritize who would go first and how to get them out. The most critical patients went first—those who were seriously ill were sent out on air ambulance flights.

Lobay says one of the more complex problems was figuring out how to move long-term care patients and others with limited mobility. Many of those patients couldn’t simply walk onto the plane. Firefighters and paramedics carried many patients onto the airplane, and used specialized equipment to help patients into their seats. “Others who we physically couldn’t get up the steps were loaded into waiting air ambulance planes, which were continuously shuttling between Suncor Firebag Aerodrome and Edmonton.”

While Lobay and his team were assessing patients and getting people onboard planes north of Fort McMurray, Alberta Health Services staff in Edmonton were figuring out where to send patients and how to safely move them to care facilities in the city. Along with a fleet of ambulances, AHS EMS activated the disaster response bus, a specialized vehicle the size of a city bus that is set up to accommodate as many as 13 patients and five stretchers.

When Lobay’s crew arrived in Edmonton, a row of ambulances waited, ready to move the patients immediately to medical facilities. To supplement the sizable team of EMS workers called in to move patients, many other emergency workers pitched in to help, including a group of firefighters from the Edmonton International Airport fire department who were on hand to help get people off the plane and into the waiting transport.

Lobay has high praise for every person involved in the safe transfer of so many people. Despite the risk and the fragility of some of the patients being moved, he says, no one died, and the patients are doing well in the care of Edmonton hospitals. Lobay credits the heroic efforts of the staff of Northern Lights Regional Hospital, and provincial support from AHS EMS and its partners, for getting everyone evacuated safely.

“Thanks are also due to the patients themselves, who were enormously co-operative.”

The flight out
Newsroom