The bees are not able to adapt fast enough. These are animals that are built to adapt, but they can’t keep up.

The Flowers Miss the Bees 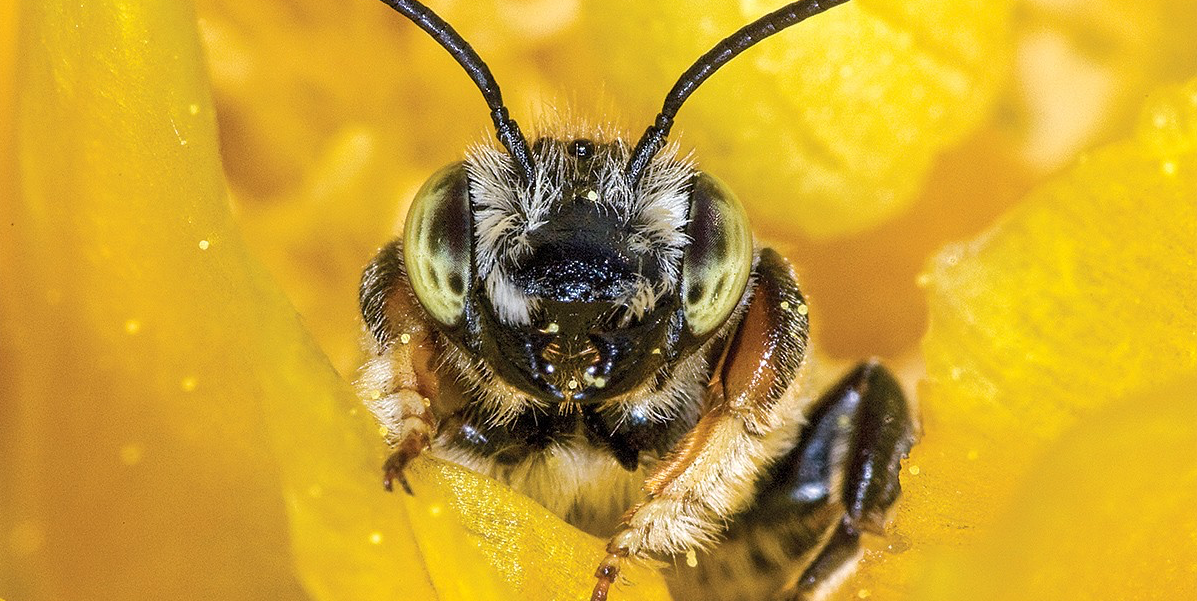 We can thank bees for one of every three bites of food we eat. Bees pollinate crops that range from blueberries and cherries to almonds, squash and coffee beans. Bees also help ecosystems thrive by encouraging a diversity of plants, keeping water and soil healthy, and providing food for animals that forage.

But we don’t know a lot about bees in Alberta — there isn’t even a complete record of what species live in the province. Jessamyn Manson, an assistant professor in the Department of Biological Sciences, is helping change that; essentially, her goal is to figure out how many bees and which species are in the province, and where.

“We don’t know what bees were doing years ago so we don’t know if things have changed,” says Manson. “There’s a very good chance we’re losing species, and we don’t know. This work is the foundation of our tracking.”

Manson also wants to know which wild bees are pollinating which plants. The data she gathers will help lay the foundation for what we know about bees across Alberta. It builds on the university’s current collections of bees found in the province. She is also collaborating with the researchers working on the Alberta Biodiversity Monitoring Institute’s Ecosystem Services Assessment project, which aims to assess pollination services provided by native bees and provide new information on the diversity of species and their ranges across Alberta.

Manson echoes what you hear from other biologists: research is vital to understanding and addressing issues of human-induced climate change. Without long-term, comprehensive data, you can’t see the patterns of a species’ behaviour or determine whether climate change is affecting that species. Her work is a first step in a long process, but Alberta is a great place to do it, given its abundance of agricultural and natural regions, says Manson.

In general, most studies examining changes in bee communities have focused on the effects of pesticides and land use; researchers have only recently started to consider the role of climate change in current and future bee distributions. Manson refers to a paper published in summer 2015, led by Jeremy Kerr from the University of Ottawa. “It was one of the first really big papers looking at wild bees and climate change,” Manson says.

The study used observations across North America and Europe over 110 years. Manson expected it would show a decrease in the southern range of bees coupled with an increase in the northern range — basically assuming that bees were moving into the cooler north as the south heated up. Instead, the study indicates that, while the more southerly bees are moving north, northerly bees are not shifting their range northward; the bottom end of their range is shrinking while the top end of their range is staying the same. The bees are being squeezed into a smaller area.

“It was a surprise,” says Manson.

Researchers aren’t certain what is causing the bees to leave the southern part of their range, but it’s worth noting that the study ruled out land use and pesticides as causes for the shift.

Temperature, however, is correlated. The research is young, but Manson says the data show that climate change is probably affecting bees. As for what that means in Alberta, the research is only beginning.

“They’re doing their job in the background,” Manson says of her study subjects. “We don’t really notice bees until they’re not there.”

Jessamyn Manson and her students have spent the past two summers systematically collecting bees in Alberta, from the Montana border to Grande Prairie. The days are hot and long — sometimes they are in the truck for 12 hours or more.

Wearing bug shirts with hoods and mesh panels so they can avoid using insect repellent, the small army of bee biologists strategically sets up pan traps along a planned grid.

On days where there is only a light breeze, the students might also use nets to capture the bees.

But it’s when they return to the lab that the truly painstaking work begins.

The students have collected an estimated 18,800 bees from more than 200 sites and identified more than 85 species of wild bees living in Alberta.

The team also measures air temperatures and precipitation to learn how bees relate to habitat and climate variables.

A Backyard for Bees

You can help by planting a bee-friendly garden with flowers that bloom at different times. Bee species have different tongue lengths, so a variety of shapes and sizes will attract a diversity of bees. Native or heirloom plants are excellent choices.

The Concern Over Early Blooms

Crocuses are popping out of the snow two weeks earlier than they did in the 1940s. So what happens if pollinators can’t follow suit?

Who doesn’t love an early spring? Certainly the prairie crocus and the aspen crocus have been taking advantage of warmer weather by flowering earlier.

A study by two researchers from the U of A’s Department of Renewable Resources shows that over 71 years, from 1936 to 2006, these Alberta plant species bloomed two weeks earlier at the end of the study than they had at the beginning. Aspen and prairie crocus awoke earlier in the season due to less snow cover and substantial warming — a mean monthly temperature increase of 5.3C in February and 1.5C in May, found Elisabeth Beaubien, ’91 MSc, ’13 PhD, research associate and longtime co-ordinator of Alberta PlantWatch (a citizen science effort to record plant bloom times), and Andreas Hamann, associate chair of research in the renewable resources department.

Spring plant phenology (when flowers emerge) is one of the most immediate and easily observed responses to climate change in temperate regions, according to the study. So what does an earlier bloom mean for bees? Bee researcher Jessamyn Manson isn’t sure if the flowers and bees will meet up in the spring.

“The change is happening so quickly,” she says. “Two weeks doesn’t sound like a lot but it’s scary. The bees are not able to adapt fast enough. These are animals that are built to adapt, but they can’t keep up.”

If the bees and flowers don’t meet to perform their pollen dance, the consequences will be severe. It would mean a reduction in flower diversity from alpine meadows to backyard gardens. This would lead to decreased soil quality and lower-quality forage for animals, including cattle. Agriculture would suffer and only self-fertilizing plants would persist. There would be less biodiversity, fewer plants and animals, poorer water quality and more soil erosion.

In fact, it’s already happening. Beaubien cites a 2015 study by the U.S. Geological Survey that found berry harvests in Alaska may be declining or becoming increasingly unpredictable due to less snowfall and warmer winters. Studies like this have her concerned.

“Things seem to be a little out of whack. We need our PlantWatch citizen scientists to note down bloom dates so we can better understand the changes that result when the climate warms up,” Beaubien says.

“There are strange things happening.”

The Flowers Miss the Bees
Newsroom