The future on display 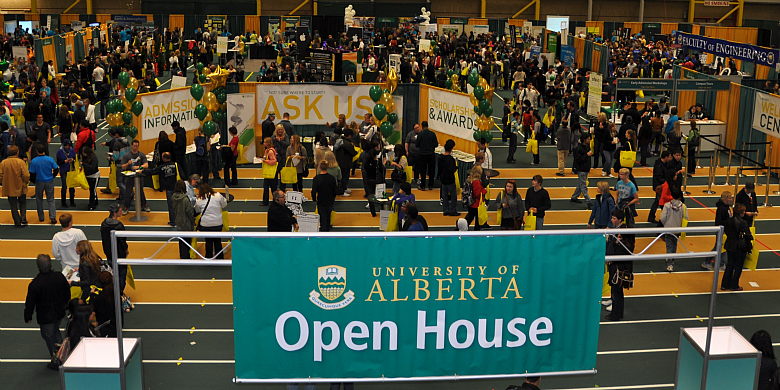 (Edmonton) Savannah Schellenberg isn’t quite sure what she wants to do with her life yet, but she is willing to invest some time to figure it out. In fact, she spent well over three hours touring through the University of Alberta’s Open House on Saturday in an effort to get a better idea on where her academic future lies.

Schellenberg and her mother spent time collecting information, checking out displays and taking one of the guided tours of campus. And while she still has time to make a decision on what she studies at university before she finishes Grade 12 at St. Thomas Aquinas high school, there are some things from the Open House that piqued her interest.

“We went to the laboratory sciences; we thought that was really interesting,” she said. “I didn’t really consider that [as a career] before but, talking with those people was educational.”

Thousands of students like Schellenberg packed the Butterdome for the academic and student services booth fair, giving attendees the opportunity to ask questions and get important information on the various departments, faculties and schools represented. Among the more-than booths, there was information for students on early admissions, as well as the chance to ask questions from residence services staff, or even don a cap to imagine what they may look like as a successful undergraduate. On-campus recruitment co-ordinator Jessica Cobb said the Open House is key for many students in choosing to apply to the U of A.

“We do see our numbers of applications going up every year, and this is one of the events that helps that,” she said.

Cobb said students attending the event came chock full of questions, from whether they were taking the right high-school classes to finding out more about the application process. She says that while the event typically draws Edmonton students, she notices that some attendees are coming from well outside the region.

“We’re starting to see people even come from out of province, which is great,” she said. “We even have 10 counsellors from the United States here visiting, so it’s a pretty diverse population.”

Trevor Buckle, manager of undergraduate student services in the Faculty of Arts, noted that student traffic at the arts booth was constant and credited that with students recognizing the versatility of an arts degree. He says that, as people realize the transferable skills acquired in arts degree, the more attractive the degree becomes. Buckle says that even for students who are not sure what they want to do with their lives, checking out the faculty that offers everything from anthropology to graphic design to music is a good start.

“It’s a great place to discover what you might like or what you want to do,” said Buckle. “We’re talking to a lot of parents and a lot of student and helping them try to find the right faculty for them.”

The future on display
Newsroom