People will rise to the occasion when there's a rise in media and social media, including the release of spectacular images, around a particular event.

The generosity of Albertans and the 'spectacle of giving'

UAlberta sociologists weigh in on why the Fort McMurray wildfire triggered the largest financial response in Canadian history. 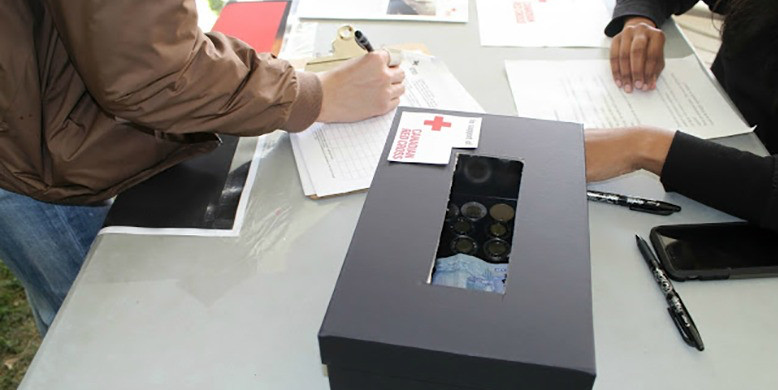 A supporter donates to the Canadian Red Cross at the UAlberta fundraising barbecue May 10 for Fort McMurray evacuees.

The response Albertans have shown residents of Fort McMurray over the past two weeks has been nothing short of astonishing. Instantly and with unfettered generosity, people have offered money, shelter, food, clothing, fuel, child care and veterinary services for pets. In the first 10 days after the city was evacuated, the Red Cross raised $86 million—the largest financial response to a natural disaster in Canadian history—which will be matched by the federal government.

Last weekend the Edmonton Journal printed a list of resources for evacuees that included every imaginable community organization. For its part, the University of Alberta provided residence accommodation for more than 1,000 evacuees, held a fundraising barbecue that raised more than $16,000 and 90 boxes of items, created a new bursary for affected students and opened up a number of campus services.

Then there are the countless individual acts of kindness no one hears about. It seems everyone wants to help.

Miracles and the media

The fire did, after all, involve the evacuation of an entire city of almost 90,000 people—hardly a common event. But it is not the largest evacuation in Canadian history. That distinction goes to the “Mississauga Miracle” in 1979, when 250,000 people were evacuated from Mississauga and Oakville after a train derailed carrying chlorine gas. During the Red River Flood of 1950 in Winnipeg, 100,000 people were evacuated.

The outpouring of support for Fort Mac, however, is like nothing we have seen before, even though Alberta saw impressive responses to the Calgary flood of 2013 and the Slave Lake wildfire of 2011. Is there something different about this disaster that triggers such munificence?

According to U of A sociologist Sara Dorow, much of the reaction can be attributed to what she calls the “spectacle of giving.” Especially in the age of social media—when images, news reports and personal anecdotes from the scene of disaster circulate immediately around the world, dominating our collective consciousness—there’s a strong desire to feel part of something bigger than ourselves.

“People will rise to the occasion when there's a rise in media and social media, including the release of spectacular images, around a particular event,” says Dorow. In the aftermath of the Fort McMurray fire, supporters have used the Twitter hashtags #ymmfire to disseminate information and #ymmhelps to rally support and raise funds.

The outpouring of love and support from Albertans & Canadians is incredible - and not one bit surprising. #ymmhelps https://t.co/7p7XTVE6VA

From the sociological perspective, one also has to wonder whether the urge to give is simply the expression of a natural human instinct towards collective survival, or the product of specific social and historical conditions. For Dorow, it’s a little of both.

She points out that we live in an age when many people at least partly construct their identities through social media—I tweet, therefore I am—so we see a deliberate attempt to project a “giving self,” she says.

But beyond the spectacle is the simple fact that many Albertans are only one degree of separation from someone who lives or works in Fort McMurray, or who survived the Calgary flood or Slave Lake fire.

In other words, it’s personal. And some studies on charity have shown we give more easily when we see our own experience reflected in the plight of the victims.

Nationally, of course, Fort McMurray is very much seen as central to Canadian identity. "The fact that Fort Mac has been called the economic engine of Canada—for better or worse—probably accounts for some of the outpouring of interest,” says Dorow.

“But as a social scientist, I'm interested in what sort of lines of belonging and inclusion are foregrounded or redrawn by how people respond,” she notes, pointing to the cultural groups that offered support to their own, such as Edmonton’s Irish community, First Nations communities and temporary foreign workers.

"It shows not only universal humanity, but also the ways people who have ethnic, cultural or historical ties respond to what they see as their communities."

Is the rapid response the right response?

Sociology doctoral candidate Eva Bogdan is currently assessing the various dimensions of flood management in Alberta, especially in the town of High River. She argues that the generosity people are now showing is not unique to the Fort McMurray fire, citing plenty of examples around the world, from the 2013 Alberta floods to Hurricane Katrina, all eliciting huge donations.

“I think perhaps what is also unprecedented this time is how quickly people have responded,” she says, “and I think it's because we've had some practice. Now people understand what's needed and that it's important to respond quickly."

Knowing how to respond effectively is as important as simply satisfying the need to give, she says. Rather than donating material goods that only bog down relief workers, a better way to help, aside from money, is to share information.

It’s also crucial to remember that disaster relief is a long game. Some of the toughest challenges arise once the adrenalin has dissipated and the fire has faded from the headlines. Helping evacuees recognize the symptoms of trauma—persistent stomach aches, headaches, change in sleeping patterns, irritability, depression—is chief among those challenges.

"It’s important to get help when you recognize those symptoms,” says Bogdan. “It can make the difference between families staying together and breaking apart, because the stress levels over time can create so much conflict."

There’s no denying natural disasters are terrible and sometimes terrifying events with devastating losses, she says. "But they can be reframed as a learning opportunity for what really is important, such as family." With the right coping mechanisms and communication skills, “you can end up even stronger than you were before."

The generosity of Albertans and the 'spectacle of giving'
Newsroom