Media accounts of perpetrators and victims reveal double standard for what constitutes a "terrorist," says researcher. 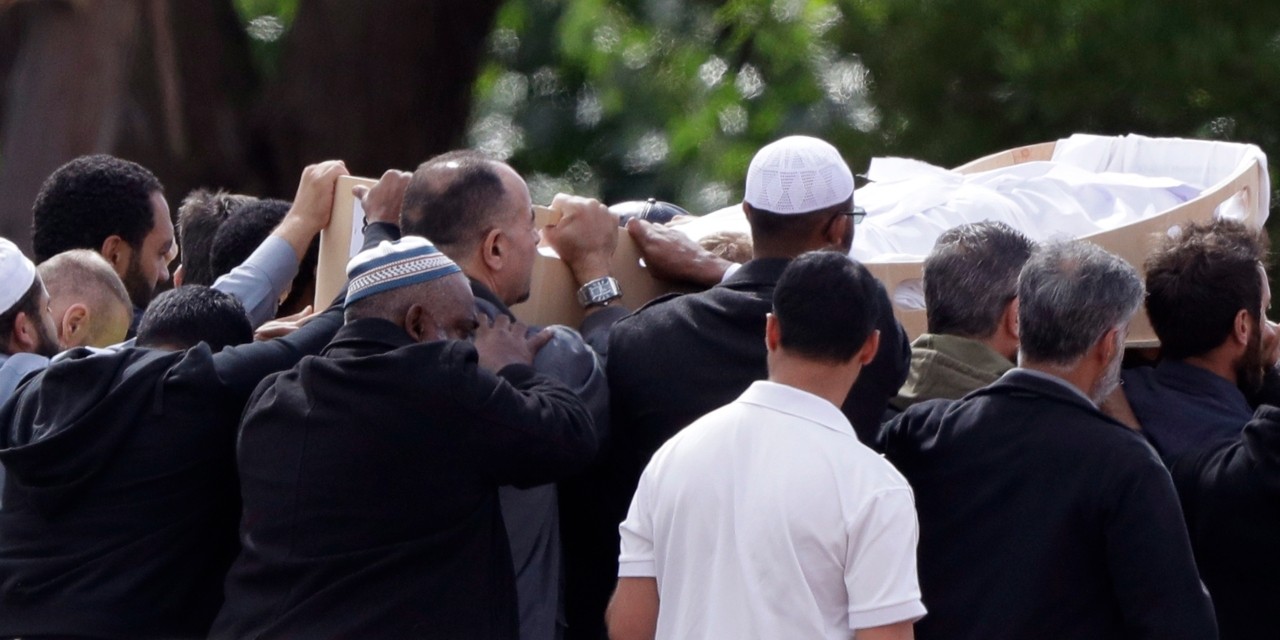 Mourners carry the body of a victim of the New Zealand mosque shootings for a burial in Christchurch on March 20, 2019. (Photo: AP/Mark Baker)

Humanity has been shocked by the recent terrorist attack on two mosques in New Zealand that killed at least 50 people and left 50 wounded.

The alleged perpetrator, who spewed his hatred of Muslim immigrants in an online manifesto, called U.S. President Donald Trump a “symbol of renewed white identity and common purpose” and denounced the “decaying” culture of the white, European, western world.

Although the carnage was condemned extensively across geographical borders, some reporting in England and Canada has been troubling.

For example, there has been the seeming reluctance of some coverage to use the label “terrorist” for the shooter, and the way the perpetrator and victims have been characterized in this and other similar events.

As a PhD candidate, I look at how media outlets cover and translate news from the Middle East. In doing this, I explore how different representations of people emerge during news production and translation.

As the news of the shootings in New Zealand quickly unfolded, I took note of the way the event was covered in news media and how the coverage was being discussed on social media.

Although the Daily Mirror headline called the alleged shooter an “evil far-right mass killer,” the body of the text and photo tell a different story. The report says he was an “angelic boy who former associates revealed was a likeable and dedicated personal trainer running free athletic programmes for kids.”

Is that the best descriptor of a man who opened fire in two mosques as people prayed?

The Mirror was heavily critiqued on social media, as reported in the Daily Sabah. Many cited its past reporting on the 2016 Orlando nightclub shooting that included the following headline: “ISIS maniac kills 50 in gay club.”

Although both acts of terror share a lot in common, the Daily Mirror portrayed the New Zealand mosque attacker as a onetime sweet, innocent, pure child, while the Orlando shooter was a demonic Islamic extremist.

The Daily Mail described the alleged terrorist as a “little blond boy” whose father died of cancer. Similarly, the Australian Courier Mail called the shooter a “working-class madman.”

Reporting on such a tragic attack using phrases like “working-class madman,” “blond boy” and “angelic boy” masks the Islamophobic motives of the accused. The shorthand also minimizes his association to white supremacy and right-wing extremism.

The attack was immediately labelled by New Zealand Prime Minister Jacinda Ardern as “terrorism.” But an informal and initial examination of reports by the BBC and, in Canada, Global News and Radio Canada, indicates that journalists at those news organizations did not use that term.

BBC’s editorial guidelines with respect to impartiality and terrorism coverage didn’t seem to be followed. Latifa Akay, a director at a U.K.-based charity group, wrote in the Guardian about an interview she did with BBC TV two days after the mosque murders. In the interview, BBC host Shaun Dominic Ley asked Akay whether she thought mainstream Muslim communities in the U.K. do enough to condemn Islamist extremism. Akay wrote:

“…somehow it felt appropriate for the presenter to re-establish an order—of Muslims as the aggressor and never simply a worthy victim. Where is the dignity of the dead, of the grieving?”

The interviewer’s question suggests that Islamist terrorism is an abominable violence, but anti-Muslim terrorism is partially instigated by Muslim communities.

The host relied on the most distorted interpretation of Islam, and by doing so implied that to be a Muslim was a significant factor in the actions of a far-right terrorist.

Last year in Canada, after an attack with a vehicle was committed outside a football stadium in Edmonton by a Somali refugee in which five people were injured, Global News and Radio Canada immediately called the incident “Edmonton terror attacks”, “Attaque terroriste: Edmonton défie la haine and ”Attaque terroriste : pourquoi Edmonton?“

A study by scholars at the University of Alabama and Georgia State University shows that terrorist attacks committed by Muslim extremists receive 357 per cent more U.S. media coverage than those committed by non-Muslims. In Canada, a study by Azeezah Kanji, the director of programming at Toronto’s Noor Cultural Centre in the open access journal, Religions, revealed that acts of violence perpetrated by Muslims received 1.5 times more coverage, on average, than those by non-Muslim ones. Thwarted Muslim plots received five times more coverage.

Research by communication scholar Wendy Naava Smolash compared media coverage of two high-profile anti-terrorism cases in Canada. Smolash found that the The Globe and Mail and the National Post used racialized signs of otherness to characterize the incident and people involved. This type of narrative raises concerns on how news media may normalize state violence against Muslims and racialized minorities.

Such coverage reinforces specific narratives about what and who should be feared the most.

This media stigma and bias have real and devastating impacts on the daily lives of Muslims.

When white individuals commit horrendous acts, it seems some news outlets portray them as people deserving of humanity. They are portrayed with complicated personalities: the little "angel” who went astray even after being revealed as a vicious and violent racist.

Those who share the same background as the alleged gunman—white and male—do not have to be anxious about the backlash against their community; they will not be asked to apologize for the unhinged among them; they will not worry about the looks they’ll get out in public.

But in the fallout of New Zealand, Muslims will have to contend with that.

Houssem Ben Lazreg is a PhD candidate in the Department of Modern Languages and Cultural Studies and an associate instructor.

This opinion-editorial originally appeared March 25 in The Conversation.