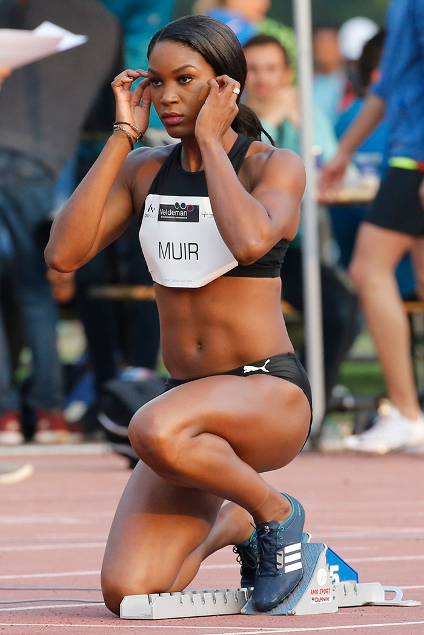 Carline Muir gets set for a race in the lead-up to the Rio Olympics.
“

It was a long wait to see if I had qualified as a fast loser.

The long road to Rio

After a series of setbacks and disappointments, UAlberta’s Carline Muir refocuses on her Olympic dreams.

In one of the entries into University of Alberta’s Universiade Pavilion, affectionately referred to as the Butterdome, a list of the school’s track and field records turns a blind eye to time.

Some of the records are new, though more are old and seemingly unbreakable. Either way, they all tell, or are in process of telling, a tale about how the best was still to come.

One of the stories yet to be fully written is the Spartan yellow and black placard dedicated to the 38.51 seconds it took first-year Pandas standout Carline Muir to clear the 300-metre track as an 18-year-old in winning the CIS Track and Field Championships in Saskatoon back in 2006.

At the time, that mark was only the latest in a meteoric rise to prominence that seemed almost limitless. Within two years, Muir would set a personal best in the 400 metres at the Beijing Olympics in a nice showing that should have served as another stepping stone in what looked like the start of a long career.

Then things got complicated.

First, her coach Kevin Tyler, former coach of the U of A’s Canadian Athletics Coaching Centre, left for the United Kingdom to coach the British national team. A rash of injuries followed as did a move to Florida where Muir found herself surrounded by people who didn’t share her dream.

After sending notice in Beijing, Muir was left on the outside looking in just four years later. She missed qualifying for the 2012 London Olympics and the 2014 Commonwealth Games.

If nothing else, however, overcoming odds is what has always driven her to push further.

Despite being told she was too small, too “breakable” as an adolescent, Muir would defiantly take to the starting line and proceed to out-sprint schoolyard after schoolyard full of classmates in her native Jamaica.

After moving to Toronto, Muir remembers taking her position in the opening heat of a local Grade 9 track meet. She stood upright and barefoot as her competitors systematically backed into their starting blocks, took their marks, and then watched helplessly as shoeless Muir vanished down the track.

She quickly began to dominate the Ontario track and field scene in three different sports: the 100-metre sprint, the shot putt and long jump. The 400-metre sprint wasn’t among them.

“My coach suggested that maybe I should try it,” says Muir. “The first time I ran it, I won but I was in so much pain, I swore I was never going to run it ever again no matter what anyone said. I guess that was a lie.”

By the time Grade 12 rolled around, Muir could have punched her ticket to any one of the athletics powerhouses in the United States. However, a visit to the U of A and a talk with coach Tyler changed everything.

Her high school coach was emphatic that she ship off to Texas A&M, but Muir knew the U of A was the right choice

“The biggest thing was I could basically call my own shots, train, go to school at the same time, and I thought it was better for my family to stay in Canada—I was basically given more flexibility.”

Success at the U of A

During her time at the U of A, Muir enjoyed the height of her success.

During the 2005-06 season, she dominated the CIS indoor national championships with wins in the 300-metre sprint, the 4x400-metre relay and the 4x200-metre relay on her way to being named Canada West Female Track Athlete of the Year and the Tissot Female Rookie of the Year. She also managed to grind out three years of a sports management degree before the call of the Olympics was too loud to ignore.

Fast forward to 2014: Muir, with the encouragement of some long-time loyalists who believed she could win, moved back to Toronto to train as part of a funding agreement with Athletics Canada.

Along the way, Muir says she has picked up some words of wisdom that she tries to apply to her life now:

“Good things happen when you distance yourself from negative people.”

“When you stop chasing the wrong things, the right things come to you.”

With a clean bill of health and focus, her road back to competition officially launched at the 2015 World Relay Championships in the Bahamas where Muir helped Canada’s 4x400-metre women's relay team to a sixth-place finish and a spot at the Rio Olympics. Then, at the World Championships in Beijing, Muir made the semi-finals in the 400 metre, shaving two-tenths of a second off her personal best.

Despite her strong showing, Olympic qualifications take place in the winner-take-all shootout known as the Canadian Track and Field Championships, which were being held at a venue Muir, now 28, knew well—the U of A’s Foote Field.

“That’s probably the first time I have gone in as a favourite and knowing the Olympics was on the line,” says Muir.  “Previously, I have come in on the back of little training or injuries and just run. This time the week leading up was nerve-wracking.”

In her semi-final heat, Muir, believing she had the race won, tried to preserve some energy and took her foot off the gas. She was passed at the finish line.

As it was, Muir qualified for the final with the second-last spot, which also meant the inside lane, which she prefers.

In the final, Muir found another gear and never looked back, grabbing top spot in a blistering 51.79 seconds and punching her ticket to the 2016 Summer Olympic Games in Rio de Janeiro.

“You only have to look to see the world-class athletes who didn’t make the Olympics because of one bad race at the wrong time. Four years of training and sacrifice can all be gone in less than a minute. This life is incredibly rewarding at times, but also incredibly tough.”

Muir, who is currently training for the Olympics in England, says she will be returning to the U of A to put the finishing touches on her degree in September—hopefully as an Olympic champion.

“Eight years ago there was no expectation. This year, there was probably too much expectation—mostly self-inflicted, I know. But this year, after the continued support from Athletics Canada, I know expectations are a win.”

Muir isn’t the only person with a U of A connection heading to Rio for the Olympics.

Alumna Lynda Kiejko will follow in her Olympian father’s footsteps and compete in 10-metre air pistol and 25-metre pistol events; Golden Bear volleyball alumnus Ben Saxton along with his playing partner Chaim Schalk, will represent team Canada in Men’s Beach Volleyball; and Tara Whitten, who recently completed her PhD in neuroscience at the U of A, is one of 19 cyclists representing Canada in Rio.

Additionally, former Pandas track and field coach Ingrid Ruys will serve as assistant manager for the Canadian track team in Rio. Marni Wesner, a sports medicine physician with the U of A’s Glen Sather Sports Medicine Clinic, will serve as lead physician for the women’s national basketball team.

The long road to Rio