The making of an accidental environmental leader 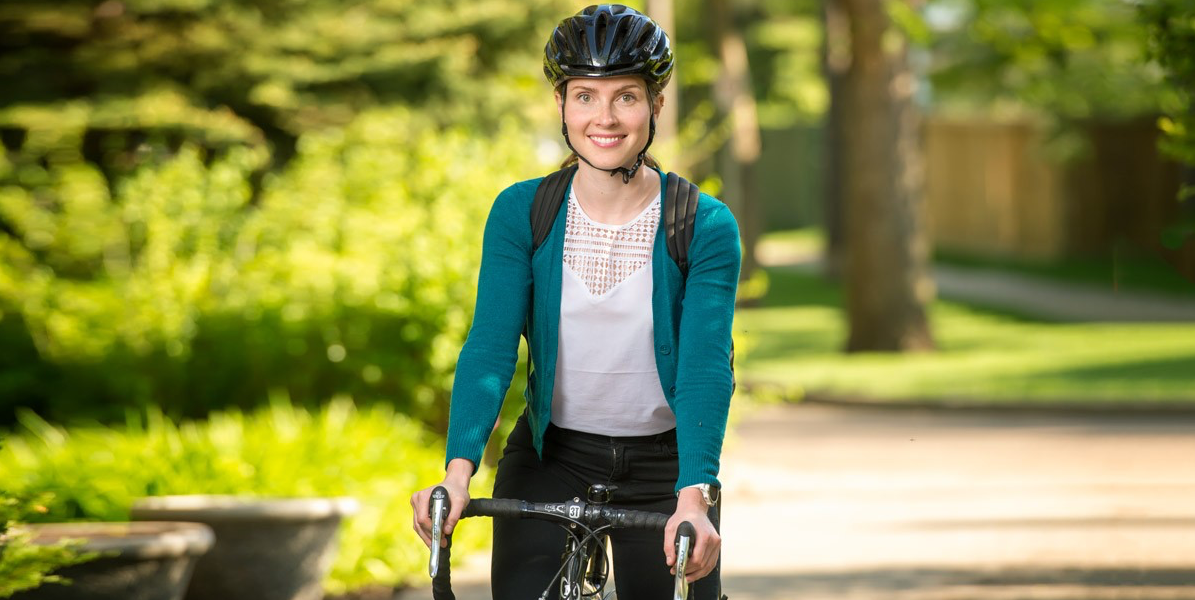 Midway through her master of science degree in health promotion, Elizabeth Campbell found herself in a leadership position advocating for the environment on behalf of thousands of young people from around the world. (Photo by Richard Siemens)

Elizabeth Campbell will tell you in all honesty she’s not a leader.

“I enjoy working with young people to allow them to reach their full potential,” said Campbell. “I see myself, not as a leader, but a facilitator encouraging young people to learn and grow.”

Leader, facilitator, call it what you will, the fact is for two years starting in 2015, Campbell was selected as part of the core leadership team entrusted with channeling the voices of thousands of the world’s youth into a single unifying call-to-action that demanded the world’s leaders better safeguard against the effects of climate change.

Surprisingly, however, Campbell—who has always done her part for the environment, whether it be undertaking small daily actions like riding her bike almost everywhere she goes, or being outside to ski, run, swim and even sail—never seriously pursued any sort of environmental activism before or even shortly after she arrived at the U of A's School of Public Health from Queen's University in 2013 to pursue her masters.

For her thesis, Campbell compared daily physical activity policies across Canada and discovered that some provinces design and execute public policy better than others. Alberta, for instance, was one of the first provinces to implement a daily physical activity policy, however the follow-up resources and support needed for it to succeed fell short.

“I’m most interested in making sure there is a link between policy and buy-in,” said Campbell, who parlayed her findings into a master of science in health promotion. “So often we have these high-level policies and there is no follow up at the local level. But it’s at the local level, at schools championed by principals or teachers who are passionate about daily physical activity, where the policy gets implemented.

The notion that good policy mixed with some resolution, resources and vigilance had Campbell wondering whether those same virtues could exact changes in climate policy.

“It was different from what I was studying in school, but I saw the link.”

Seeing that there was a possible fit between her academic strengths and shortcomings in the climate change movement, Campbell decided to see if there was some way she could do more.

Initially, she noticed a posting by Next Up, a leadership program, in partnership with the U of A’s Parkland Institute, for young people committed to the environment and social justice.

After taking the training, Campbell happened upon an intriguing opportunity to facilitate an international project sponsored in part by the Faculty of Graduate Studies and Research and partnered with The Centre for Global Education, called Taking it Global, which is essentially a network of the world’s youth who tackle global environmental challenges.

In 2015, Campbell was selected as the graduate student coordinator for the project, known as Decarbonize, to coincide with the 21st annual Conference of the Parties (COP21) international climate change conference in Paris. In this role she helped guide a team of graduate students at the U of A in a frenzied two-month search for evidence and resources to share with high school students from a dozen countries working remotely on a final white paper containing climate change policy recommendations to handed over to political leaders attending the Paris climate change conference.

It didn’t take long for Campbell to realize this service provided by the grad students was of the utmost importance because of the huge variability in what these students knew about climate change or even how to affect change.

“In the beginning, the students were pretty focused on individual behaviour changes they could make in their local environment, but a huge benefit of this program was that, by working collaboratively with schools from around the world, they understood how different people experienced climate change,” she said. "That was reflected in the policy recommendations they were making.”

So rewarding was the experience, Campbell came back in September 2016 for another round of Decarbonize, but this time it came with a twist—she would be leading representatives from high schools in 14 countries to the site of COP22 in Marrakesh, Morocco, to present the group’s recommendations on protecting the world’s water.

While policy change has the profound potential of getting millions of people who do a million different things to all pull in the same direction, signs that it works are often hard to see. However, Campbell said there was one moment in Marrakesh just before the white paper was due where Campbell realized change was afoot.

One of the largest supporters of the Decarbonized project is Sheikh Abdul Aziz bin Ali al Nuaimi, better known as the Green Sheikh, a wealthy member of one of the ruling royal families in the oil-rich United Arab Emirates, who has chosen to spend his energy dedicated to climate change rather than oil extraction.

He was listening in when one of the natural leaders on the project was addressing the group. When the student finished, the Green Sheikh said, “You know, you could be the next president of Ghana.”

“It was a moment I will never forget,” said Campbell. “Everyone in the room was like ‘yeah, he could be.’

“They all could be. We want these students to think about the bigger picture and realize that they are leaders and they can influence change.”

The group finished the paper and distributed it to the COP22 attendees. What consequences the white paper had or will have may never be known, but where the impact will be felt, according to Campbell, is when these students, and students like them, start occupying their country’s decision-making positions.

Campbell is still deciding on where to take her penchant for facilitation but for now is happy working in School of Public Health researcher Candace Nykiforuk’s Policy, Location and Access in Community Environments (PLACE) Research Lab, where she is conducting research on chronic disease prevention policy.

As for her environmental activism, Campbell says she will continue to facilitate the aftermath from COP22 and then look for another fit.

“Climate change is such a huge issue to tackle, but I think the more that people know about it and the more we’re willing to talk about it and try to create change, the better.”

The making of an accidental environmental leader
Newsroom