The mysterious Bard and peers 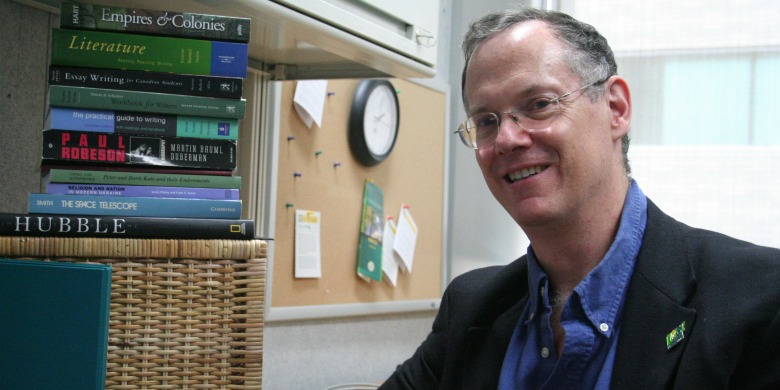 (Edmonton) The link between England’s war with Spain in the mid-1580s and William Shakespeare’s success many not be obvious, but Jonathan Hart explores the ties between empire building and literature in his new book Shakespeare and his Contemporaries.

By defeating the Spanish Armada in 1588, the English paved the way for an expanding British Empire and the global importance of English language today, says Hart, English and comparative literature scholar at the University of Alberta.

“English is a major world language now, but it has not always been that way and may not always be that way in the future,” Hart says. Prior to the war, he says, Spain was by far the strongest country in Europe and remained so for about a decade after Shakespeare’s death.

“English was not a trading language in East Asia or any other parts of the world beyond the British Isles. One of the reasons the English started exploring is that the Spanish thought they were heretics … and blocked them from trading in certain areas,” Hart explains. “So in some ways, Shakespeare was a major writer in a country that worried about Spanish power, and was fragile and vulnerable.”

Hart notes that while Shakespeare and his contemporaries have given us many expressions and ideas we use today, they lived in a time when they couldn’t fully express themselves, partly for fear of the monarchy and partly because they weren’t living in the age of biography and autobiography. This partly explains why no evidence exists of Shakespeare commenting on events, such as the war with Spain, that were shaping the British Empire. Hart notes that Ben Jonson, a contemporary, was jailed and censored.

“It’s like Shakespeare’s a sphinx. If he did comment, it’s not on record.” Even taking the times into consideration, facts about Shakespeare are hard to find compared to some of his contemporaries, Hart says. There’s no record of his schooling, the books he owned or the letters he may have written or received�nothing that points to how he amassed his immense knowledge on a wide range of subjects, including law, medicine and philosophy, for example.

“He probably went to the local grammar school, which meant that he would have had teachers who were from Oxford who’d teach him Latin and Greek. We don’t have absolute proof of that, but that’s probably what happened. We have no proof that he went to Oxford or Cambridge. And that’s why you get all these wild things about the Earl of Oxford as the author of his plays because people think he couldn’t write the works that he did because he did not go to university,” Hart says.

One Shakespeare contemporary Hart writes about is playwright Christopher Marlowe. He suggests that Marlowe, who was murdered in his late 20s, may have had a similar impact to Shakespeare if he’d lived longer. “Marlowe wrote very similar epic forms of plays like Shakespeare. ... Had Shakespeare died at that time, I’m not sure there’d be much to choose between the two of them,” he says.

By the time of his death in 1616, Shakespeare had left plenty of plays but very little information about himself compared to some of his contemporaries. Seven years after he died, he was celebrated in the First Folio�a collection of his plays. But Hart says we can’t find, Shakespeare, the man, in his works.

“The author of these incredible works makes us want to know about the other man. We don’t have evidence for that other man,” he says. “A lot of his paperwork disappeared, which leaves much to the imagination of film directors and others.”

“They’re great experimenters. They helped shape the early form of modern English and they helped  change English literature. It was a golden age of creativity. And that helped to launch English culture,” he says.

“Language and stories is what they’ve given us. And those follow trade routes throughout history. If you look at doctors, engineers or scientists, somewhere along in their education, Shakespeare and his contemporaries have helped to shape them, even if they don’t know that,” Hart says.

“Abraham Lincoln carried his law books, Shakespeare and the Bible.”

The mysterious Bard and peers
Newsroom