The new evolution of dinosaurs 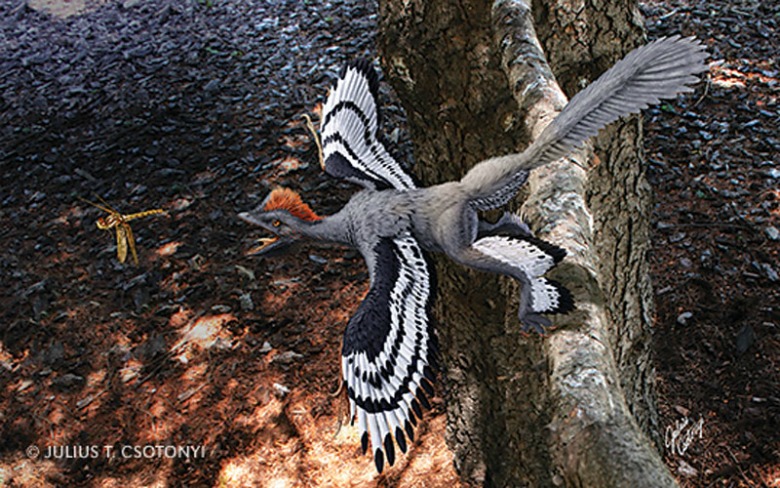 130812-anchiornis-huxleyi-csotonyi-banner
The colour patterns on the feathered dinosaur Anchiornis huxleyi (pictured above) are based on comparisons with the cellular structures of modern birds. UAlberta researcher Phil Currie helped identify the first dinosaur specimens that showed evidence of feathers. (Image: Julius Csotonyi)

(Edmonton) On an afternoon in May, drivers zip down Anthony Henday Drive in Edmonton and children race home from school, all unaware that, in a wooded creek bed just a few hundred metres away, University of Alberta paleontologists and about a dozen students are busy unearthing treasures buried nearly 73 million years ago.

This site, just a few minutes’ drive from campus and not far from the Century Park LRT station, is one of the university’s best-kept secrets: a graveyard containing the remains of at least a dozen dinosaurs.

Excavating the bones from the soft shale, the researchers use the same implements fossil hunters have wielded for more than 100 years—trowels, paint scrapers and dental picks—but they also have access to tools and techniques that are thoroughly modern. When a bone is uncovered, a student records its exact location with a handheld GPS tracking system, similar to the ones used in cars. Each night the data are uploaded to a computer, creating a three-dimensional map of the bonebed. Later, back in the lab, some of the bones will be examined with CT scanners and electron microscopes to extract from these old bones every possible bit of information about how the dinosaurs lived and, ultimately, how they died.

Work by researchers based at the U of A has challenged many basic assumptions about dinosaurs—proving that some had feathers and that even the giant predators sometimes travelled in herds—while greatly expanding the number of known species and, occasionally, even pruning and grafting the dinosaur family tree.

A hotbed for fossil hunters

Although modest by the scale of some bonebeds in Alberta, the Danek bonebed, as this one is called, is significant for its density and sheer variety of specimens. There are about five to 10 bones per square metre, and this year alone, students have uncovered more than 50 bones from up to four different species. They range from the metre-long femur of an Edmontosaurus to the miniature teeth of a baby hadrosaur, measuring just a few millimetres. But what’s equally exceptional about the Danek bonebed is that it sits well within Edmonton city limits. This makes it the perfect place for students in the U of A’s Paleo 400 course to cut their teeth.

The activity at the Danek bonebed also speaks to why the U of A has become such a destination for paleontological research. There are just so many dinosaur deposits in the province.

At the turn of the last century, Alberta became famous for its easy finds, and the province suffered through a tremendous amount of indiscriminate digging. The “Great Canadian Dinosaur Rush” of the 1910s attracted foreign fossil hunters who hurriedly extracted the province’s dinosaur wealth and shipped it off to museums and collections around the world. Then, in 1920, a small group of professors decided it was essential that the U of A be at the forefront of dinosaur research. That same year, the U of A mounted its first expedition, to collect fossils from the Red Deer River Valley near Drumheller and what is now Dinosaur Provincial Park. In 1965, the university hired its first vertebrate paleontologist and created a research program that today rivals any in the world.

“People from all over now come to the U of A to work with our researchers, study our specimens and go into the field here,” says Clive Coy, head technician in the U of A’s dino lab, who has personally prepared many of the 250,000 fossil specimens in the university’s paleontology collection.

Based on the wealth of that collection and the campus’s proximity to Alberta’s various bonebeds, the university was able to attract superstar academics such as Phil Currie, considered by many to be one of the top five paleontologists in the world—and rumoured to have been the model for the paleontological protagonist in Jurassic Park, Dr. Alan Grant. These researchers, in turn, are attracting and training a new generation of paleontologists from as far afield as Asia, Australia, Europe and South America. Together, they are challenging many of our long-held beliefs about dinosaurs.

“Our grandfathers’ view of dinosaurs was that they were large reptiles, ‘terrible lizards,’” says Scott Persons, a PhD student whose own research has focused on the most terrible of lizards, the tyrannosaurs. “Then there was a dinosaur revolution that changed our thinking of dinosaurs from being cold-blooded sluggards to warm-blooded, athletic and probably socially gregarious animals.”

One of the great things about the fossil record is that we find new things all the time,” says Michael Caldwell, a professor of paleontology and graduate of the U of A’s program. “New data has a spectacular capacity to completely rewrite the way we thought we understood a particular story. Whose ancestor is this animal? Did early birds fly?

“There have been some 500 million years of vertebrate evolution. That’s an incredibly long period of time, and a lot of rocks have weathered away over the years. But there’s a lot of information caught between the pages of those sedimentary books, and you never know when the fossil record is going to cough up something for you,” Caldwell says.

“That’s the best part: that a surprise awaits around every corner.”

The new evolution of dinosaurs
Newsroom