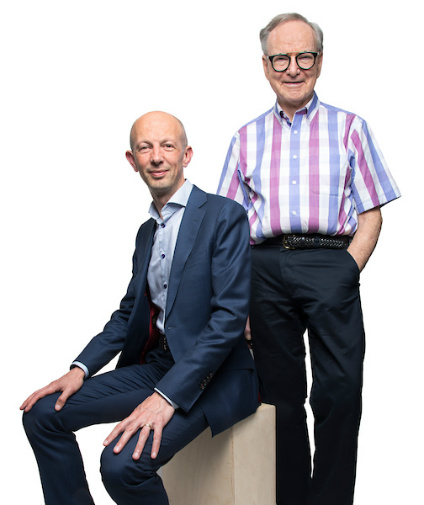 Endocrinologist Peter Senior (left) with patient Bob Teskey, one of the first to receive an islet cell transplant in 1999.

The next frontiers in Type 1 diabetes treatment

With two new world-leading studies, the Alberta Diabetes Institute at UAlberta is going where no one else is in the quest for new, better diabetes treatments. 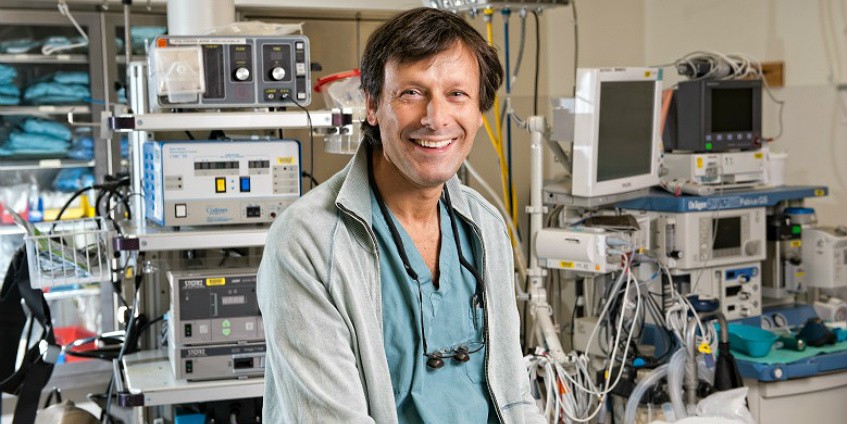 UAlberta transplant surgeon James Shapiro led the development of the groundbreaking Edmonton protocol for treating Type 1 diabetes. Now, he and his team are working on two promising new research trials.

“In fact, it was 18 years ago that we embarked on what today is known as the Edmonton Protocol,” said James Shapiro, a U of A transplant surgeon and lead pioneer of the protocol, which implants pancreatic islet cells into the liver of patients with Type 1 diabetes.

The technique renders many patients insulin-independent, vastly improving their quality of life.

“Today, we’re moving to the next level, expanding on past discoveries and tackling their limitations in the journey toward a powerful revolution in diabetes treatment,” added Shapiro.

“The Edmonton Protocol can never be the final answer for Type 1 diabetes for two reasons,” explained Peter Senior, a U of A endocrinologist and co-investigator with Shapiro’s research group.

“One is that we will never have enough donors to treat all the people who could potentially benefit. The other is that the anti-rejection drugs used to keep the transplanted cells alive have some toxic side-effects.”

He added, “So the direction we are moving toward is, can we have a limitless supply of cells, and can we manipulate them or provide them in a way that does not require the use of anti-rejection drugs?”

One promising research path the team is working on—implanting a device much like a thin credit card containing human insulin-producing stem cells, but shielded from the immune system—aims to provide an unlimited supply of insulin-producing cells transplanted into the human body while protecting them from attack.

“The first step of that study, conducted in collaboration with ViaCyte in San Diego and our institute, is to ensure the approach was safe, was achieved,” said Shapiro.

However, in some patients, scar tissue was forming around the devices, blocking insulin secretions and limiting cell survival, he explained. So the research team is now studying a modified device containing tiny laser pores.

“The micro-perforations allow blood vessels to grow inside the device, allowing many more stem cells to survive,” explained Shapiro.

“We still need the anti-rejection drugs for now, so it’s not the final answer, but an important step in our journey.”

Even though the team is not at the finish line, no one else has come this far with the implantable device approach, added Senior.

“If this works, it will inform our next study, which will focus on how to keep the immune system out of it,” he said.

Once fully developed—which is expected to be years from now—the approach could be used for other diseases such as renal failure and hemophilia, Senior added.

“In Type 1, the body’s immune system attacks its beta cells, which make insulin within the pancreas,” explained Senior.

“Our new trial involves a unique sequencing cocktail of drugs that essentially reprogram the immune system and rescue the remaining beta cells in hopes of tackling the process early on and reversing it,” he added.

The first patient has responded surprisingly well thus far, said Shapiro, who is the principal investigator. The group is now recruiting more patients to expand the trial.

“A lot of diabetes patients have grown frustrated waiting for a cure,” pointed out Senior.

“I hear them tell me it’s been 20 years and we’re still not that much farther ahead. It’s had a powerful impact on me, as these are the people I’m trying to help,” he said. “It’s important for them to know that a cure can come from surprising places, and that every phase of research brings us one step closer.”

Both physicians attribute the U of A’s significant contributions in Type 1 diabetes research to a long tradition of joint leadership in transplant surgery and immunology research, and endocrine and diabetes expertise.

“In other parts of the world, research is often led by only one or the other team, but rarely jointly,” said Senior.

“In Edmonton, both areas have had strong leadership and good vision to bring their complementary skills together, and the sum is far, far more than the parts,” added Shapiro.

To learn more about the islet transplant trials and eligibility, visit the Islet Transplant Group website.

For further information and other opportunities to participate in diabetes research, visit the Alberta Diabetes Institute website.

The next frontiers in Type 1 diabetes treatment