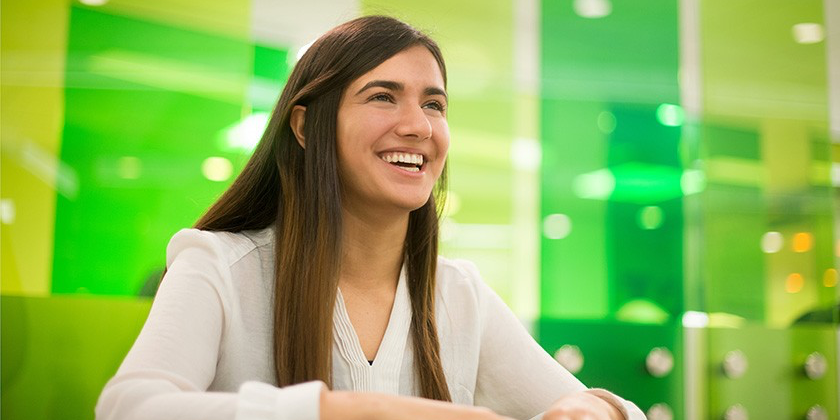 Taking a page from the heroes in her childhood literary adventures, Yasmin Rafiei is setting off on her own quest to conquer the world. After completing her bachelor of science this coming spring with a major in biological sciences and a minor in sociology, the University of Alberta’s newest Rhodes Scholar is on her way to Oxford, no small feat for the person who in high school felt apathetic towards academia.

“I was the kid who wanted to tackle world problems,” says the self-described avid reader. “I’d see characters like those in Harry Potter, The Lion, the Witch and the Wardrobe, and The Hobbit, and I identified with those characters, because they were young people who could solve the most complex problems that adults couldn’t solve.”

Rafiei describes an awkward stumble through adolescence as quelling her resolve to solve those complex problems. It was only when she found her feet firmly planted on University of Alberta soil that she realized she actually could make a difference in the world.

“I started realizing that there is so much support and mentorship and inspiration available to start solving these big problems, and I found out where to go to bring those ideas into reality.”

The three narratives guiding Rafiei’s academic path are health, social entrepreneurship, and philosophy. She credits student volunteering with the student-led Health and Wellness Movement as providing her with a platform for bold innovation and experimentation.

“Ever since I was a child, I’ve always thought there was this beautiful complexity between the arts and the sciences and the way they interact with and enhance each other. It’s unsettling and curious and inviting.” —Yasmin Rafiei

While volunteering at the Stollery Children’s Hospital, Rafiei noticed there was no difference in programming resources available for short- and long-term patients. She came up with the idea of StolleryBots—a lego robotics program—and boldly pitched the idea to Edmonton entrepreneur Larry Anderson (founder and president of the ManCap Group). He liked it so much that he sponsored it, and the program has been successfully running weekly for 10 months.

That first taste of seeing patient care in action set Rafiei on a trajectory of applying innovative thinking to the healthcare system. She perceived gaps as places her ideas could fill, giving her the space to let her creativity soar, much as it did for her childhood heroes.

An early interaction with a University of Alberta diabetes researcher stuck with Rafiei all the way to her second year of university, and inspired her to approach James Shapiro, a world renowned diabetes researcher known for his work with the Edmonton protocol, a revolutionary islet transplantation treatment for brittle diabetes.

She has been working in his lab ever since and is now working with Shapiro’s team on a deviceless approach to reduce the body’s immune reaction to transplants in diabetes patients.

Around the same time she started researching with Shapiro, Rafiei founded TEDxUAlberta as a way to highlight the mentorship and inspiration around her. “I wanted to take the ideas and the people who embodied them and champion them on an international stage. I see great value in Edmonton and highlighting Edmonton’s people.”

TEDxUAlberta debuted in the fall of 2015 with 100 attendees and more than 56,000 viewers from around the globe who tuned in to the post-event footage.

A seemingly natural-born leader, Rafiei encountered the perfect avenue to foster her talent for leadership as a member of the inaugural class of the Peter Lougheed Leadership College (PLLC) and recounts how she took their early slogan to heart: “how will you change the world?” She says the experience has been the highlight of her degree and the place to fully realize the reality of her innovative ideas.

"Yasmin Rafiei has been an outstanding member of PLLC's pioneer class,” says The Right Honourable Kim Campbell, Founding Principal of the Peter Lougheed Leadership College. “She combines academic excellence with a commitment to contributing to the experience of all students and represents the qualities of character and curiosity that we encourage in PLLC scholars.”

It was through the PLLC that Rafiei was challenged to come up with an idea to solve what she sees as challenges in the healthcare system. Her brainchild is Venture Healthcare, a 10-week summer internship for undergraduate students from a range of social backgrounds with diverse interests in healthcare. “The goal of Venture Healthcare is to give all students the opportunity to get their feet wet in healthcare.”

“Thinking back to my first and second year science classes, we’d have discussions, and everyone would agree with each other. But as soon as I entered the PLLC, I remember the first thing my forum members did was disagree. It was disjointing, and it rattled our group. We worked through some serious conflicts, and it taught me a lot about team building and leadership.”

Rafiei advocates that deciding to pursue a general science degree rather than specializing or choosing the honours path gave her the flexibility to weave together the two sides of her character and pursue the opportunities fostered by the PLLC.

“Ever since I was a child, I’ve always thought there was this beautiful complexity between the arts and the sciences and the way they interact with and enhance each other. It’s unsettling and curious and inviting.”

The road to Rhodes

After one whirlwind weekend in Winnipeg earlier this month where she participated in a two-day interview and was one of three recipients chosen out of 12 finalists, Rafiei’s life was forever changed with the news that she was on the road to becoming a Rhodes Scholar at Oxford.

Her elation at winning one of the world’s most prestigious scholarships was shared by Martin Ferguson-Pell, Vice-Principal of PLLC. "I'm absolutely thrilled. Yasmin is one of those outstanding students who has the confidence to just go for it, and that's half the battle," says Ferguson-Pell. “She has a very strong sense of social responsibility, a deep enthusiasm for life, a certain fearlessness, and a natural ability to get others on board with what she's doing."

Rafiei will start at Oxford next fall to pursue two Master’s degrees: one in global health science, the other in public policy. She’s excited to nourish her love of writing at the almost-mythical Oxford, the birthplace of so many literary greats, many of whom she grew up reading as a child.

“Oxford is where imagination goes to become reality. I look at Oxford, and I see the next step in my story. As someone who is curious and driven to innovate, it seems like the ideal place to nourish and grow my capacity to think critically about contemporary issues in healthcare.”

After Oxford, Rafiei has her eyes set on med school to pursue her dream of improving patient care systems and the accessibility of healthcare.

So, what’s the moral of her story? “My one piece of advice is if you’re passionate about something, just get started. I think the common discourse is that university is just a stepping stone, but it’s not. The university is a beautiful place to grow and thrive and try things in a safe environment. Pursue your passions to your full capacity. Push yourself now.”