The race against Zika

This is the first super-resolution microscopy showing replication of Zika virus in a human cell. The images were taken Jan. 25, 2016. The red dots represent virus replication sites, the green structures are actin and the large blue structure is the cell nucleus. (Video: Shangmei Hou)

While most of us were first hearing of a strange, new and dangerous mosquito-borne virus stampeding across South and Central America and into Mexico, University of Alberta virologist Tom Hobman and his team were months deep into a plan looking for ways to diagnose and treat this threat.

“Unfortunately, there is a feeling that this is going to get a lot worse before it gets better,” said Hobman, a professor in the cell biology department of the U of A's Faculty of Medicine & Dentistry.

What “this” happens to be is an outbreak of the Zika virus. First isolated in monkeys in Uganda in 1947, the Zika virus is a member of the flaviviruses—a classification of viruses that also includes the West Nile and dengue fever viruses.

Older strains of the Zika virus were not recognized to cause serious disease. In most cases, infections resulted in flu-like symptoms that disappeared in less than a week. Because these outbreaks were self-limiting and outcomes from infection were relatively benign, Hobman said, there was not much incentive to study the virus.

That changed in May 2015, when an outbreak of the virus in Brazil coincided with a 2,700 per cent increase in reported cases of microcephaly, an often fatal congenital condition associated with incomplete brain development in newborns.

“If you think of the cost—the health-care and personal cost—of having a child with microcephaly, it’s enormous,” said Hobman. “In many cases, children born with this condition die within the first year, but others can live relatively long lives, even those with severe mental and physical disabilities.”

So far, there have been at least three imported cases in Canada, at a time when there is no vaccine, no treatment and the diagnostics are not overly reliable. In the United States, a concerted effort to develop a vaccine will soon be under way, but it could still be 10 years by the time the vaccine receives regulatory approval for widespread use.

This yet-unproven link to microcephaly, according to Hobman team member Daniel Limonta, a post-doctoral fellow, is “highly unusual for this group of viruses. You don’t normally see mother-to-fetus transmission.”

Limonta pointed out that there is a recently published study suggesting the virus can be transmitted sexually.

Compounding the problem further is that the disease spreads at an unprecedented pace. Since the outbreak occurred in Brazil last May, the virus is thought to have spread to every country in the Americas except Canada and Chile. 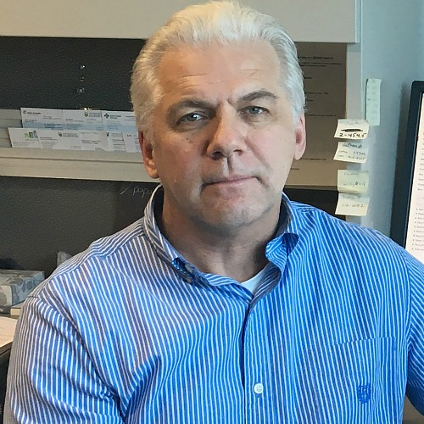 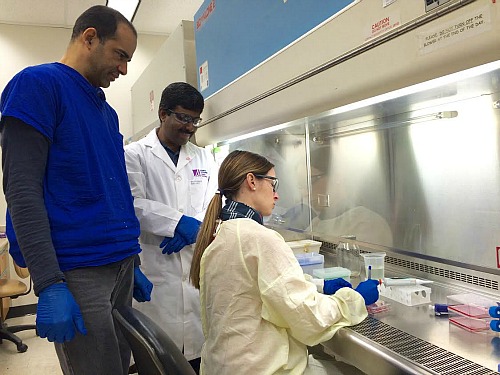 (From left) Daniel Limonta and Anil Kumar supervise as Valeria Mancinelli infects cells with Zika virus in a biocontainment hood.

In the wake of all this, the U.S. Centers for Disease Control and Prevention has taken the extreme measure of issuing travel advisories for pregnant women and women thinking about getting pregnant, suggesting that they not travel to more than 20 countries in the Americas where the Zika virus is endemic.

Meanwhile, Hobman’s team has begun following up on its strategy to pinpoint diagnostic tools to identify those who are infected with the virus and therapeutics to fight it.

Anil Kumar, another post-doctoral fellow in Hobman’s lab, said there are libraries of approved drugs that he will be testing to see whether any of them have any antiviral activity against the virus.

“The great part is these drugs have already been approved, so they’re safe,” said Kumar. “We do have a good head start, as we have already done this type of work on dengue and West Nile.”

And although treatments with the ability to block mother-to-baby transmission have a longer time horizon, the promise for creating tools for diagnosing the virus is more immediate.

“I don’t think you have this collection of virology experts anywhere in the country, at least that work with these types of viruses.”

“There is a protein that we will make antibodies against. These antibodies are often used in a diagnostic test,” said Kumar. “This is something we can probably do within a year.”

Hobman says doing research at a university that is a powerhouse in virology has allowed his team to get a head start on this work, as well as access to some of the world’s best collaborators—many of whom are next door in the U of A’s Li Ka Shing Institute of Virology.

“I don’t think you have this collection of virology experts anywhere in the country, at least that work with these types of viruses.”

The race against Zika
Newsroom