The researcher's guide to the galaxy

Post-doc develops new classification system for galaxies based on movement of stars. 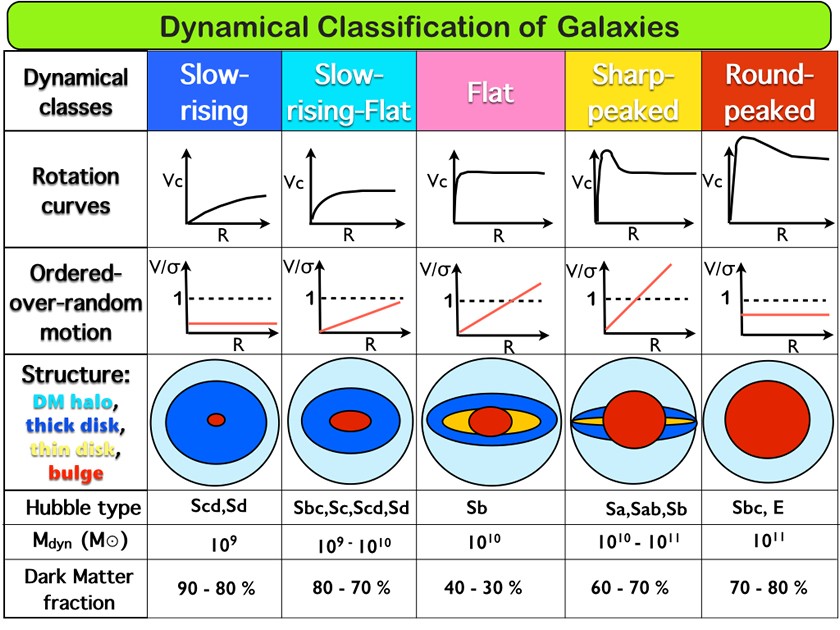 The Dynamical Classification of Galaxies developed by Veselina Kalinova offers a new way of looking at how galaxies form and evolve.

(Edmonton) Using data on the motion of distant galaxies, a post-doctoral fellow at the University of Alberta has developed a new classification system for galaxies based on the movements of their stars.

Currently, galaxies are classified based on their appearance, the Hubble Classification. Three main types of galaxies—elliptical, spiral and irregular—are further categorized according to specific visual characteristics.

“My Dynamical Classification has a different scope from the photometric classification of Hubble," says Veselina Kalinova, who is the latest holder of the Avadh Bhatia Women's Postdoctoral Fellowship in the U of A's Department of Physics. "It aims to answer questions about galaxy formation and evolution, going deeply in the 'DNA' of the galaxies presented by their rotation curves.”

A galaxy’s rotation curve is a graph of the orbital velocities of the stars in that galaxy versus their distance from the galactic centre. Kalinova has distinguished four main types of rotation curves, leading to the creation of her Dynamical Classification system.

“Hubble Classification is still useful, but not complete. It describes only the appearance of the galaxies by morphology, but cannot give information about the galaxy’s gravitational potential, stellar orbits, stellar populations, metallicities, or the evolution of the galaxies in general.”

Kalinova has also shown a link between the shape of the rotation curve of a galaxy and the amount of dark matter the galaxy contains. Information like this is indispensable to scientists studying the dark-matter problem. The majority of matter in our universe is theorized to be invisible dark matter, which has yet to be directly detected. Kalinova’s work shows that galaxies with the most dark matter have gradually evolving rotation curves, whereas galaxies with sharp-peaked rotation curves contain less dark matter.

“We can make the following parallel: Hubble photometric classification is like describing a person with his appearance—characteristics such as the colour of his eyes or hair, height, etc.—while the Dynamical Classification is like making an internal exam of the person by defining his blood type, parental tree (DNA) and internal condition.”

The researcher's guide to the galaxy
Newsroom