The social life of ink 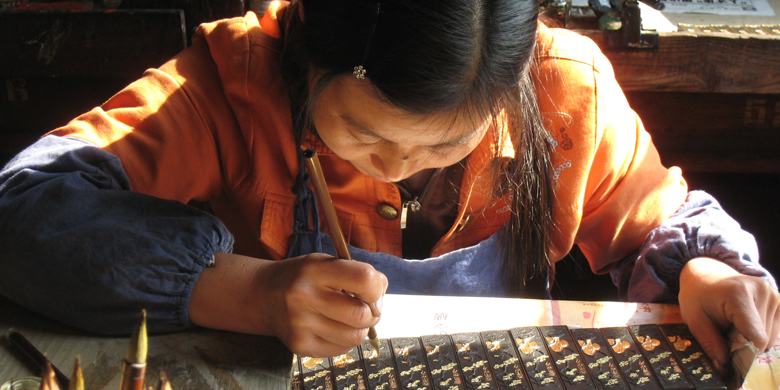 120312-inkbanner
A woman hand-paints designs on inksticks in a finishing room at an ink factory in central China. The designs replicate those of the great Ming Dynasty ink maker Da-Yue Cheng who produced his catalogue in 1605, the year Shakespeare wrote King Lear.

(Edmonton) Contrary to popular belief, the true genius of Johannes Gutenburg was not the printing press for which he is most often given credit. Both the Chinese and the Koreans had come up with versions of the press before him anyway, complete with moveable type.

What made Gutenburg’s invention truly innovative was the oil-based ink that adhered to type and was celebrated for its exceptional blackness and longevity. No one has been able to duplicate the precise formula since, but rumour has it Gutenburg’s own urine was the secret ingredient.

Such tantalizing revelations are the stuff of English professor Ted Bishop’s forthcoming book, The Social Life of Ink, which he plans to preview this week in annual Edmund Kemper Broadus Lectures, a three-part showcase series hosted by the Department of English and Film Studies.

Bishop has been researching his “commodity biography” for about five years, travelling to Texas, Budapest, Buenos Aires, Paris, Geneva, Istanbul and various sites in China teasing out the source of this storied material embodiment of the written word and graphic image, as well as the thousands of recipes used to conjure it up.

“Ink always had an element of the local to it, and throughout the 19th-century, big companies guarded ink recipes as jealously as software is guarded today,” says Bishop. Even Shakespeare, he says, would likely have mixed up his own home recipe before sitting down to pen Hamlet.

Partly funded by the Social Sciences and Humanities Research Council, The Social Life of Ink aims to trace the uses and significance of ink through the ages, from the art of the Chinese ink stick which reached its zenith during the Ming dynasty, to the world’s oldest Qur’an of the 10th century, to today’s common ballpoint pen.

Beyond providing fodder for a plethora of amusing anecdotes, however, Bishop says ink, and how it’s used, offers “a good index to the character of a society.”

In the Western world, for example, good handwriting had until recently long been sign of education and cultivation. Today children in school no longer learn cursive writing, and ink has become largely invisible, argues Bishop. We tend to see right past it to the concepts behind, and in the digital world, it could be said ink has no material existence at all.

“I realized my whole career is defined by ink,” says Bishop. “I’ve spent my life reading it, writing with it, yet I never thought about it."

“We have a kind of utilitarian attitude towards the word that perhaps other cultures don’t.”

The Qur’an has only within the last century been mass produced, since their hand-made construction was considered part of their sacred authenticity.

“And students I talked to in China, lament the fact they only take calligraphy until Grade 12 now. They feel something has been lost.” Throughout Chinese history, ornate ink sticks, some of them meant only for show, were considered signifiers of affluence, privilege even decadence.

Bishop’s Broadus Lectures will begin March 13 at 3:30 p.m. with fascinating intrigue around the invention of the ballpoint pen in the 1940s, then progressing backwards to expound on ink’s history and social significance March 15.

In the final session March 16, Bishop will teach audience members how to make their own ink—grinding pigment-loaded gall nuts (small growths that appear on oak trees used to produce the Dead Sea Scrolls), and mixing with water and gum arabic for adhesion. All lectures will be held in Humanities Centre L-1.

The social life of ink
Newsroom