The state of water 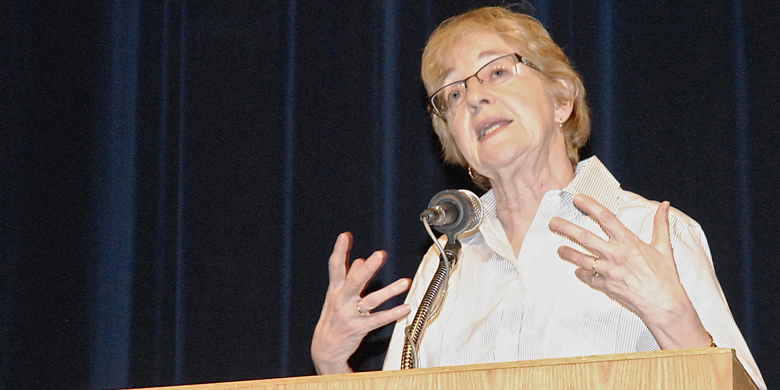 (Edmonton) According to self-described “water warrior” Maude Barlow, invited to campus this week by the University of Alberta’s Office of Sustainability, there has been some good news in the battle over the planet’s water.

In 2010, the United Nations General Assembly voted to declare the human right to water and sanitation legally binding. It was a surprise, as few expected the vote to go that way, says Barlow, national chairperson of the Council of Canadians and recently named advisor on water to the United Nations.

In debates preceding the momentous decision, there seemed to be huge resistance to the idea of access to clean water as a human right, especially from transnational corporations. After the motion was introduced by the Bolivian ambassador to the UN,  “it was a month of great despair, anxiety and gnashing of teeth,” Barlow told her audience at the U of A’s Myer Horowitz Theatre March 22. “Canada and other countries said it needed more study.”

In the end, however, 122 nations voted in favour, with 41 abstentions including Canada. One consequence is that the Canadian government is now obligated to provide clean drinking water and sanitation to all First Nations communities, “a tremendous breakthrough,” says Barlow.

And yet despite that moment of triumph, the fight over water is only beginning, she says. Global demand is sharply on the rise, while some groundwater aquifers are emptying out, leaving many places in the world with severe water shortages. In fact water scarcity is the greatest cause of child deaths in the global south, with a child dying on average every three and half minutes: “We are a planet in crisis, and we haven’t taken it seriously.”

Barlow was invited to the U of A to celebrate international Water Day, designated by the United Nations to create awareness around the global water scarcity crisis.

“One of our commitments is to get communities talking about and advancing fundamental understandings of the various and complex factors underlying sustainability,” said U of A president Indira Samarasekera in her introduction to Barlow. “That’s why this speaker series is so important.

“The University of Alberta strives to create an intellectual arena in which no sides are taken until research and evidence point to the best available answer. Maude Barlow is a leading proponent of an important side of the water debate…an acknowledged leader in the international water-justice movement.”


Barlow’s talk, entitled “Blue Covenant: The Global Water Crisis and the Fight for the Right to Water” was part of the U of A’s Sustainability Speaker Series.  It was also one more contribution to an ongoing debate on the future of water launched by a panel discussion held at the U of A last month, which included Sunita Narain, director general of the Centre for Science and Environment, Peter Brabeck-Letmathe, chairman of the board of Nestlé, and Steve Hrudey, U of A professor emeritus in analytical and environmental toxicology.

Barlow also warned against the increased privatization of water delivery services. She said a new trade agreement between Canada and the European Union could make it even harder for governments in Canada to protect water from exploitation by transnational corporations. The proposed Comprehensive Economic and Trade Agreement would give European companies the right to bid on many services that are currently public, including water delivery.

“European companies are chomping at the bit, because they know this is going to give them a foot in the door to deliver water in our country on a for-profit basis,” says Barlow.  She added that the Canadian government announced three years ago it would only fund municipal water infrastructure projects that agreed to public/private partnerships.

A big problem underlying the water crisis is the emerging “green economy,” she says, which aims to put a price on the environment. The United Nations, for instance, recently released a report saying nature is worth $71 trillion dollars to the global economy.

And while it might seem at first like a progressive move to assign economic value to natural systems�such as rivers�so they can be more easily protected, it is in fact “an incredibly dangerous game,” says Barlow. If an ecosystem such as a lake cannot be shown to be “worth more if left alone than if transformed as a tailing impoundment area, it won’t be able to compete.”

Barlow concluded that the world must see water as having intrinsic rights independent of human use, since it is the most important element of living ecosystems.

“We have to start understanding that water and nature were not put here for our pleasure, profit and convenience…we have to think fundamentally differently and align our laws with those of nature.”

The state of water
Newsroom