The stuff of life hitched ride to Earth on asteroid 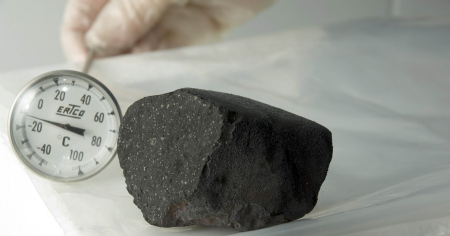 (Edmonton) Detailed analysis of the most pristine meteorite ever recovered shows that the composition of the organic compounds it carried changed during the early years of the solar system. Those changed organics were preserved through billions of years in outer space before the meteorite crashed to Earth.

The research team, led by University of Alberta geologist Chris Herd, analyzed samples of a meteorite that landed on Tagish Lake in northern British Columbia in 2000. Variations in the geology of the meteorite samples were visible to the naked eye and indicated the asteroid, from which the meteorite samples originated, had gone through substantial changes.

The researchers began looking for variations in the organic chemistry that corresponded with variations in the meteorite's geology. Herd says they found a surprising correlation, which gave researchers a snapshot of the process that altered the composition of organic material carried by the asteroid. Among the organic compounds studied were amino acids and monocarboxylic acids, two chemicals essential to the evolution of the first, simple life forms on Earth.

Herd says the finding shows the importance of asteroids to Earth's history.
“The mix of prebiotic molecules, so essential to jump-starting life, depended on what was happening out there in the asteroid belt,” said Herd. “The geology of an asteroid has an influence on what molecules actually make to the surface of Earth.”

Herd says that, when the asteroid was created by the accumulation of dust around the infant sun, it contained ice. The ice warmed and turned to water, which began percolating and altering the organic compounds buried in the rock.

The Tagish Lake meteorite is considered to be one-of-a-kind because of its landing and handling. It was January when the meteorite exploded at an altitude of 30 to 50 kilometres above Earth and rained meteorite fragments down on the frozen, snow-covered lake. The individual who recovered the samples consulted with experts beforehand and avoided any contamination issues.

Herd says the meteorite's pristine state enabled the breakthrough research. “The variations in the organic makeup are true to what was happening inside the asteroid,” said Herd. “This is exactly what has been orbiting in the asteroid belt for the last 4.5 billion years.”

The research will be published June 9 in the journal Science.

The stuff of life hitched ride to Earth on asteroid
Newsroom