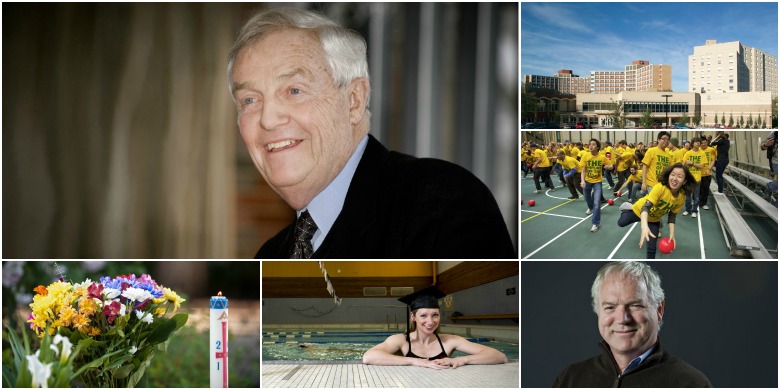 (Edmonton) Every university year has its ups and downs, but perhaps none more than 2012 at the University of Alberta. It was a year full of momentous occasions, from the grand opening of the innovative Edmonton Clinic Health Academy Jan. 18, to a September that saw the U of A welcome more than 39,000 students—the most in our history. It was also a year in which we engaged in vigorous debates, celebrated our talented people and their achievements, and even set a world record. We shared in the excitement of the graduating class of 2012, we welcomed new people to campus, and we mourned the people we lost. Through it all, we showed the strength and spirit that connect the U of A’s students, faculty, staff and alumni as a community like no other.

1. Creating a first-year community at Lister (July 23)
The move to make “Classic Lister” a first-year residence starting in September 2013, along with changes to alcohol rules in all U of A residences in Edmonton, sparked a passionate debate. An update to this story also ranked high among the year’s most-read stories.

2. Gold does it—again! (Feb. 3)
The U of A reclaimed the Guinness world record for largest dodgeball game when 4,979 students, faculty, staff and alumni packed the Butterdome Feb. 3 for a battle royale that saw the gold team emerge victorious for the third time.

3. Vigil offers light for a dark day on campus (June 18)
A powerful symbol of hope after the horror of the June 15 incident at HUB Mall, a candlelight vigil united the UAlberta community in resilience and support for the victims and their families.

4. New dean of Medicine & Dentistry (March 30)
D. Douglas Miller is an internationally respected cardiologist and clinical scientist with a proven track record as a medical-school dean. He was also an exceedingly popular choice to head up the U of A’s Faculty of Medicine & Dentistry, considering the warm welcomes and well wishes this story prompted.

5. Hep C vaccine breakthrough (Feb. 15)
A year of research excellence at the U of A got off to an early start when Michael Houghton, Canada Excellence Research Chair and one of the world’s leading virologists, discovered that a vaccine from a single hepatitis C strain can work against all strains. Houghton’s discovery, which paves the way for a commercial vaccine to prevent future infections, remained the most-read research story of the year.

6. Nurse takes plunge at UAlberta (Nov. 19)
During convocation ceremonies in June and November, we celebrated along with some of the talented graduates of the class of 2012—including nursing graduate Leigh Pinard, a triathlete and former member of the Canadian Forces parachute team. Also popular were special photo features from spring convocation and fall convocation.

7. University remembers Lougheed’s extraordinary life (Sept. 14)
Peter Lougheed, Alberta’s 10th premier, was the student who became a statesman. A giant among U of A alumni who embodied the student experience, he was an extraordinary leader whose legacy lives on to inspire us all.

8. University mourns loss of student athlete (Aug. 29)
In the wake of a sudden loss, professors and fellow students remembered Isaak Kornelsen as a brilliant student, a gifted athlete and a gentle young man.

9. UAlberta, Udacity team up for online learning (Oct. 30)
Coming on the heels of two well-attended presentations at the U of A by Google vice-president and Udacity CEO Sebastian Thrun, this announcement generated plenty of excitement about the future of online learning at the university.

10. Research VP wins top prize (March 21)
It was a banner year for Lorne Babiuk, the U of A’s vice-president of research and a leading researcher in infectious diseases, who received the Canada Gairdner Wightman Award—one of the world’s top prizes in medical science—for his work in developing vaccines and improving global health.

The year in photos