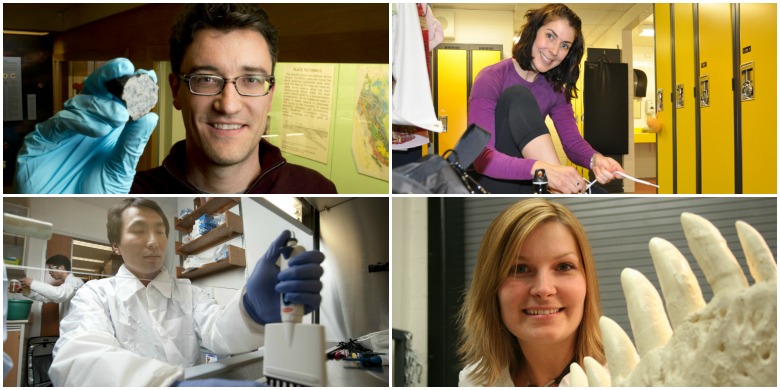 130103-topresearch-banner
Researchers in their element (clockwise from top left): Chris Herd with a meteorite chunk, Marianne Clark in a change room, Miriam Reichel with a toothsome T. Rex fossil, and John Law in the lab where he is working with Michael Houghton to develop a hepatitis C vaccine.

(Edmonton) If anyone deserves a toast for a job well done over the past year, it’s the talented researchers at the University of Alberta. Their bold explorations in their own fields, and their work together in interdisciplinary teams rich in experience and expertise, led to discoveries that will expand the boundaries of knowledge and improve the lives of people in Alberta, in Canada and around the world.

Here are the stories of our researchers and their results that ranked highest among the most-read UAlberta News headlines of 2012.

1. Hep C vaccine breakthrough
If you checked out our top 10 stories of 2012, you already know that virologist Michael Houghton’s groundbreaking discovery generated plenty of interest. If not, here’s your chance to find out what it was all about.

2. Meteorite delivers Martian secrets to UAlberta researcher
Chris Herd’s study of a meteorite blasted from the surface of Mars yielded new insights into the history of the red planet’s atmosphere.

3. Huntington breakthrough
It takes a lot to make researchers jump with excitement in the lab. But that’s what Simonetta Sipione and her team did when they discovered a promising therapy for Huntington’s disease.

4. The stress of undress
Doctoral student Marianne Clark tapped into her own experiences for a study that revealed the naked truth about our discomfort in public change rooms.

5. Nano nod for lab-on-a-chip
Linda Pilarski and Jason Acker showed the promise of nanotechnology with the Domino, an affordable and portable device that can perform the same genetic tests as a fully equipped modern laboratory—and in a fraction of the time.

6. Study busts sports-drink myths
Peter Gill, a Rhodes Scholar from the U of A, was part of an Oxford University study that showed little evidence to back up advertising hype for sport recovery beverages.

7. Diabetes drug may work against Alzheimer’s
Jack Jhamandas and his team found a new use for a drug originally meant to treat diabetes when they discovered it may restore memory in brain cells affected by Alzheimer's disease.

8. TV, devices in kids’ bedrooms linked to poor sleep, obesity
Paul Veugelers and Christina Fung shed new light on how children’s nighttime use of electronics can affect their sleep patterns and risk of obesity.

9. T. Rex’s killer smile revealed
Miriam Reichel looked into the tyrannosaur’s mouth to reveal a dental specialization that was of great benefit for a dinosaur whose preoccupation was ripping other dinosaurs apart.

10. Cracking a superbug’s armour
Microbiologist Mario Feldman and his team got down to the molecular level to pinpoint a weakness in a lethal antibiotic-resistant bacterium that plagues hospitals worldwide.

11. Sight for sore eyes
Ophthalmologist Ian MacDonald and his expert team received $1.3 million for a clinical trial of a promising gene therapy for a rare eye disease that can leave men blind by their 30s.

The year in photos

The top 12 research stories of 2012
Newsroom