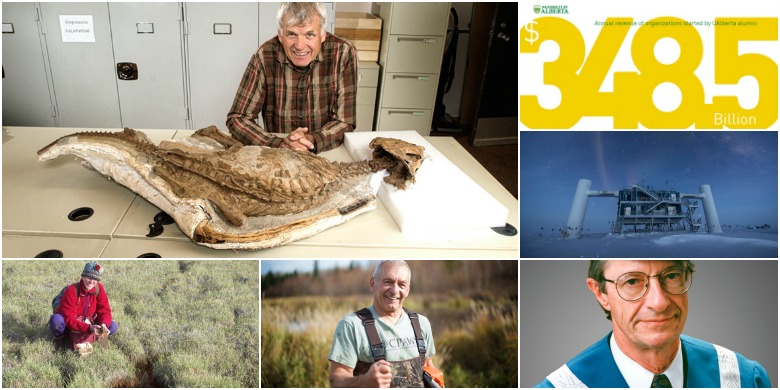 (Edmonton) It was a momentous year for the University of Alberta community. Researchers made discoveries everywhere from the dinosaur bonebeds of Alberta to the ice of Antarctica. The Faculty of Medicine & Dentistry’s centennial year saw the launch of a cyclotron facility to provide vital medical isotopes and the Li Ka Shing Applied Virology Institute to speed new vaccines to market. We cheered on our newest graduates at convocation, we mourned the passing of people who left inspiring legacies, and we created new connections with visitors from around the globe. Here’s a look back at some of the year’s most popular stories.

1. 400-year-old plants reawaken as glaciers recede
Catherine La Farge paid close attention to mosses that seemed to be regenerating after four centuries under ice. And when she proved that they were, the world paid attention to her story.

2. UAlberta alumni-founded organizations a staggering engine of Alberta's prosperity
A landmark study by business professors Tony Briggs and Jennifer Jennings showed the phenomenal economic and social impact of organizations founded by U of A alumni—a job-creating engine that generates annual revenues of $348.5 billion.

3. Business grad makes the world her classroom
Globe-trotting grad Deanna Dow graduated this fall with a BCom and the U of A’s new international learning certificate. We wished her bon voyage as she gets down to business making a better world.

4. Baby dino a once-in-a-lifetime find
In a year rife with dinosaur discoveries, famed paleontologist Philip Currie made one of the best finds of his career—a fossil so pristine, Currie is incorporating it into the U of A’s massive open online course, Dino 101.

5. Discovery could make solar power cheaper, more accessible
Imagine a solar panel you can spray on or print off. That’s what chemistry professor Jillian Buriak and her team did—then they developed a nanoparticle-based “ink” that could make it a reality.

6. Remembering Harry Hole and Lou Hyndman
When the U of A lost two of its most beloved alumni and strongest supporters this year, the campus community joined in celebrating their memory and their enduring impact.

7. Sarah McLachlan gives grads a tribute to remember
After receiving an honorary degree at the U of A’s fall convocation ceremony Nov. 20, the Canadian music icon expressed her gratitude with a breathtaking performance.

8. Brain development differs in children who stutter
Researchers at the U of A’s Institute for Stuttering Treatment and Research shed new light on why people stutter—and helped us better understand the inner workings of the brain. ISTAR’s innovative therapy also helped a young woman overcome stuttering to honour her father’s final wish.

9. UAlberta's freshwater watchdog passes torch to next generation
David Schindler, whose career as an ecologist ranks among the finest in Canadian science, embarked on a journey to new territory in October: a well-earned retirement.

10. Dino 101 registration is now open
The U of A drew on its unparalleled paleontology research to launch its first massive open online course—and made a dinosaur-sized footprint in the world of digital learning.

12. UAlberta strengthens cultural ties with China through exclusive art exhibit
When one of China’s most celebrated artists came to the U of A, it was more than a chance to see his masterpieces on display. It was a rare opportunity to build new cultural, social and economic bonds.

13. Neutrino discovery named 'Breakthrough of the Year'
The year ended with a breakthrough of cosmic proportions, as physicist Darren Grant and his team were among the international IceCube Collaboration whose neutrino-hunting success earned them Physics World magazine’s accolade for the year’s biggest discovery.