‘The world is her oyster now’: Grateful mom thanks ISTAR for giving teen daughter her life again

"Stuttering stole her childhood but it will not take her adolescence and adulthood! ISTAR has given that time back to her to be the best she can be." 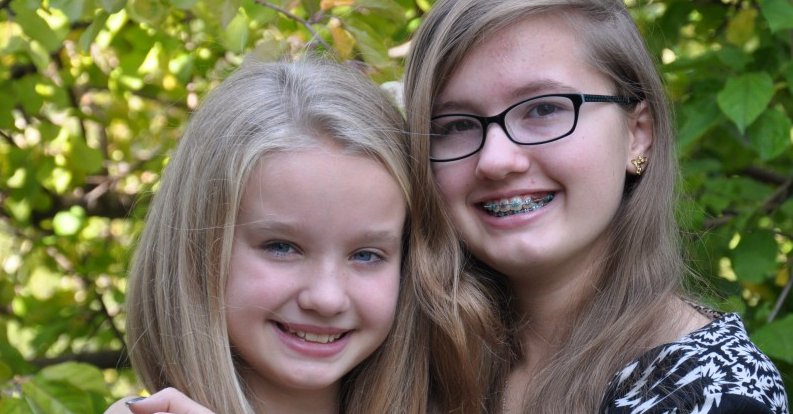 Jaiden (right) with her younger sister.

By LAURIE WANG with reports from MICHELLE*

(Edmonton) “She’ll grow out of it,” people would often say to Michelle about her daughter Jaiden. “Just spit it out!” Michelle was tempted to scream in frustration.

At four years old, Jaiden seemed different to her mom. Michelle noticed she never wanted to play with other kids. Even in playschool, the teacher said she just loved to play by herself in the little kitchen and didn’t like to interact with other kids.

Feeling as though something might be amiss, Michelle sought out speech therapy at the time, but the therapist said that all was common for a four-year-old and that Jaiden would “grow out of it.”

But Jaiden didn’t grow out of it. As the years passed, she got more and more frustrated and it seemed the only time she could communicate clearly was when she was very angry.

“I often would brush her off, or worse, ignore her,” Michelle admitted. “The other kids couldn’t understand her and would leave her out, so she got used to playing alone at recess.”

Jaiden was always very intelligent, as evident from her posters and journal entries growing up. But as the years through school continued, her ability to avoid, change the subject, daydream and ignore teachers grew stronger.

“She became a master of avoidance. She would often go into her own world, pretending she was a fairy rather than pay attention in school. After all, she was very hard to understand when she spoke and while the teachers tried, I have no doubt if I was tuning her out, they were too. She spent most of grades 1, 2 and 3 in a daydream.”

By the time Grade 4 hit, it was obvious to Michelle that something was very wrong. Jaiden was unable to hold a conversation and would only speak at people, not with them. Her lack of attention and jitteriness when speaking continued to affect her grades in school.

ADHD, Asperger’s and Tourette syndrome were ruled out in testing. Stuttering was never brought up as a possibility at this time. In Grade 5, Jaiden did psychological, intelligence and ability testing as recommended by a teacher. The test revealed she was extremely intelligent, achieving the 98th percentile in comprehension. She was a child with the ability to excel at school.

But Jaiden was in a very dark place. She was angry, frustrated and defiant. “I believe her inability to communicate and ask a simple question just made her want to lash out at the world. She was often in tears. She wouldn’t look a person in the eye when speaking to them or when spoken to. She was also selectively mute. She had few friends and didn’t fit in at school at all,” Michelle said.

By this time her grades had eroded so badly, she was no longer passing. Her confidence was destroyed.

“My sweet, intelligent and passionate daughter cocooned herself into the only safe place she knew—her mind,” said Michelle. “After watching my curious, happy child spiral on this downward trajectory to the place she was now, I was extremely fearful she would commit suicide by the time she was an adult.”

“Our only beacon of hope was she still enjoyed being with her family. However, she would never engage with us and was always on the perimeter. I felt like we may be losing her emotionally. She had become depressed and rarely smiled. She was on a slippery slope and I didn’t know how to get her off of it.”

It was at this time that Michelle heard about the Institute for Stuttering Treatment and Research (ISTAR) at the University of Alberta's Faculty of Rehabilitation Medicine through a friend.

“She was a true friend. She defied social convention to keep quiet and out of compassion and kindness, offered me an olive branch in my time of pain and said ‘I heard this show on CBC about this intensive stuttering program at the U of A. This woman spoke about how it has transformed her life,’” Michelle said.

At that point, it was as if a light bulb went off for Michelle. Oh my God! Jaiden stutters!

“The stuttering she exhibited was not in the stereotypical sense of bbbbbbbbbaby. I just thought her brain was working faster than her mouth so she couldn’t get the words out on time. We had lived with this peculiarity of Jaiden’s for so long, and we were always told she’d grow out of it, so it became the norm.”

Jaiden warily but enthusiastically enrolled in the intensive teen workshop at ISTAR.

“I remember leaving her there. The first day they had to do cold calls. After the terror I saw in her eyes, it took all my power to show tough love, to walk away, to leave her in the hands of the professionals and to not run back to make the cold calls for her. I cried for her that day,” Michelle admitted.

However, even though the work was hard, the mornings were early, the cold calls were scary and speaking to strangers was terrifying, Jaiden persevered.

“She did it!” Michelle said. “To this day, she still does daily exercises to maintain fluency. After all, contrary to what we have heard her whole life, this is something she will not outgrow.”

Her parents, teachers and loved ones all saw a transformation in Jaiden. She is your typical lively 14-year-old now.

“She has numerous friends and is constantly increasing her conversation skills to communicate with people. She is willing to ask for directions to the bathroom. She will answer the phone even if she doesn’t know who it is! She will order food at the kiosk. She asks questions. She expresses her opinions. She gets up in front of a crowd and speaks. She joined the school play! Her marks have skyrocketed and she is top of the class,” Michelle beamed.

Michelle shudders at the thought of where Jaiden would be without ISTAR. “Stuttering stole her childhood but it will not take her adolescence and adulthood! ISTAR has given that time back to her to be the best she can be. The world is her oyster now and words cannot describe how very grateful we are that ISTAR exists today.”

These days Jaiden still cries but it is tears of joy and acceptance. Recently, she completed a one-week refresher session at ISTAR. When her mom picked her up, she was in tears.

“Mom, I don’t know,” Jaiden replied. “I’m overwhelmed. It’s just so nice to be around people who get you and are like you. They understand what you’re going through ‘cause they’re going through it too.”

“Jaiden, I think you have found your home.”

We at ISTAR are so grateful to the members of the Elks and the Royal Purple for their financial support. With their help, ISTAR can continue to be "home" to children in need of help for their stuttering.

*Last names have been omitted to respect patient confidentiality.

The Faculty of Rehabilitation Medicine at the University of Alberta

As the only free-standing faculty of rehabilitation medicine in North America, the Faculty of Rehabilitation Medicine’s vision is to be at the forefront of knowledge generation and scholarship in rehabilitation. Through excellent teaching, research and service to the community, the Faculty is committed to enhancing quality of life, promoting participation and autonomy, and improving function for citizens in Alberta and beyond.

‘The world is her oyster now’: Grateful mom thanks ISTAR for giving teen daughter her life again
Newsroom