The year the sun and moon turned blue

How the biggest wildfire North America has ever seen changed the way fires are fought in Alberta today. 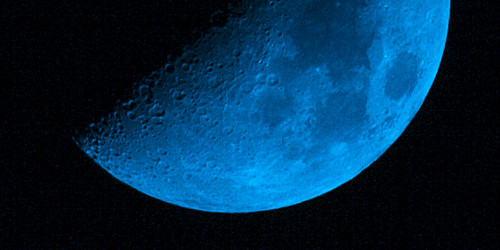 The Chinchaga firestorm, a wildfire that scorched 1.4-million hectares of land in B.C. and Alberta over a five-month span in 1950, was so large that smoke from the burn gave both the sun and moon a blue appearance to gazers across Ontario and the northeastern United States. (Photo courtesy Carl Jones, through Creative Commons Licence)

(Edmonton) Something strange started happening in cities and towns in Ontario and across the northeastern United States in the summer of 1950. In the middle of the day, it started to get dark—so dark, in fact, that cities like Toronto had to turn on their streetlights. The sun turned blue and receded behind a dark haze, sparking fears that the government was testing a secret weapon or worse, that the country was under nuclear attack.

The real explanation was more mundane, but hardly less amazing: a forest fire that spanned northern B.C. and Alberta was emitting a smoky pall that encircled the northern part of the globe, carried by jetstreams to Europe and wrapping back around to the Yukon. More than 60 years later, the Chinchaga firestorm, comprising more than 100 fires that burned close to two million hectares of forest, is still the biggest wildfire on record in North America. And its impact is still being felt in the province today, according to Cordy Tymstra, a PhD student in the Department of Renewable Resources at the University of Alberta.

“There was one fire that covered 1.4 million hectares. Forest rangers in Alberta at the time were forbidden to fight fire anywhere in their district unless it was 10 miles from a town or major transportation corridor,” Tymstra says. “One of the outcomes of the fire was a change to how fires were fought in Alberta. But what it really showed was what a fire can do on the landscape if you didn’t fight it at all. What it showed is that the fire can linger on the landscape—it started in June 1950 and kept burning until it snowed in October.”

Tymstra turned his research into The Chinchaga Firestorm: When the Moon and Sun Turned Blue, a book just published by the University of Alberta Press that brings together historical, scientific and sociological perspectives on the event, including reflections on panicked reactions to the spectacle described in the title.

“Normally we would see red suns as a result of fire smoke, but in this case the particles were of such a size and density, and stayed that way for so long, that the moon and sun appeared blue. The smoke was so high and in an inversion layer, so people couldn’t see or smell it,” Tymstra says. “When people finally found out what was going on, they said, ‘No way, it can’t be smoke from a forest fire in Alberta.’ So there were all these theories, from cloud-seeding to the U.S. testing a new nuclear weapon to doomsday scenarios.”

Tymstra, who also works as a wildfire science co-ordinator for the Government of Alberta, says the Chinchaga fire makes for a useful case study in confronting the challenges of wildfire management in the 21st century. In conducting his research, Tymstra used computer simulation models to recreate how the Chinchaga fire developed and how it behaved over the months that it burned. The exercise was valuable not only in validating these simulation models, but also in improving responses to an increasingly long and busy forest-fire season every year in Alberta.

“[Chinchaga] gives you an indication of what fire can do, and then you throw into the equation climate change. Fires are getting hotter, bigger and faster, and the Chinchaga fire showed this is what can happen if you don’t suppress fire when you can,” he says. “The lessons learned on this fire were the importance of setting policy—in this particular case it changed policy—and how we fight big fires. It’s important to understand how these big fires behave and when you have the opportunity to go in and start to manage a big fire. It’s understanding how often these big fires burn, how they burn and how we can translate that into better decision-making.”

Tymstra adds that wildfires present the added challenge of inhabiting a grey area between natural process and natural disaster.

“When you think about it, we don’t manage tornadoes or hurricanes or earthquakes or floods, but we manage fires. So one of nature’s most powerful forces, we can actually attack,” he said. “It gets really tricky because fire is good and fire is bad. How do you know when and where to allow fire on the landscape when you know you can get these events? We know fire is an ecologically essential process that the boreal forest has evolved with, but how do you find that balance? Which fires shouldn’t you suppress?

“And there’s no fire management agency in the world that can successfully respond to all fires at all times in all places. You have to critically decide which fires are going to get the resources.”

This tension—and the contrast between fire management approaches—has played out in the headlines this summer as fires have once again raged across the western provinces.

“Back then [Chinchaga] was a let-burn zone, and Saskatchewan has the same kind of thing today. They have a big zone where they focus on protecting the values at risk, but for the most part fire is allowed to do its thing,” Tymstra said. “You compare that to Alberta today: we’ve had one of the worst fire seasons in 2015 that I’ve ever seen, but the area we have burned is less than in Saskatchewan.”

The year the sun and moon turned blue
Newsroom