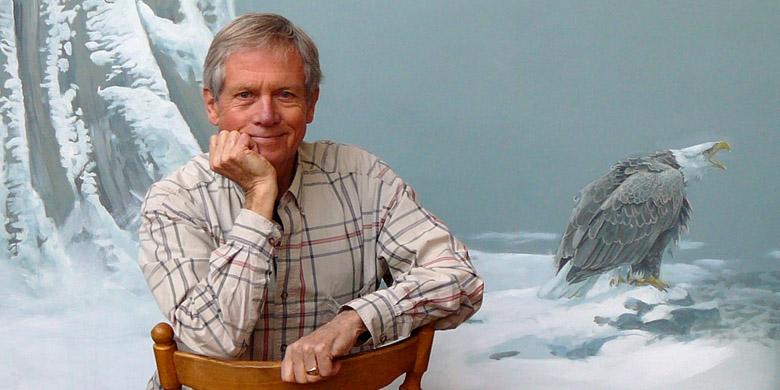 Robert Bateman can’t understand why some people don’t see the forest for the trees.

Take the Glen Valley area of Langley, B.C., for instance, where the renowned wildlife painter and environmentalist recently stopped to visit a 10-hectare forest that’s slated to be sold off and developed to help pay for a new recreation centre.

“They already have a recreation centre, and it’s free,” Bateman says of the forest itself. “All they have to do is go 20 feet outside.”

The issue is symptomatic of modern Canada where families aren’t taking the time to experience and enjoy nature, says Bateman, who is in Edmonton Dec. 11 to deliver a public keynote for Thinking Mountains at Metro Cinema.

Growing up in Toronto, Bateman’s first real mountain experience came in the 1950s when he and a friend took the Greyhound to Victoria and set out for Mount Arrowsmith. Though not a difficult climb—Bateman says he’s a mountain walker, not a technical climber—the excursion set alight a burst of creative energy.

“I remember one day I sat on the peak of Mount Cokely and did six paintings,” he recalls. “They were pretty well all a testament to the mountains we were enjoying.”

Since then, Bateman, 82, has made mountain treks in the Himalayas, climbed 12,000 feet in the Mountains of the Moon in Uganda, gone on packhorse trips through the Canadian Rockies, all the while featuring mountains in numerous paintings. His Edmonton talk, Thinking Like a Mountain, will recall some of these experiences as well as his greater passion for nature.

It’s a passion he doesn’t see in many children and youth who are more likely to watch a movie during a roadtrip through the mountains than enjoy the view. That’s why Bateman recently created the Robert Bateman Centre in Victoria, a foundation designed to support in-nature education initiatives.

“Mountains are a fabulous opportunity. If you get kids on a canoe trip or going on a packhorse trip, that’s transformative and it’s also pleasurable,” says Bateman, who believes humanity is at a turning point in its history with peak oil near the end of growth, one that will involve a return to nature.

“We are going to have to get by with simpler lives and less in the future, and what better way than walking up a mountain and going for a walk in the woods?” he asks.

Zac Robinson, an alpine historian in the Faculty of Physical Education and Recreation, is thrilled to have Bateman—who isn’t even charging a speaker’s fee—give the keynote at Thinking Mountains.

“The underlying premise of the conference and the Canadian Mountain Studies Initiative as a whole is to bring people in from across the disciplines, and here we have somebody who inherently in his day-to-day work as an artist and naturalist does just that,” he says.

Buy tickets to An Evening with Robert Bateman