Neuroscientists find differences in brain activity depending on whether people are outdoors or in a lab. 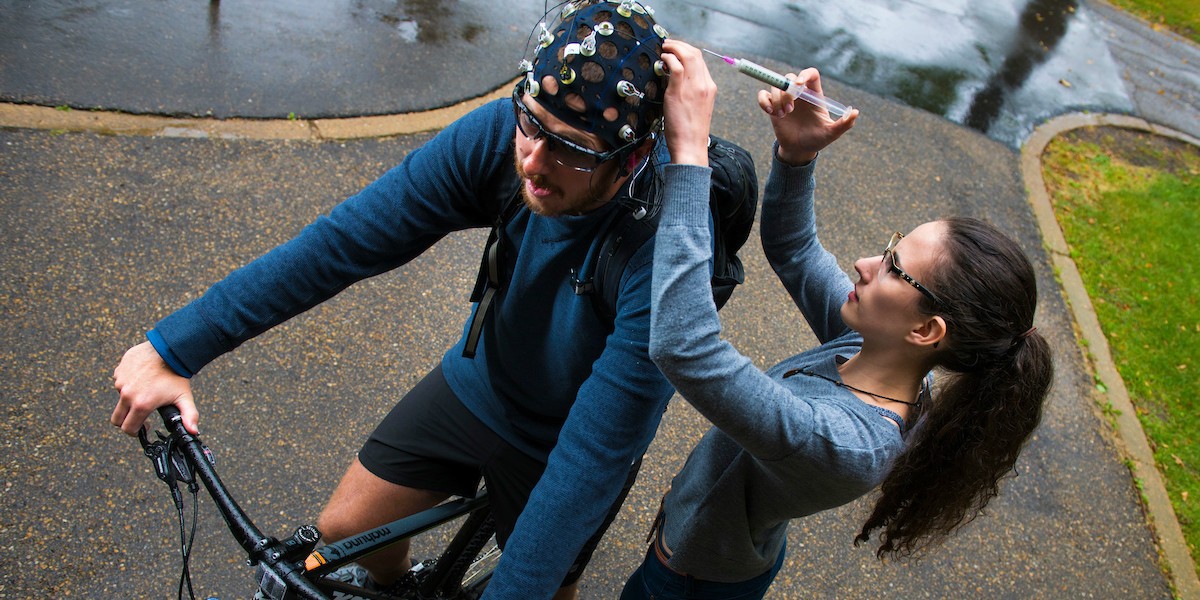 The brain acts much differently when we’re outdoors compared with when we’re inside the lab, a new study shows.

“It happens when we’re doing normal, everyday activities, like riding a bike,” explained Kyle Mathewson, a neuroscientist in the University of Alberta’s Department of Psychology.

Mathewson and his research team put EEG equipment into backpacks and had subjects perform a standard neuroscience task while riding a bike outside. The task involved identifying changes in an otherwise consistent set of stimuli, such as a higher pitch in a series of beep sounds. They had previously performed the same experiment on stationary bikes inside their lab but in the new study, the scientists were able to record laboratory-quality measurements of brain activity outdoors, using portable equipment.

“Something about being outdoors changes brain activity,” said Joanna Scanlon, graduate student and lead author on the study. “In addition to dividing attention between the task and riding a bike, we noticed that brain activity associated with sensing and perceiving information was different when outdoors, which may indicate that the brain is compensating for environmental distractions.”

By putting a portable EEG in a backpack, UAlberta researchers were able to record lab-quality measurements of cyclists' brain activity outdoors.

The study showed that our brains process stimuli, like sounds and sights, differently when we perform the same task outdoors versus inside a lab.

“If we can understand how and what humans are paying attention to in the real world, we can learn more about how our minds work,” said Scanlon. “We can use that information to make places more safe, like roadways.”

“If we want to apply these findings to solve issues in our society, we need to ensure that we understand how the brain works out in the world where humans actually live, work and play,” said Mathewson, who added that almost everything we know about the human brain is learned from studies in very tightly controlled environments.

Next, the researchers will explore how this effect differs in outdoor environments with varying degrees of distraction, such as a quiet path or a busy roadway.

The study, “Taking Off the Training Wheels: Measuring Auditory P3 During Outdoor Cycling Using an Active Wet EEG System,” was published in a special issue of Brain Research.