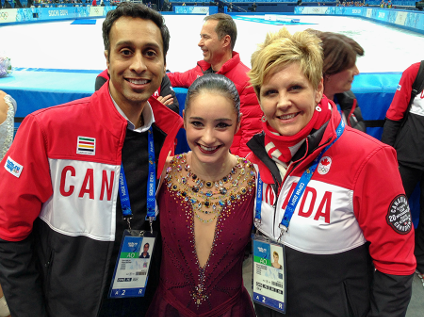 When the team wins a medal, you’re a part of that even though you’re not on the stage with them. You know you’ve helped someone else achieve their goals and develop their potential.

This week's Vitals: Keeping patients ready to fight for Gold

What is it like to be responsible for the health of Olympic athletes? Marni Wesner shares her experience.

Marni Wesner (far right) was with the Canada Women's Basketball Team in France, where they played in June 2016.

The Olympic teams representing Canada in Rio are not only groups of accomplished athletes—there are many other members behind the scenes, working to help them reach the podium. Watching over the health of the Women’s National Basketball team is Marni Wesner, one of those unseen but essential characters in these competitors’ journey.

Wesner, associate clinical professor at the Faculty of Medicine & Dentistry’s Department of Family Medicine and physician at the Glen Sather Sports Medicine Clinic, is a veteran in Olympic athletes’ care. Prior to becoming the Edmonton lead physician of the basketball team, she also worked with the Canadian National Teams of hockey (eight years) and figure skating (12 years). Wesner has worked intensively on their processes to prepare for the Olympic Games and qualifiers, and has traveled with all groups to local and international competitions.

Her experience has taught her that athletes are very similar to any other patient when it comes to providing medical care for them, with the exception of their possibility to heal faster due to more resources and their entire dedication to recovery. “Sometimes people hear in the news that an athlete is getting better in a short period of time, and they think ‘how come I’m not?’” says Wesner. “They deal with their medical issues the same way they deal with training, which is different from the rest of us who have to go to work and take care of the kids. For us recovery often becomes a second-place thing.”

Having managed the care of competitors in different sports, Wesner sees that the main difference between them lies in the effects of injuries. “If you’re part of a 20-member hockey team then you can recover and they can adjust the lines a little easier than if you are the female partner of a pairs skating team—if you’re out, the entire couple is out,” she says. “But the impact of the injury on the athlete and the recovery process don’t change.”

Even though the eyes of the world are on the athletes, the pressure of the Olympic Games reaches all staff as well and it builds as the event gets closer. With so much at stake for the team, physicians must be resourceful to find ways to assist athletes but there is no room for error, especially when it comes to the players’ diagnosis and treatment. “There is a lot more pressure to prevent injuries and not everything can be prevented,” Wesner says. “For example in basketball, they sprain an ankle all the time on the court. They still have to train and practice, so there’s a risk. It’s all about mitigating that risk as much as you can.”

“What you do with the athlete through the time course of the ‘quad’ [quadrennial, or the four-year cycle of the Olympics] changes. During the first year your need to mediate potential injuries or problems is not as significant as when you’re closer to the Olympics.”

Rooting for the person inside the athlete

To Wesner, being part of an athlete’s accomplishment is the best reward from the job: “When the team wins a medal, you’re a part of that even though you’re not on the stage with them. You know you’ve helped someone else achieve their goals and develop their potential.”

Just like many physicians develop a relationship with their patients, she likes to deal with them as individuals beyond the glory of the contenders that the public sees. For example, Wesner remembers the Torino Olympics (2006) not just because the National Hockey Team won the Gold medal, but also for the cultural experiences, such as special meals enjoyed together after training and outside the event. Her most meaningful memories with each of the teams have come from the moments she shares with them, and the conversations where she gets to know the athletes better while helping them recover from a game.

“They are different from the ‘weekend warrior’ or the recreational athlete only because of their focus and their ability for sports. But each of those people still puts their pants on one leg at a time, and that person still has fears and emotions, just like any other person out there,” adds Wesner.

“You get a chance to talk to them, nothing medical-related or work-related. So you develop a close bond, almost a friendship.”

In the end, they’re not so different from the rest of us.

Meet our partners in patient care

The University of Alberta’s Glen Sather Sports Medicine Clinic is a centre of the Faculty of Rehabilitation Medicine, serving the needs of athletes, recreational players and active individuals since its inauguration in 1988.

Its mission is to promote and deliver comprehensive patient-centred sport, exercise and musculoskeletal care, through an integrated interdisciplinary approach that emphasizes evidence based clinical practice, education, research and community engagement, as well as the promotion of lifelong health through prevention, physical activity and a healthy lifestyle.