Tiny snapping worms make one of the loudest noises in the ocean, study shows 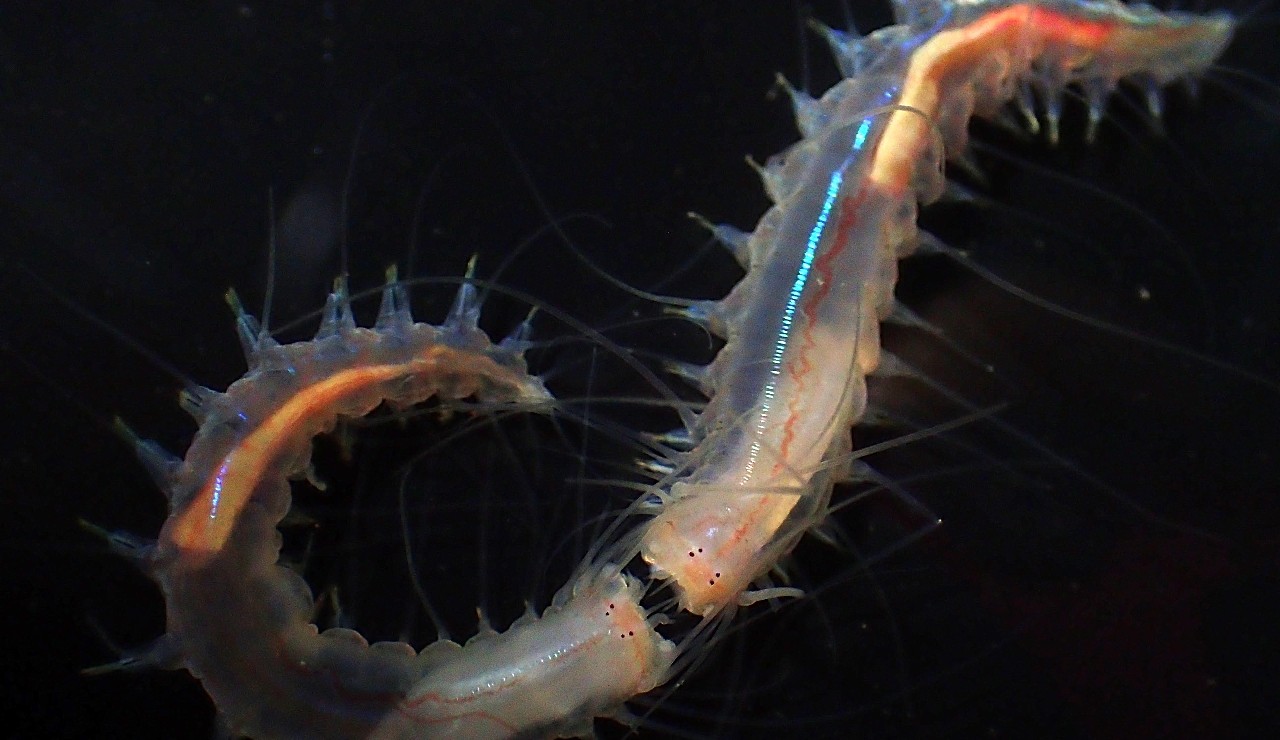 Two worms square off in a "mouth fight" using their ability to produce a snapping noise that clocks in at up to 157 decibels—among the loudest sounds ever measured in marine animals. (Photo: Ryutaro Goto)

When marine biologist Richard Palmer saw a video of sea-dwelling worms snapping at each other and making one of the loudest sounds ever measured in aquatic animals, he couldn’t believe his ears.

“The biomechanics allowing the animals to do this are both puzzling and extraordinary,” said Palmer, a professor emeritus at the University of Alberta. “When I first saw their video and audio recordings, my eyes just popped out of my head because it was so unexpected.”

The video had been sent to him by Ryutaro Goto, a Japanese scientist who asked him to help figure out how these invertebrates were capable of producing such loud sounds.

The worms were first discovered in the finger-like protuberances of glass sea sponges collected off the coast of Japan during a 2017 dredging expedition.

Isao Hirabayashi had been the first to hear the sound when a shipment of the newly discovered species was brought to the Kushimoto Marine Park, where he was the curator. Together with Goto, a marine biology professor from the University of Kyoto, they recorded the mysterious sounds and found they were made by the worms.

In a new Current Biology study describing the animal’s acoustic capabilities, Palmer and his Japanese collaborators explain the snapping sounds are a way for the worms to protect their dwellings. When placed close to one another, the worms approach each other with an open mouth and snap—a behaviour the researchers described as “mouth fighting.”

Many water-dwelling animals, including mammals, fish, insects and crustaceans, make noises but it is the first time a soft-bodied invertebrate has been shown to do so.

“The real challenge was figuring out how a soft-bodied animal like a worm—which is basically a hollow, muscular tube—could possibly make such loud sounds,” Palmer said.

He believes the sounds come from “cavitation bubbles” generated by an elaborate array of muscles in the worm’s pharynx.

“It’s like trying to suck a smoothie through a paper straw,” Palmer explained. “When it gets a little bit soft at the end, the tip collapses. It doesn't take much force to make it collapse, but if you try to suck harder and harder, you build up this immense negative pressure. When the worm finally pops the valve open, it happens so fast that the water can't fill the space, and the sides of that space collapse together in a point, creating this explosive release of energy in the form of sound.”

Palmer and his collaborators hope to validate their hypothesis and further study the surprising worms during future dredging expeditions.

“It's just an incredibly cool animal with quite the unexpected behaviour,” Palmer added. “I’ve shown the videos to biologists who study invertebrates and their reaction is always the same: they shake their heads in wonder.”

Tiny snapping worms make one of the loudest noises in the ocean, study shows