Tipi raised to recognize relationship between First Nations, U of A

Powerful symbol of First Nations culture takes its place in front of the Faculty of Native Studies. 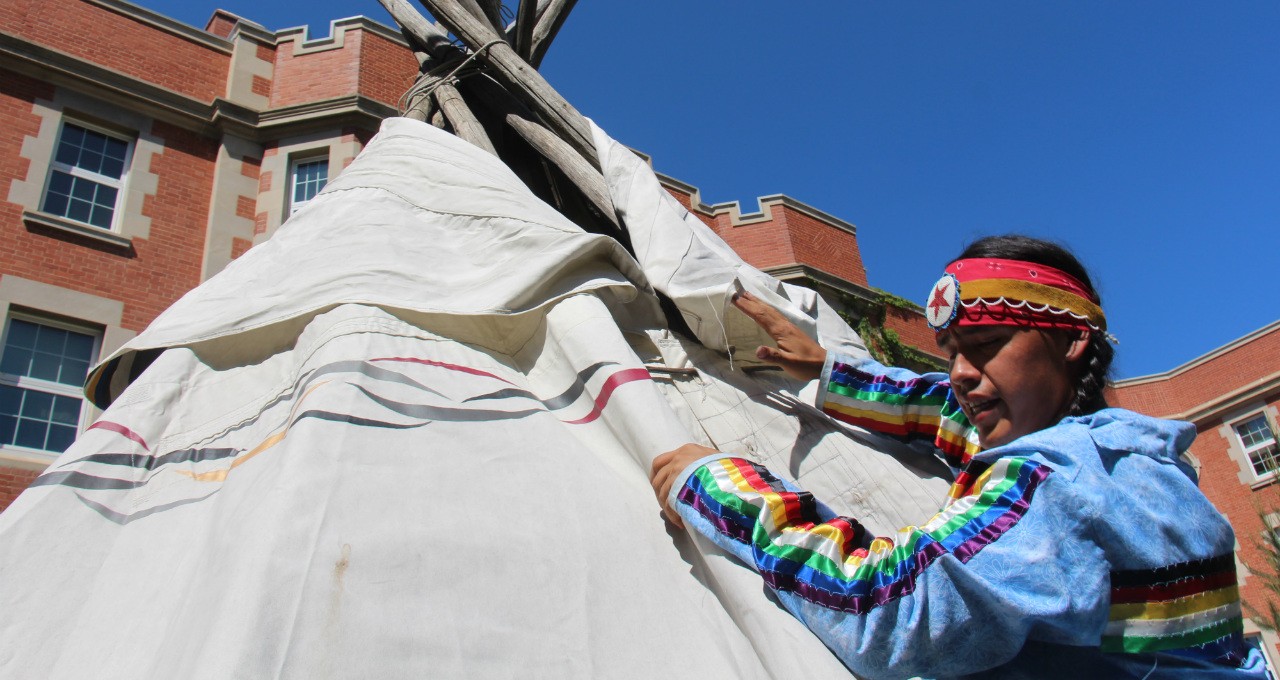 Joe Cardinal of the Alexis Nakota Sioux Nation helps stitch the painted canvas around the tipi that was raised today in front of Pembina Hall, home of the U of A's Faculty of Native Studies. (Photo: Jordan Cook)

A symbol recognizing the relationship between First Nations people and the University of Alberta was raised on campus today.

Under the guidance of Elder Ricky Cardinal from the Alexis Nakota Sioux Nation, Joe Cardinal and more than 50 students, staff and community members raised a tipi in front of Pembina Hall, which houses the Faculty of Native Studies.

“The tipi is shaped like a skirt, and that represents a mother’s love, always surrounding and protecting you,” said Joe Cardinal, who also shared tipi teachings with the crowd. “And once you go in, you humble yourself, you bow to get in through the door.”

“For many people, what’s so meaningful about the tipi is its round shape, as opposed to the straight walls of the classrooms and other buildings on campus,” said James Dempsey, a faculty member.

Reg Cardinal, the assistant dean of administration for the faculty, said the entire university community should feel comfortable interacting with it.

“[The tipi is] there for them if they want to use it. We encourage people to enter the tipi to study, take photographs, pray, smudge and visit," he said.

A tipi has stood at this location since the faculty moved into Pembina Hall in 2006. Every year before spring convocation, a celebration takes place to put on the canvas cover. After the university’s open house, typically in October, the canvas cover is removed, while the poles remain year-round.

“For most people, the tipi is instantly recognizable, even without knowing the history or meaning behind it,” said Dempsey.

The tipi that now sits outside of Pembina Hall was first erected in 2013 to honour the 25th anniversary of the creation of the Faculty of Native Studies. It was made by inmates at the Pê Sâkâstêw Centre, a minimum-security correctional healing lodge located in Mâskwâcîs, Alberta.

The tipi was then painted by Kristine Wray, the first student to graduate, in 2006, with a joint BA in Native studies and BSc in environmental and conservation sciences. Wray, who is now a PhD student in the Faculty of Agricultural, Life and Environmental Sciences, created the tipi design through consultations with the faculty and Elders.

“It was my first opportunity to collaborate with a ‘client,’” Wray said, “The initial design underwent three revisions at the faculty level and then a final revision after consulting with Elder Cecil Crier. Overall it was a very positive process.”

There has been a tipi on campus since the ‘90s. The tipi that was covered today is the third that was raised. The second one was a gift to the faculty from Elder Florida Thunder and painted by Tracy Bear, who was a student at the time and is now a faculty member in the Faculty of Native Studies. It had to be replaced in 2013 due to wear and tear after seven summers on display.

Tipi raised to recognize relationship between First Nations, U of A